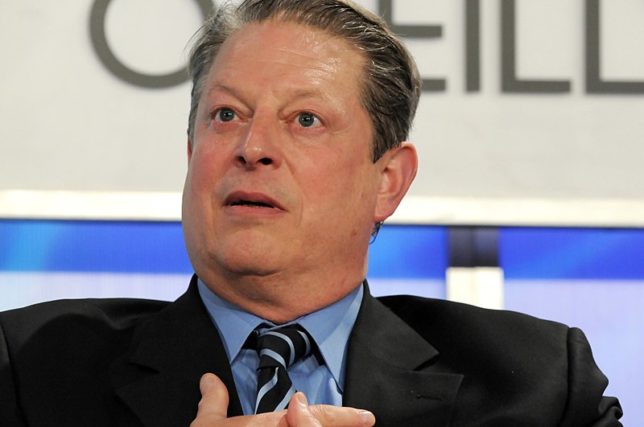 An anecdote widely attributed to (but perhaps not originating with) Milton Friedman holds that the late, great Nobel Prize laureate was touring a developing nation and happened upon a public works project. To make way for the new road or canal or whatever, platoons of workers using hand shovels were laboriously moving the dirt and rocks from one spot to another. Perplexed by this absurdly primitive approach, Friedman supposedly asked why the government wasn’t using mechanized earthmoving equipment instead. His guide was appalled by the suggestion: “If we used machines then we’d lose all of these jobs!”

“Ah, I thought you were trying to create a road,” Friedman responded. “If the objective is to create jobs, then why not take away the shovels and make everyone dig with spoons?”

Tell this story to Al Gore and he might not understand the high school economics lesson behind the joke.

In 2006 (ironically the year Friedman died), our former vice president founded the Climate Reality Project (CRP) to promote apocalyptic climate alarmism. In November 2016 the Africa branch of CRP issued a report condemning nuclear energy as “bad for the environment,” suggesting instead that the often desperately poor people of the African continent should turn their lights on with “sun, water and wind” energy.

I say “turn the lights on” rather than “keep them on” because the International Energy Agency reported late last year that 800 million people on our globe still live without access to electricity and that 590 million of them were in Africa. The CRP wasn’t happy because at least 17 African nations were supposedly in the process of (or looking seriously at) addressing this humanitarian crisis with nuclear energy programs.

Even the lefties at the Union of Concerned Scientists grudgingly admitted that nuclear plants provide 20 percent of American power and are “the single largest source of low-carbon electricity in the United States.” One might have thought the carbon-phobic Climate Reality Projectors would have advocated for nuclear power, recommending to the Africans a carbonless path to power already successfully in use by the rich and (not coincidentally) electrified world.

But alas, to get those 590 million Africans out of the 19th century, the CRP Africa report suggested instead some spoon-sized economics:

Data gathered by Earthlife Africa shows that nuclear energy creates the least jobs per megawatt when compared to all other forms of electricity generation. In Africa, where we have high unemployment statistics and a young population that will need jobs, our governments should take job creation and employment into consideration when making decisions regarding electricity generation.

Underneath this statement, the report provided a table demonstrating that just 0.5 worker was needed to produce a single megawatt of electricity, while wind (4.8 jobs per MW) and solar (35.4 jobs per MW) were shown to be significantly more labor intensive.

If Milton were still with us, then he might waggishly tell Gore he could get this up to tens of thousands of jobs per megawatt if they just gave all the youngsters tiny hand-crank generators.

For more information on the Climate Reality Project, please check out the profile at InfluenceWatch. Those unfamiliar with the marvelous Milton Friedman might want to begin with Capitalism and Freedom, a book that turned me and countless others into libertarians. Those still unfamiliar with Al Gore would be quite kind if they sent me a sample of the demonstrably good stuff they’ve been drinking.