Billionaire donor James Simons is an interesting example of active and engaged philanthropy: a mathematician actively involved in advancing research through his Institute. 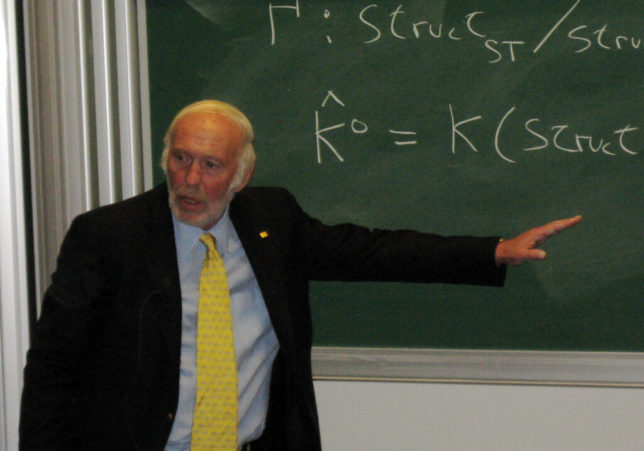 This article originally appeared in Philanthropy Daily on July 29, 2019.

Of all the projects philanthropists fund, perhaps the least controversial are foundations devoted to science. If a donor gives money to build telescopes or support vaccines, only flat earthers and anti-vaxxers would complain.

But the Simons Foundation recently launched the Flatiron Institute to solve complicated problems in mathematics. D.T. Max examines the creation of the institute in an article for the New Yorker.

The Simons Foundation is best known for two online magazines they produce about science: Quanta Magazine, which is about math, and Spectrum, which covers autism research. I have read articles in Quanta Magazine, and a mathematician I know tells me they are sound, but I confess that as a history major, I don’t fully understand them. Nevertheless, they do a good job in keeping the general public apprised of news about mathematics.

James B. Simons, born in 1938, created the Simons Foundation. Simons got his doctorate in math in 1961 and then went to work for the Institute for Defense Analyses—the think tank for intelligence agencies—doing research in cryptography. Simons was fired from the institute in 1968 for telling Newsweek that he was a Vietnam War opponent who would only work on personal projects for the duration of the war.

Simons then became chairman of the math department at the State University of New York (Stony Brook), but decided he wanted to make big money in the stock market.

Simons’s great insight was that having a hedge fund that hired highly-trained scientists and giving them giant “big-iron” computers to work on could be highly profitable. He founded Renaissance Technologies, which became a very successful hedge fund. (Its best-known product, the Medallion Fund, returns 80 percent a year.) Simons has a sufficiently large share of Renaissance from which he earns around $1.9 billion a year, even though he’s retired.

Perhaps the best-known alumnus of Renaissance Technologies is Robert Mercer, a conservative whose wealth created the Mercer Family Foundation. Mercer was not a founder of Renaissance, but was brought in to the company in 1993 to assist with the firm’s speech-recognition programs.

Simons is a liberal who donated $26 million to Democrats in the 2016 election cycle. But he says of Mercer, “I like him”—although Simons did nothing to stop the Renaissance board from pushing Mercer out when he became highly controversial for funding Steve Bannon and Breitbart News.

Although Simons has many of the favorite toys of the rich—a giant apartment in New York City, a 224-foot yacht named after the great Greek mathematician, Archimedes—he decided to become a philanthropist in the mid-nineties.

According to Max, Simons had several projects when he started giving his money away—autism research, funding a large telescope in Chile. But Simons was unhappy because he wasn’t doing science, which was much more fun than evaluating grant proposals. One of Simons’s cousins told Max “he would say that he had lots of projects, but no one project.”

In 2012, Simons convened a group of top thinkers to advise him on the best ways to spend his fortune. The winner, Duke University mathematician Ingrid Daubechies, suggested that there needed to be a center for reinterpreting existing data as the basis for new discoveries. Simons liked Daubechies’ idea, but rather than funding an institute at a university, he decided to create the Flatiron Institute and make it a division of his foundation.

So far, Simons has hired 91 fellows and plans to have 200, or as many as the Institute for Advanced Study in Princeton. He pays substantially more than universities do, and fellows don’t have to spend any time writing grant applications, to free them up to do science. In addition, fellows only work three days a week for the Simons Foundation, so they can retain ties with their former universities.

So here we have a donor, with a doctorate in mathematics, creating an organization that will free mathematicians to spend their days doing math. What’s wrong with that?

Max quotes several liberal critics of philanthropy who splutter that donors shouldn’t have their own ideas, that they should meekly surrender their wealth so the great and the good can spend it on causes experts find acceptable.

“Private foundations are a plutocratic exercise of power that’s unaccountable, nontransparent, donor-directed, and generously tax-subsidized,” said Stanford’s Rob Reich. “This seems like a very peculiar institutional and organizational form to champion in a democratic society.”

No. The reason for donor intent is that donors can pursue their own projects, some of which will succeed and others of which will fail. People who create great fortunes have the right to determine how their money is used. The greater the variety of projects donors fund, the higher the likelihood that these projects will produce knowledge that will make our country better.

I don’t have the knowledge to judge whether the projects funded by the Simons Foundation are the best way to fund mathematical research. But I respect James Simons’ judgment that they’re worth doing.

James Simons deserves credit for being a donor deeply involved with how his wealth is used. We need more donors as active in their philanthropies as he is with the Simons Foundation and the Flatiron Institute.