A Hero of Conservative Philanthropy: The Bradley Foundation’s Dan Schmidt 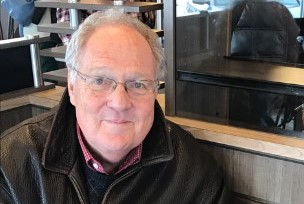 Schmidt, on the way to a junior-league hockey game, at a Tim Horton’s in Brandon, Manitoba, earlier this year.
by Michael E. Hartmann

In 1985, something big occurred in the world of conservative philanthropy. Rockwell International bought Milwaukee’s Allen-Bradley Company for $1.65 billion. One of the trusts that owned the company then became the Lynde and Harry Bradley Foundation, named in honor of the two brothers who founded the company and enjoying $290 million in assets at the time. The foundation’s board almost immediately hired Mike Joyce of the John M. Olin Foundation to come to Milwaukee and run the new philanthropy. Joyce brought one staffer with him from Olin and hired another, highly recommended local person to join them: Dan Schmidt.

Schmidt was a high-level administrator at Marquette University, where he had earlier earned his Ph.D. in history. At the end of last month, this son of a postman retired from Bradley as its vice president for program after more than three decades of service.

Schmidt has helped Bradley become one of the country’s most-influential—and effective—conservative policy-oriented foundations. (See the Philanthropy Roundtable’s study of the Bradley and Olin foundations, How Two Foundations Reshaped America.) Perhaps only one or two persons in America can match his experience in and knowledge of conservative philanthropy.

He played a very significant role in most of Bradley’s successful grantmaking strategies, including the expansion of educational options for low-income parents, first in Milwaukee and then elsewhere around the country; the reform of government-assistance programs in a way that affirms the dignity of work, first in Wisconsin and then nationally; and securing a place for faith in the public square.

Schmidt also played a large role in Bradley’s contribution to the construction of Miller Park, which helped ensure the Brewers baseball club’s continued presence in Milwaukee. As well, he spearheaded creation in 1989 of the Bradley Commission on History in Schools; the annual Bradley Symposium in Washington, D.C.; and the 2008 Bradley Project on America’s National Identity, which presaged many debates now roiling the U.S. and all the West.

In the early 2000s, he loyally helped carry Bradley through an unfortunate period of turbulence, including service as its acting president. I personally have been blessed to work for Schmidt at Bradley since just before that time. It was a blessing mostly because of the fun I and others had with him, but also because of what we learned from him.

Stylistically, Bradley’s philanthropic influence has been better and more effectively wielded because of his humility, a virtue that can be tested when one is besieged by flatterers seeking largesse. Unlike so many others in the sector, Schmidt—an avid fan of hockey, a team sport—never pushed himself forward, perhaps sometimes to his detriment.

Bradley, its grantees, and their shared aims have also benefited from Schmidt’s calm presence, an attribute that can be challenged by the hustle and bustle of a high profile in the policy arena; from his approachability, which is difficult to maintain when many want to approach; from his fairness, without which giving money away doesn’t matter much and can even harm the larger effort; and from his quick smile and humor, which shares a root word with humility. (Schmidt could confirm that, I bet.)

Substantively, he believes history matters. Few could so quickly grasp the relevance of the Treaty of Küçük Kaynarca, the Sykes-Picot Treaty, and the French Fourth Republic to contemporary issues, but he could. His references to such historical facts were always relevant to what was being discussed, though their relevance usually only became clear to me after Googling them afterwards.

Schmidt sees great peril in “presentism”—the notion that contemporary views of enduring human problems are all that matters—and he decries the arrogance that often underlies it.

To humble people like him for whom history matters, institutions matter too. They have longer lifetimes than we do, and the loss of trust in them bodes ill for all of us. Schmidt thinks this trust should be restored and that the institutions of philanthropy can and should look for ways to help restore it.

He believes in paying attention to the essences of things. Whenever a complaint arose about a petty matter, he would give it a hearing only if it really went to the essence of the enterprise. If it did, then he would react.

Relatedly, he believes in and speaks of identity—of us as human beings, in families; of us as Americans, in the West; of us as conservatives, in a tradition worthy of respect as we apply it in current circumstances.

He would also reference a “communion of saints” in various contexts. They are made up of those individuals who precede us—in secular contexts, the Founders, the intellectual godfathers of conservatism, and Bradley board members; and in a religious context, real-life saints. Our predecessors were not stupid, and current expertise, however evidence-driven, does not render them moot. At core, the questions with which they grappled remain with us now. Their answers can help us.

For Schmidt, religion matters—not just for saving our souls, but also for seeing the world clearly. We need to grasp religion as a motivating factor in human behavior, including in international affairs, because it offers us all a path toward the transcendent.

The essence of philanthropy, Schmidt would often recall, is generosity. He himself has a generosity of spirit. The lessons borne of that spirit should be more widely shared, and emulated, by individuals and institutions. They should not be dismissed as platitudinous. They should more often be put into practice, personally and professionally, including as part of conservative philanthropy’s future.

Hartmann is a senior fellow and director of the new Center for Strategic Giving at the Capital Research Center in Washington, D.C. He served for more than 18 years in various positions on the program staff of The Bradley Foundation, including most recently as its director of research.