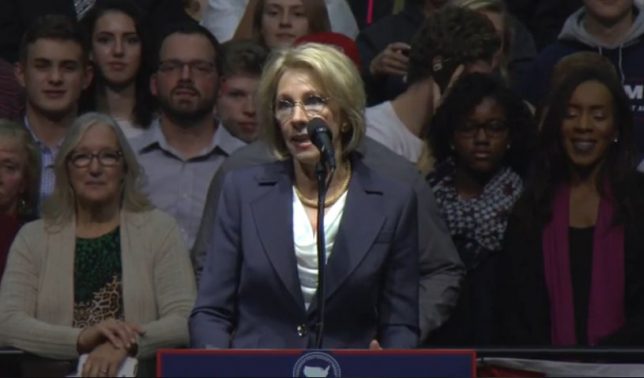 This article originally appeared in Philanthropy Daily on December 18, 2018.

You can tell a biased book or article by the way its author describes grants given by someone of opposing political views. Jane Mayer provides a perfect example of this in Dark Money, when she says that the Bradley Foundation’s education grantmaking constituted “an all-out assault on teachers’ unions and traditional public schools.”

The idea that Bradley Foundation program officers would contribute to a private scholarship program, not because they’re militants, but because they thought that helping deserving parents pay for tuition to private school was the right thing to do is a notion alien to her. (Conservatives, in Mayer’s eyes, are not allowed to be compassionate.)

You can see similar biases in this article by Sam Tanenhaus from Vanity Fair. Tanenhaus at one time had the reputation of being someone who, if not conservative, was at least fair to the right because he wrote a biography of Whittaker Chambers. But his subsequent 2010 book, The Death of Conservatism, argued that conservatism was completely destroyed by the triumph of Barack Obama in 2008. Should you want to buy Tanenhaus’s book, Amazon will happily sell it to you for $1.98.

In his Vanity Fair article, Tanenhaus portrays Betsy DeVos’ philanthropy in a way in which ignores the family foundation’s significant support of local charities and nonpartisan community institutions, in favor of presenting DeVos as a right-wing fanatic, manipulating American public policy through politicly motivated philanthropy.

His argument is as follows: Secretary of Education Betsy DeVos, who was born Betsy Prince, is a strong believer in school choice and promoting private schools. Her brother is Erik Prince, who founded the military contractor originally known as Blackwater (which has been renamed). He believes in “private war.”

From this, Tanenhaus concludes that DeVos family’s philanthropy is a thinly veiled attempt to bring about widespread privatization of what are currently considered government functions, purely for the profit of the businesses (and families) who would supply these services in lieu of the government.

On the various undertakings of the DeVos family, Tanenhaus concludes:

“These are not experiments or improvisations. They are the advanced stages of a plan of privatization that reaches back decades. The DeVoses’ ideal, ‘selling America,’ today can often mean selling it out—and selling it off, piece by piece..”

The wealth of the DeVos family comes from Amway—founded by Richard DeVos Sr. (1926-2018) and Jay Van Andel—whose products are sold by independent contractors. As Tanenhaus notes, the Federal Trade Commission once investigated Amway, and concluded it wasn’t a multi-level marketing scheme. This, to Tanenhaus, provides further irrefutable evidence of the malicious motives of the entire family.

Shandra Martinez wrote about DeVos family giving in this 2016 article for the Grand Rapids Press. She says that 2013 form 990s show DeVos giving by the five foundations totaling $90.9 million, with 66 percent of the funds going to organizations based in Grand Rapids. Public policy organizations certainly received their share. The American Enterprise Institute and the Heritage Foundation received seven-figure grants from the DeVoses, and the Mackinac Center and the Grand Rapids-based Acton Institute received six-figure grants.

But the primary purpose of DeVos grantmaking is to serve Grand Rapids. As Rich Docksai noted in this 2016 piece from Inside Philanthropy, one of the organizations that benefitted from the charity of the DeVos family is the Helen DeVos Children’s Hospital, created in the 1980s thanks to a $50 million donation from the DeVos family. Tanenhaus doesn’t mention the hospital, probably because a family that gives to hospitals just might not be single-mindedly focused on advancing the conservative agenda.

Another favorite DeVos charity is ArtPrize, an annual arts competition that fills the streets of Grand Rapids in September and October every year.[1] This organization, created by Rich DeVos, received a $5 million loan from the Dick and Betsy DeVos Foundation in 2015 as a program-related investment; the foundation subsequently forgave $1.5 million. The ArtPrize website says that they receive 16 percent of their $3.5 million budget from DeVos charities. Tanenhaus doesn’t mention ArtPrize however, because it doesn’t fit with his constricted view of the DeVoses as “a driving force on the far right.”

Of course the DeVos family, as major donors to the conservative movement, should have their activities subject to press scrutiny. But they also deserve fair scrutiny—which means journalists should write about they are actually doing with their wealth, and not bind them in a rigid ideological straitjacket.

[1] John J. Miller wrote a very good article about ArtPrize that appeared in Philanthropy in 2011, but that article is no longer available because of the Philanthropy Roundtable’s decision to remove everything from their website published by the Roundtable prior to 2013.