A Devil’s Dictionary of the Left

A not completely tongue-in-cheek lexicon of leftist Newspeak 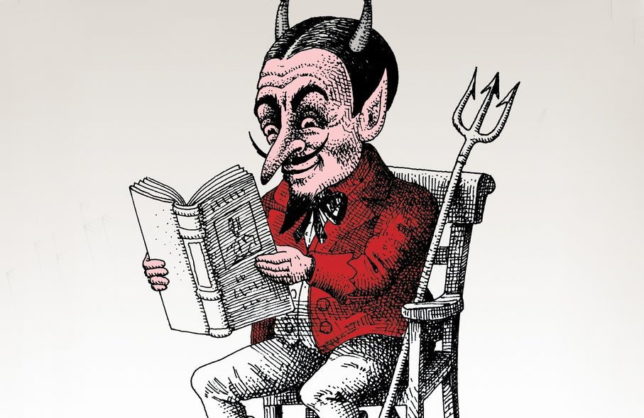 From the cover of the University of Georgia Press edition of the Devil’s Dictionary.
by Jon Rodeback

For Americans outside the Beltway, understanding national politics is often challenging if not impossible. The mainstream media, politicians, and the talking heads on political shows have developed their own distortion of American English to obscure, confuse, and mislead anyone not inducted into their elite club. Here’s a roundup of some of the more abused terms, translated to American English.

Some translations are more serious than others. As with everything in national politics, every entry should be taken with a grain—or pound—of salt.

anti-racism. A movement to reinstitute racism, with Marxist overtones.

bill name. A description of approximately the opposite of a piece of legislation’s real effect if enacted (e.g., Affordable Care Act).

climate change. A marketing phrase used to express the quasi-religious pseudo-scientific belief that humans are the source of all evil on earth.

Critical Race Theory. The I Ching of the far Left. Other than its foundational principles and proponents, a theory that has absolutely no relation to Marxism.

democracy. Unitary rule by the radical-left wing of the Democratic Party.

Democrat. A useful idiot, with a nonzero chance of evolving into a higher life form (e.g., socialist).

Democratic Party. A disorganized collection of useful idiots who provide cover for the far Left.

equitable. Euphemism for the equality of outcome promised by communism, but never delivered, except in death.

extreme. Anything to the political right of the far Left.

fascist. Anything to the political right of the far Left. Not to be confused with Benito Mussolini’s National Fascist Party, a left-wing nationalist (and anti-communist) political party in Italy. See also “Nazi.”

Green New Deal. A comprehensive plan to eradicate all evil in America, beginning with anyone who works, owns property, consumes food, or uses electricity or petroleum products.

green. Any practice or policy promoted as safe for the environment that actually causes greater environmental harm (e.g., windmills, solar farms, and electric vehicles) than the conventional alternatives.

gun control. The belief that a physical object is inherently guilty of violent crimes—especially murder—in the past, present, or future.

homophobe. A person who does not fully accept, endorse, and promote the gay lifestyle and gay movement, not to be confused with a person who fears homosexuals or homosexuality.

illegal alien. Future Democratic voter. Term considered discriminatory because it is too accurate. Currently preferred term by the Left is “undocumented noncitizen.”

judicial reform. Making the courts safe for the Left.

Nazi. Anything to the political right of the far Left. Not to be confused with Hitler’s National Socialist Party, a far-left nationalist (and anti-communist) political party that competed with the German Communist Party, another far-left political party, for control of Germany after World War I.

nonpartisan. Unrelated to the political center or right.

police officer. A member of an armed occupying force.

racism. Anything Democrats or leftists don’t like, not to be confused with actual discrimination based on race or skin color.

smart. A policy or product that is inherently so foolish, ill-considered, uneconomic, or poorly designed that it requires special branding to be sold to the public.

United States of America. The source of all evil in the world.

U.S. flag. A symbol of the oppression of freedom and individual rights historically promoted and defended by the United States throughout the world.

white privilege. A phrase used to condemn anything positive associated with American, Western, or Judeo-Christian values of work, self-sufficiency, self-responsibility, private property ownership, and popular sovereignty whereby individuals work to improve their own circumstances, take responsibility for their own actions, and govern themselves. Also applied to conservative non-Caucasians.