After 16 years as a philanthropic executive, he talks to Michael E. Hartmann about Jack Murdock and his fellow Tektronix founder Howard Vollum, the opportunities and challenges of planning for a foundation to exist in perpetuity, and the consequences of ideas, both good and bad. 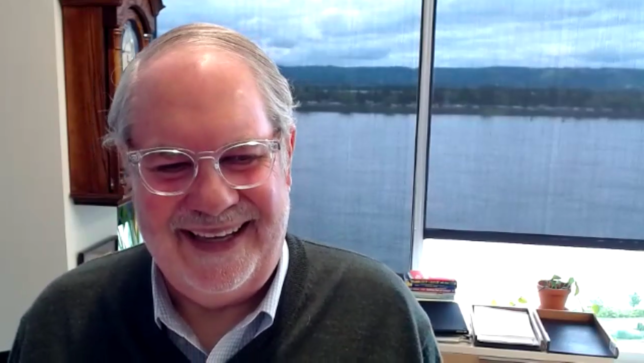 After 16 years as chief executive officer and executive director of the M.J. Murdock Charitable Trust in Vancouver, Wash., Steve Moore is retiring at the end of next month, when Romanita Hairston will succeed him in the role.

During Moore’s tenure at its helm, the Trust—one of the largest philanthropies in the Pacific Northwest—has continued to take a long-term worldview that takes ideas seriously, while placing strong grantmaking-program emphases on the importance of place and in the development of nonprofit leadership. The Trust is a steady and solid presence in American philanthropy.

Moore himself is a welcoming and comfortable conversationalist whose kindness seems as natural and expansive as the mountains behind him. He was nice enough to join me for a conversation last week. The almost 16-minute video below is the first of two parts of our discussion; the second is here.

In the first part, we talk about the foundation’s namesake, Jack Murdock, and his fellow Tektronix founder Howard Vollum; the opportunities and challenges of planning for a philanthropy to exist in perpetuity, and the consequences of ideas, both good and bad.

“One of the many things that I think was very thoughtful of Jack Murdock is that he gave the trustees the opportunity to spend out if they decided to at any point in the history” of the Trust, Moore tells me. Murdock “also gave the opportunity to go in perpetuity. … Right now, our planning is based upon in perpetuity. So we are trying to plan with a long view in mind and not just ‘What can we do now?,’ but ‘What can we do in 30 years?’”

At the Trust, created in 1975, we “are always asking ourselves, ‘Are we being Murdock-ish? Are we doing things, in a sense, in the spirit of Jack Murdock?’” according to Moore.

One of the great things [Murdock] said is, “I don’t know what the world would be like in 40 years. Now, I’ve got to count on the trustees and the staff that are working 40 years from now to do the kind of things that we should be doing at that time, and to reflect the kind of ways that we would work that are consistent with who we are now.”

Reflection on his time in the academy before joining the Trust, Moore said, “I loved and still love higher education. I feel like it’s a very formative time in people’s lives and that ideas matter. I think that’s a really important thing. Bad ideas have bad consequences. Good ideas have good consequences.” And the same is true in philanthropy, he later added.

In the conversation’s second part, Moore talks about what’s changed in the nonprofit sector overall and its philanthropic component in particular since he began at the Trust, seeking short- and long-term results in grantmaking, the use of metrics to gauge its success, and what the future holds for nonprofitdom, the Murdock Trust, and him.

This article originally appeared in the Giving Review on May 26, 2022.