The American Enterprise Institute senior fellow talks to Michael E. Hartmann about his career, the Civil Society Awards program, whether civil society is a “luxury good,” and philanthropy and donor-advised funds.

A senior fellow in domestic policy at the American Enterprise Institute (AEI), Howard Husock’s research and writing focuses on municipal government, urban housing policy, civil society, and philanthropy. Before joining AEI, Husock was a senior executive fellow at the Philanthropy Roundtable, prior to which he was vice president for research and publications at the Manhattan Institute, to which he came from begin director of case studies in public policy and management at the Harvard Kennedy School.

His most-recent book is The Poor Side of Town: And Why We Need It. His other, previous books include Philanthropy Under Fire and Who Killed Civil Society?: The Rise of Big Government and Bourgeois Norms (reviewed here) 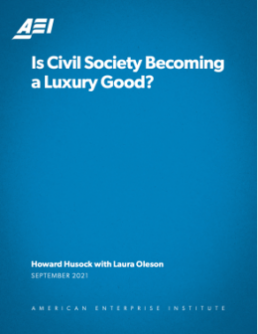 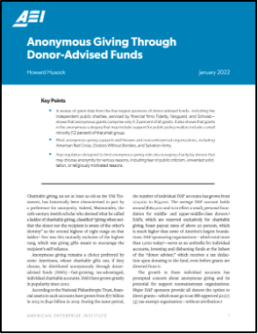 Using census data, Is Civil Society Becoming a Luxury Good? examines whether participation in private, voluntary groups comprising civil society in America might be tied to income. “In three of four states examined—California, New York, and Texas—high-income census blocks, or census blocks in which there is a significant presence of high-income households, have more civil-society-type organizations,” according to Husock and Oleson.

In Anonymous Giving Through Donor-Advised Funds, Husock reviews grant data from the five largest sponsors of donor-advised funds (DAFs)—including the public charities connected to the Fidelity, Vanguard, and Schwab financial-services firms. Anonymous grants comprise only 4.3% of these five sponsors’ funds, his study finds. “It also shows that grants in the anonymous category that may include support for public policy matters include a small minority (12 percent) of that small group.

Husock was kind enough to join me for a conversation last week. The just more than 11-minute video below is the first of two parts of our discussion; the second is here. In the first part, we talk about his career, the Civil Society Awards Program, and the AEI reports on whether civil society is a “luxury good” and DAFs.

“The paucity of civil-society organizations in lower-income communities is a real concern,” Husock tells me.

As for philanthropy in general, “My interest lies more in what the millions of small donors are doing, and I don’t want them to be discouraged from finding, and supporting, and volunteering in their own local organizations,” he says.

Look, I’m an active, conservative person, writing on conservative themes, and so I’m glad that the major conservative foundations exist, and I hope that they can influence the universities and all of that. But I think that’s distinct from Americans of all walks being involved in their own communities in ways outside the government, and I view that as an end in itself that we need to celebrate and protect.

In the conversation’s second part, Husock talks more about civil society and philanthropy, DAFs and anonymous giving through them in particular, and the large, mostly progressive foundations’ influence and self-perpetuating non-accountability.

This article originally appeared in the Giving Review on February 9, 2022.