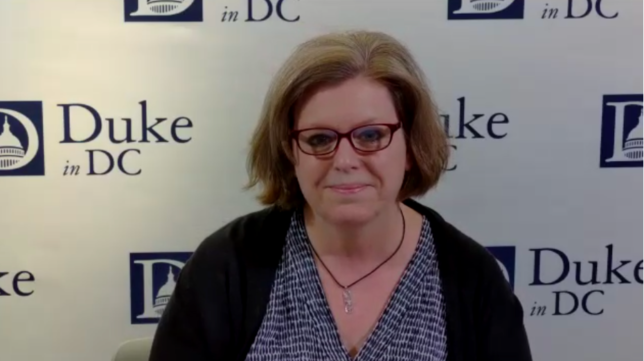 Kristin Goss is a professor of public policy and political science at Duke University‘s Sanford School of Public Policy. She directs both the university’s Duke in DC program and the Sanford School’s Center for the Study of Philanthropy and Voluntarism.

Goss’ recent scholarship has focused on the role of the mega-wealthy in public-policy debates and policymaking, including through their philanthropy; the evolution of gun-related advocacy during the past decade, about which she has authored, co-authored, or co-edited three books; and gender and politics, including the pivotal role that American women’s groups have played in policy advocacy throughout history.

On philanthropy in particular, among other things, Goss has written “Policy Plutocrats: How America’s Wealthy Seek to Influence Government” in the American Political Science Association’s PS: Political Science & Politics in 2016, and “Donors for democracy? Philanthropy and the challenges facing America in the twenty-first century” with Jeffrey M. Barry in Interest Groups & Advocacy in 2018. She is currently working on a book about philanthropy and democracy.

Before joining Duke, Goss taught American politics at Georgetown University, was a consultant to the Corporation for National & Community Service, and was a Chronicle of Philanthropy reporter.

Goss was kind enough to join me for a conversation last week. The almost 23-minute video below is the second of two parts of our discussion. In the first part, which is here, we talk about her career, and the level and nature of academic study and journalistic coverage of policy-oriented philanthropy.

In the second part, we discuss how policy plutocrats actually go about trying to get their way, the effects of this plutocracy, critiques of it from both progressives and populist conservatives, and whether there could be some overlap in those critiques as philanthropy reforms might be proposed and considered in the future.

How do policy plutocrats go about trying to get their way? “Well, they’re doing it the same way as the rest of us,” Goss tells me. “They just have more resources and more access and more leverage. They are lobbying, within the extent of the law, they’re giving money. Obviously, they’re making phone calls. They’re seeding new organizations or sustaining existing organizations.”

Is this bad? “Within the small, number of us who are studying philanthropy on the academic side, I think the answer,” she says, “is kind of a range from it’s mostly bad to truly awful. I don’t think there’s a lot of sympathy for big philanthropy. … I’m not talking about giving a hundred million dollars for scholarships or something like that, but” regarding “the more political or policy-oriented” giving. “I think there’s a consensus that this is really not healthy.”

“I’m one of those people who thinks that we’ve got way too much inequality in society and that income inequality translates increasingly to political inequality, and big philanthropy is implicated in this,” according to Goss. “To me, it’s not a very controversial critique. I think the question is, well, what’s the alternative?”

Goss acknowledges others’ critiques of establishment philanthropy and its effects. “If you took a look at the top 25 funders of public policy—again there, broadly construed—I think you can easily say that the majority of those funders are what I would call either kind of centrist, pragmatic funders or center-left or progressive,” she says. “There are a handful of conservative, but I think that’s right, I think big philanthropy tilts left.

“[T]his could be one of those rare moments in politics where we do have strange bedfellows,” she later notes.

On the left, there’s a concern that efforts to become a more-inclusive, egalitarian, multiracial democracy—that those efforts have stalled, and in fact that we may be experiencing a backlash. I think that on the right, you have a kind of a similar concern, and that’s that the liberals, progressives, have kind of colonized all the big institutions of society …. Philanthropy is already starting to get caught up in that debate.

Goss floats the idea of foundations voluntarily creating “a norm that every grant or grant program would go through something that I’m going to call a ‘civic impact review,’” as she describes it. Likening the idea to existing environmental impact statements, she asks, “What if we think about every grant and what impact it’s going to have on core features of a healthy democracy?”

This article originally appeared in the Giving Review on March 30, 2022.