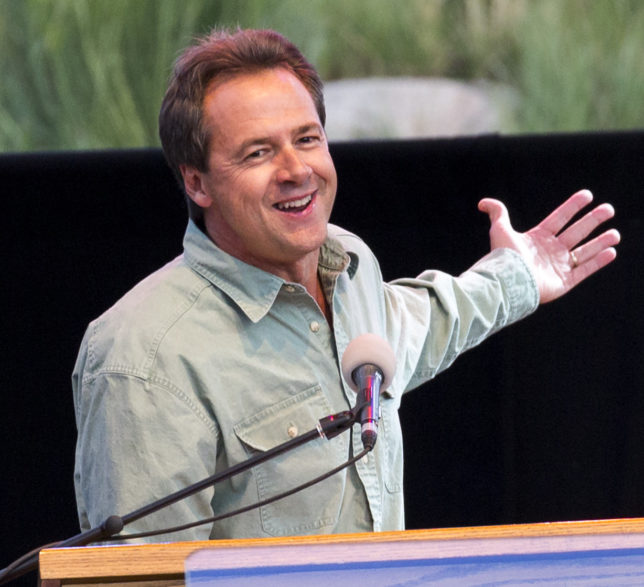 Last week, Montana Governor Steve Bullock declared himself a candidate for president. Despite having little name recognition outside his home state, the Governor is hoping to make a splash in a crowded field of Democratic hopefuls. (As of this writing there are over two dozen choices.)

What makes Bullock think he can stand out?

As governor of a red state, Bullock has potential crossover appeal that his fellow Democrats don’t have. In fact, he won reelection while Montana was also voting for President Trump in 2016. But his bipartisan bona fides are diminished by Bullock’s other claim to fame: trying to overturn Citizens United v. FEC.

As Montana’s Attorney General, Bullock defended the state’s 100-year-old law prohibiting corporations from making independent expenditures or campaign contributions to politicians. Despite being rebuffed at the Supreme Court, which issued a brief decision citing Citizens United, Bullock claimed that “History will show that it was Montanans and the Montana Supreme Court that understood the heart of this issue [campaign finance] and stood on the side of ‘We the People.’”

Last year, Governor Bullock appeared in the PBS documentary “Dark Money,” which partly followed Bullock’s attempt to overturn Citizens United. The problem? The film itself was funded with sparsely documented nonprofit money, as CRC revealed in the Wall Street Journal.

Bullock didn’t stop his “dark money” crusade. Despite losing his case before the Supreme Court, Bullock won his 2012 race for governor, which gave him the power to attack free speech as Montana’s executive.

It started in 2014, when Bullock signed into law Montana Senate Bill 289, which required “dark money” groups to disclose how they spend money in state elections. Upon signing the bill, Gov. Bullock said:

Montana is now back to having legitimate elections instead of the auctions we—for a brief time—held every two years . . .  And we are on our way back to having elected officials that are finally accountable to the citizens they represent instead of some special interest and their bundles of dark money.

Beginning in the next election for state races, Montanans will be able to accurately judge and understand the political attacks that have become so common in our elections, and they’ll have the opportunity to see who is funding the attacks.

In 2018, Bullock issued an executive order requiring state government contractors to disclose the previous two years’ political contributions and donations to “dark money” groups when submitting bids for contracts over $25,000 for services and $50,000 for goods. This accounts for roughly 500-600 contracts a year in the state.

Besides undermining Citizens United, Governor Bullock’s campaign finance maneuvers as governor reveal a one-sided concern about money in politics aimed at corporations and social welfare groups. At no point has Bullock raised the issue of labor unions using their deep pockets to influence politics. In fact, after the Supreme Court issued its decision in Janus v. AFSCME, the Montana governor took to Twitter to issue his own dissent in the case.

The Janus decision freed government workers to choose whether to join a union and to decide if they wanted to financially contribute to that union. Arguably, the Supreme Court’s decision got money out of politics.

According to the National Institute on Money in State Politics (based in Montana!), some of Governor Bullock’s top donors over the years include the International Brotherhood of Electrical Workers, the Treasure State Pac (affiliated with Democratic Sen. Jon Tester), the Montana Education Association-Montana Federation of Teachers, the United Food & Commercial Workers International Union, the American Federation of Teachers, and the National Education Association.

When he was Montana’s Attorney General and running for governor in 2012, the Democratic Governors Association paid over $2.8 million to Montana Jet Pac, which in turn paid for television advertisements in favor of Steve Bullock for Governor. The PAC also ran attack ads against Bullock’s Republican rival, Rick Hill.

The Democratic Governors Association has made similar moves in other state elections by setting up seemingly regional PACs and funding them from the national organization.

Now that he’s making “dark money” his 2020 calling card, Bullock seems unprepared to leave the political and financial influencing behind. Already, a prominent Floridian fundraiser plans to back Bullock’s campaign.