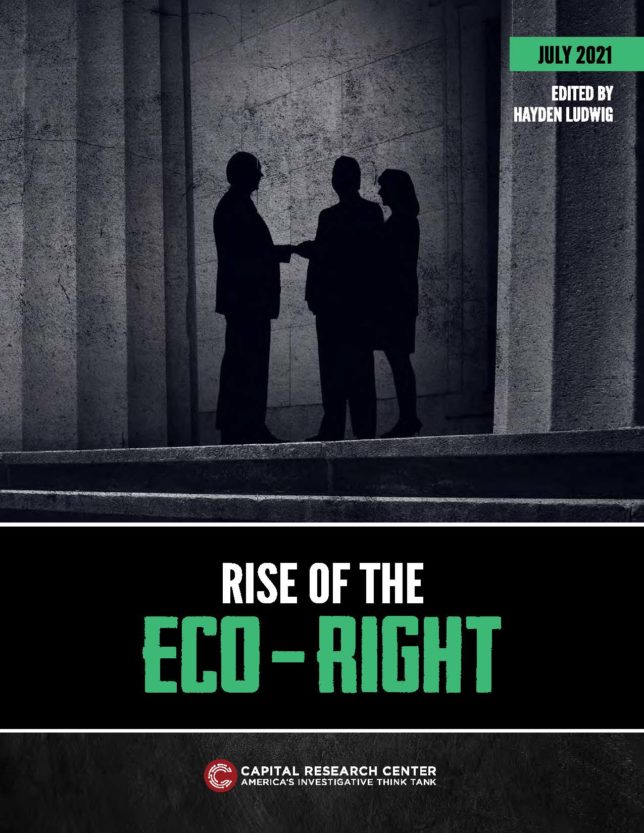 If old sayings are anything to go by, then a conservative is as a conservative does. One hopes that that is particularly true of political groups responsible for shaping public policy—but what about groups that are funded by liberal donors to push their left-wing agenda?

This is the plight of the “eco-Right,” our name for the few dozen lobbying, litigation, and activist nonprofits that identify themselves as free market or broadly right-of-center and yet are attempting to rebrand environmentalism and global warming ideology as conservative values. In the process, they are threatening to undermine both affordable energy in America and the future of the conservative movement.

The Capital Research Center broke the news on the liberal mega-donors secretly bankrolling leading members of the eco-Right as well as the carbon taxes and other burdensome regulations they propose. In this report, we’ve compiled years of research and reporting to reveal the funders, leadership, and lobbying of the eco-Right, exposing a web of overlapping boards and shared donors—all in service to a destructive and misleading agenda.

Our aim is to equip the reader with the basic tools to understand these groups and their goals so that no one is fooled into believing that consensus-driven science and alarmism are conservative values, however they’re presented.

We are not the “gatekeepers of conservativism.” Individuals are always free to identify themselves with whatever set of beliefs they wish. But as leading experts on the professional environmental movement, we’re all too familiar with the Left’s practiced use of deception and misdirection to camouflage its agenda to the casual glance. We understand that environmentalism—not conservationism—is and always will be a creature of the Left, a political cudgel for reshaping America in its own image and aborting freedom wherever it is found. Since 1984 we have been “following the money” from wealthy special interests to wherever it leads, liberal or otherwise. Few organizations have a deeper understanding of how thoroughly funders such as the Energy Foundation or the William and Flora Hewlett Foundation have saturated activist groups with multi-million-dollar grants, whether they call themselves “progressive,” conservative, or moderate.

Finally, although we are skeptical of human-induced catastrophic climate change, our focus is on the eco-Right’s funders and policies, not its motives. We provide basic arguments against carbon taxes to help readers better understand the battlefield. This report leaves persuading individuals of the issue of global warming to others.