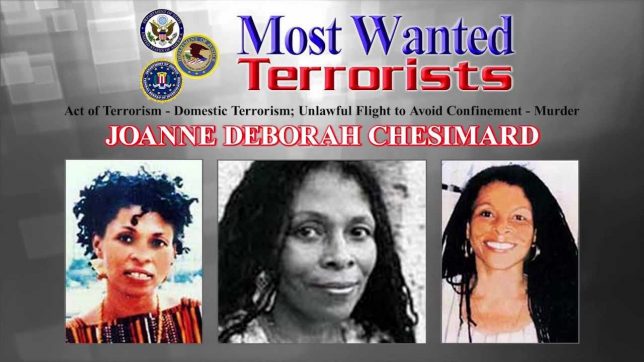 Image via Federal Bureau of Investigation, goo.gl/x3TGdm
by Jacob Grandstaff

The July 16 tweet celebrates Chesimard as a “revolutionary,” despite the exiled terrorist’s status on the FBI’s Most Wanted List. This is ironic, considering the group’s recent vitriol against the NRA, which it has accused of promoting gun violence. 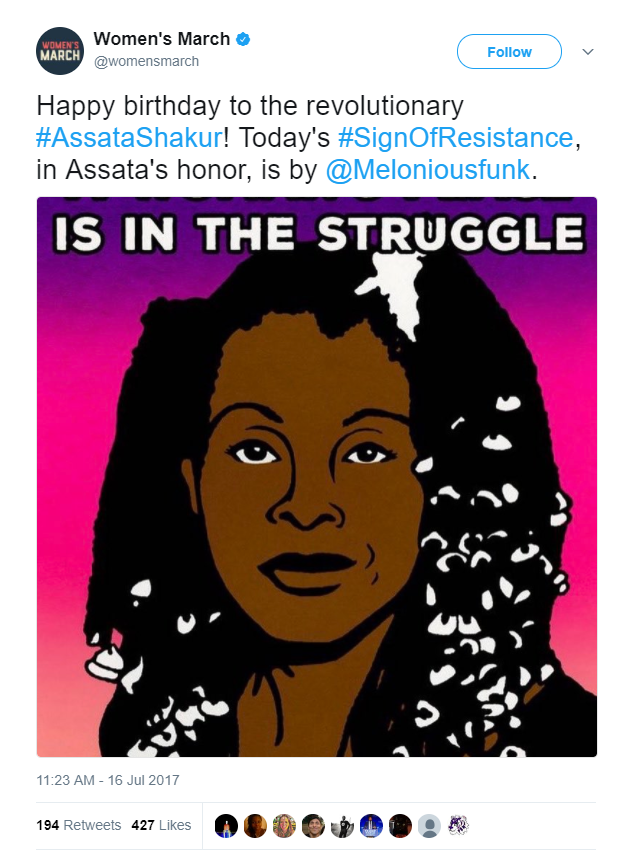 The Women’s March characterizes itself as a feminist movement organized in opposition to President Donald Trump and his supposedly anti-women comments and political stances. The anti-NRA demonstration, however, appears to have little to do with women; and instead meshes more with the greater Left’s accusations of racism against the NRA.

Black Lives Matter Los Angeles released a copycat video of the advertisement, demanding the NRA remove its “dangerous propaganda videos.” The clip opens with the statement, “they use their guns to assassinate black people”—subtly suggesting that defenders of the Second Amendment cling to their right to bear arms so they can terrorize black Americans.

In an interview on FOX News, Dana Loesch characterized the Women’s March demonstrations as “only some women’s march,” emphasizing the group’s penchant for excluding pro-life and pro-gun rights women.

Loesch then responded to the Black Lives Matter video, saying she believes Black Lives Matter “began as an organization that really…wanted to solve some of the discord between the black community and police officers,” and called these goals “a noble thing.” Since billionaire George Soros began funding them, she added, the group “has turned to fostering more division instead of solving it.”

Women’s March’s noisy 18-mile hike from the NRA headquarters in Fairfax, Virginia to the Department of Justice (DOJ)—and subsequent demonstrations the following day—show that the group is primarily concerned with Left-wing coalition-building and not women’s issues. According to affiliates of the National Journalism Center who covered the event, several speakers at the protest outside the DOJ told supporters that it takes smaller groups like Women’s March to carry out a broader movement.

The march prompted a counter protest in Washington D.C. by NRA supporters who pushed back against the charges of racism. One individual, wearing an NRA cap, said that the Women’s March promotes “a totally false narrative that the NRA is exclusive to only one type of race, or one type of person, and it’s total nonsense. The NRA doesn’t exclude anybody.”

Some Women’s March protesters accused the NRA of inciting violence through the advertisement. It would be interesting to hear their opinion of the group’s Sunday tweet praising the revolutionary terrorist Chesimard, who was actually convicted of acts of violence.

Chesimard, a member of the Black Liberation Army who with her fellow domestic terrorists routinely robbed banks to fundraise for their cause, partook in the assassination-style shooting of a New Jersey police officer in 1973. In 1977, she was sentenced to life in prison – only to escape two years later. She hid out underground before receiving asylum from Fidel Castro’s government in Cuba, where she is believed to still be in hiding. The FBI has offered a million dollar reward for information leading to her capture.

After a firestorm of criticism erupted following the happy birthday tweet, Women’s March issued a statement defending its praise of Chesimard. On July 18 the organization said Chesimard “took a militant approach. We do not. That does not mean we don’t respect and appreciate her anti-racism work.”

According to Women’s March, they honored the unrepentant terrorist because she allegedly stood up to sexism within the Black Liberation Army.