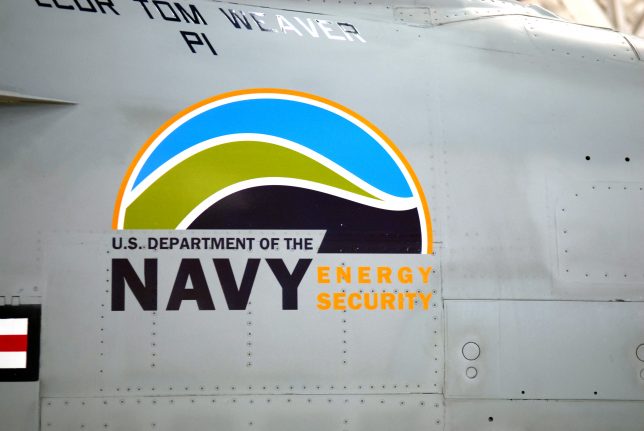 100330-N-9565D-020 ANDREWS AFB, Md. (March 29, 2010) An F/A-18 Super Hornet from Air Test and Evaluation Squadron (VX) 23 with green markings and the U.S. Department of the Navy Energy Security logo is in the hangar at Andrews Air Force Base. VX-23 will be testing the full envelope of the Super Hornet with a drop in replacement biofuel made from the camelina plant in an effort to certify alternative fuels for naval aviation use. (U.S. Navy photo by Mass Communication Specialist 2nd Class Clifford L. H. Davis/Released)
by Haelena Bondi-Camacho

Lingering “environmentally-friendly” policies from the Obama administration that sailed under the false colors of “national security” might be on their way out.

The U.S. Navy recently announced that it is canceling a “green” Obama-era fuel-efficiency project for its fleet of destroyers. The project’s aim was to “install fuel-efficient hybrid electric drives in 34 destroyers.” The program has spent approximately $52 million so far, but the Navy “zeroed out funding in 2019” for the project when problems began to arise. A Navy official noted that the hybrid electric drives created an “intense electrical load” on the destroyer and weren’t as fuel efficient as some had hoped.

While using hybrid electric drives and other “sustainable” products in the military isn’t necessarily a bad thing, these projects need to be thoughtfully continued or canceled to ensure that progress is made in the name of national security and efficiency rather than in the name of politics. Dr. Steven Allen from the Capital Research Center (CRC) explained in 2016 that:

Many ideas for saving energy or for obtaining energy from alternative sources may have merit. It may be a good idea, say, to use roll-up solar blankets to power Marines’ GPS devices in Afghanistan, or to coat the hulls of ships with “antifouling” coatings to reduce drag from barnacles. But when the armed forces are required to carry out an agenda based on ideology, rather than science and logistics and the needs of the military, how can we be sure that any given policy is in furtherance of national security rather than politics?

A former Secretary of the Navy under the Obama administration, Ray Mabus, spearheaded an effort to use more sustainable fuel in the military. He called energy reform within the Navy a “strategic imperative,” but this program was a way to subsidize the biofuel industry behind a front of “national security.”

And although the cost of the fuel used in that engine is high right now—it is still cheaper than putting gas into a generator on the battlefield in Afghanistan. And that cost will fall as the scale of production is increased. And if the Navy and Marine Corps are part of the demand, we will help boost that production and cause the price to fall faster.

Propping up the biofuel industry with Department of Defense (DoD) contracts is political in its nature and is financially inefficient. In fact, the Institute for Energy Research reported in 2013 that biofuel purchases since 2009 “have cost an average of $48.36 per gallon, even though the Department of Defense can execute bulk contracts of conventional fuels for about $3.24 per gallon.” The Institute also described a 2012 purchase of biofuels that came at a cost of $4,454 per gallon as the “worst deal for taxpayers on a per gallon basis.”

Politics plays its hand when the military props up an industry by paying excruciatingly high prices for biofuel when, in reality, “in the absence of DoD’s purchases, no [such] market would exist.”

However, this doesn’t seem to be an isolated incident during a past administration—these “green” ideas are haunting our nation’s military. In late 2017, the Pentagon authorized $70 million to both Fulcrum BioEnergy and Red Rock Biofuels for biofuel refinery projects as part of a 2013 biofuel contract that is still being executed. Rep. Mac Thornberry (R-TX), the chairman of the House Armed Services Committee, expressed interest in “get[ting] legal opinions about other options” rather than paying $140 million, and Sen. Jim Inhofe (R-OK) noted his disappointment in the allocation of resources to “Obama-era initiatives that put a social agenda ahead of military readiness.”

Not only does the DoD have a history of bolstering the biofuel industry on a per-gallon basis, but their contracts also have a significant impact on the lasting effect of biofuel. Eric Pryor, the chief financial officer of Fulcrum BioEnergy, noted that the $70 million acquired from the Pentagon was crucial to closing a “$175 million private bond offering in October that was backed by investors such as BP, United Airlines, and Waste Management” that will “springboard” the opening of eight new refineries. It sounds like Fulcrum was the only party that really benefitted from the contract.

The lasting question here is how long will these “green” and Obama-era policies stick around, and when will the military be allowed to shift its focus to enhancing national security rather than propping up an anemic industry in the name of politics?