Why You Should Still Care About Big Labor’s Disproportionate Clout 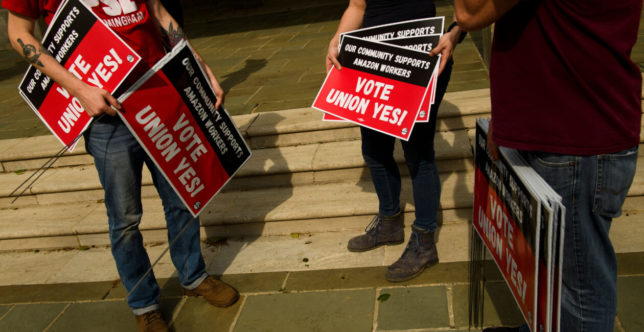 Though its power has declined since the 1950s, when it commanded the loyalty—and commandeered the dues payments—of about one-third of the U.S. workforce, Big Labor remains a potent force in American culture and politics.

Big Labor’s decline was the result of a confluence of factors, including state and federal laws and competitive market forces providing employment benefits unions previously might have helped achieve; unions’ failure to evolve with the economy and to provide things of actual value to employees; and their use of dues for political purposes often contrary to the beliefs of the members paying those dues.

But because so few workers are members of unions today—with only 10.8% of the total workforce and 6.3% of the private sector workforce being union members—it’s easy to overlook the role that labor unions still play in the economy—and especially the role they play in politics.

To the extent that most people who don’t pay close attention to such things are aware of “social justice” unionism, they see it in political campaign contributions.

Labor unions, especially government employee unions, are well-known as a core constituency of the Democratic Party, giving nearly 90% of their institutional political contributions to Democratic candidates—despite the fact that 40% of union families support Republicans.

But those contributions are only the very tip of the iceberg of Big Labor’s political involvement. The Center for Union Facts has investigated the spending on consulting and advocacy organizations made by the primarily private sector labor unions that report their expenditures to the Department of Labor.

It turns out that more than 99% of those expenditures, which amounted to $1.6 billion from 2010 through 2018, go to support left-wing “infrastructure” (i.e., think tanks, advocacy and organizing groups, vendors, etc.). Making matters worse, those contributions come principally from members’ dues funds, rather than special opt-in political funds.

And the politics of Big Labor are unflinchingly “social justice” progressive, across issues and unions.

America’s labor movement is governed by an ideology, known as “social justice unionism,” that guides what was once ostensibly “industrial or economic class organizations with less hours and more wages” into the foot soldiers for—and bankrollers of—an agenda of critical race theory, unrestricted abortion and sexual license, and gun control, among other things.

Much of that has stemmed from union bosses’ quest for power and influence and to remain “relevant.”

Unions also serve as a training and incubation center for left-wing activists who branch out far beyond worker-focused policy.

For example, Cecile Richards might have been the scion of a liberal Austin, Texas, political family, but she was also an alumna of the Service Employees International Union when she took the reins at Planned Parenthood.

Likewise, before Vicki Saporta led the trade group for abortionists, she was the top organizer for the Teamsters union.

The closeness of those ties—more than even the financial support—demonstrates how crucial Big Labor is as an institutional pillar of the organized left.

Democratic politicians want to increase the power Big Labor can bring to bear on the organized left’s behalf through the proposed Protecting the Right to Organize Act.

A little-noticed provision of the legislation that would overhaul American labor law to force more workers to fund labor unions would restore unions’ ability to conduct “secondary boycotts”—strikes and other coercive actions against businesses other than their members’ direct employers.

“Secondary” tactics should be familiar to conservatives on the receiving end of attacks from Media Matters or gun control groups: By targeting Fox News’ advertisers or banks working with firearms retailers, the left finds what one former union organizer-turned-(supposedly objective)-journalist called “soft targets.”

Unions would gain the power to strike if employers did not comply with union demands to boycott suppliers that not only were non-union or in a dispute with the union, but also if the suppliers didn’t comply with union politics on gun control, LGBT interests, or critical race theory-inspired “diversity, equity, and inclusion” policies.

All of this is a warning: While unions may not today be the cultural forces they were in the 1950s, a combination of their reaction to that decline and their institutional friendships still make them a crucial pillar of the broader left.

Liberal politicians will therefore seek to strengthen unions at the expense of workers, including through the PRO Act, legislation that would make union organizing—and thereby compelling the 93% of private sector employees who are not in unions to join—much easier.

That in turn would give them greater power to seize more dues from unwilling workers and to shutter large portions of the economy that do not comply with unions’ economic and cultural progressivism.

This article originally appeared in the Daily Signal on July 6, 2021.