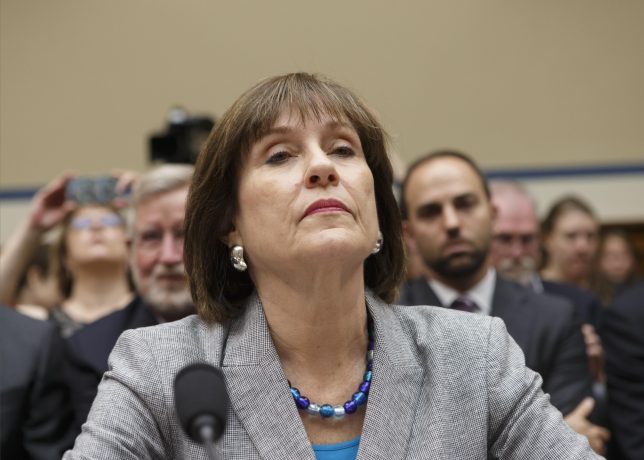 The Department of Justice (DOJ) recently announced that it will not pursue a criminal investigation into Lois Lerner, the former director of the Exempt Organizations Unit of the Internal Revenue Service (IRS), who admitted to targeting and aggressively harassing Tea Party groups. With Treasury Secretary Steve Mnuchin’s affinity for the IRS—and the recent news that he asked to use a military jet to ferry him and his wife on their honeymoon—raises questions about his influence on the DOJ’s decision not to pursue Lerner for her illegal actions.

As CRC contributor Joely Friedman wrote following the Supreme Court’s Citizens United decision in January 2010 (a major defeat in the eyes of many on the Left), the Obama IRS began targeting conservative groups critical of the president’s administration. Lerner later admitted that IRS employees in the agency’s Cincinnati, Ohio, office singled out conservative 501(c)(4) groups which they identified by words such as “tea party,” “patriot,” and “Israel.”

Wetumpka Tea Party Founder Becky Garrison was one targeted conservative who received a letter from Lerner’s IRS stalling her organization’s application for 501(c)(4) tax-exempt status. Garrison told Fox Business News that some groups received letters from the IRS demanding to know the contents of their prayers and what books they were reading. “The IRS even asked for a book report from one of the groups,” she added.

The IRS initially laid the blame on lower-level employees in Cincinnati. But suspicions arose during the congressional investigation that followed, when Lerner’s emails suddenly vanished and her hard drive crashed. Meanwhile, as many as 400 backup electronic devices were destroyed. The few emails that the investigation recovered revealed a deep-seated contempt for conservative groups. Lerner claimed complete innocence before Congress, but then pleaded the Fifth Amendment.

The DOJ and the Treasury’s Inspector General also found mismanagement and ideological bias at the IRS. The Inspector General informed congressional Democrats that the IRS targeted 292 conservative groups and only six center-left groups. Nevertheless, Obama’s DOJ decided not to pursue a criminal investigation, claiming a lack of sufficient evidence of criminal wrongdoing.

With the previous administration’s failure to pursue a criminal investigation, the House Ways and Means Committee hoped the Trump administration would prove different, and in April it asked the DOJ to reopen the case. However, on September 8 Assistant Attorney General Stephen Boyd informed committee Chairman Rep. Kevin Brady (R-Texas) that, based on the available evidence, the DOJ would not be pursuing a criminal investigation.

But given Mnuchin’s peculiar sympathy for the IRS, it’s not inconceivable that affected the decision to let the Lerner investigation go. He complained at his confirmation hearings that the Obama administration cut too much funding to the IRS, calling it “under-resourced to perform its duties.” Mnuchin said that further cuts would hamper the government’s ability to collect revenue and framed increased funding for the IRS as an “investment,” adding: “To the extent that we add resources, we can collect more money.”