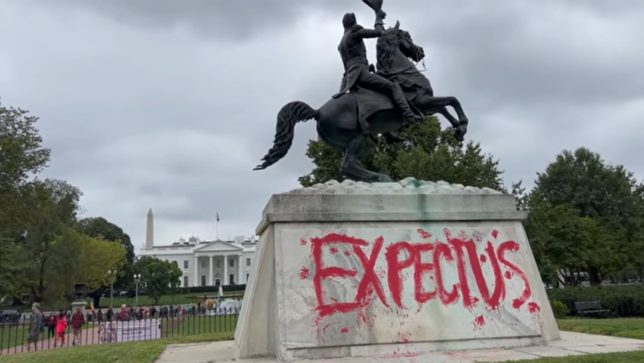 Last week, a network of radical environmentalist activists staged five days of demonstrations around Washington, DC, to pressure the Biden administration to impose more fossil fuel restrictions and shut down pipelines, despite already skyrocketing gas prices and a looming energy crisis this winter.

The demonstrations received relatively little media coverage, possibly because they repeatedly escalated from peaceful to ugly.

Protestors attempted to tear down barricades at the White House, vandalized a statue of Andrew Jackson scrawling “Expect Us” on it in red paint, assaulted police officers while blocking traffic near Capitol Hill, sprayed fake oil on the U.S. Chamber of Commerce building, and attempted to storm the Interior Department. The ensuing brawl at a Interior Department doorway led to more than 50 arrests and multiple officers injured. In total, an estimated 400 protestors were arrested during the week of “climate chaos.”

Professional activist groups known for their dramatic style like Greenpeace were the primary agitators, but the protests were actually organized far in advance by a little-known group called Build Back Fossil Free.

Build Back Fossil Free Isn’t What It Appears to Be

According to its website, Build Back Fossil Free has an extensive list of supporters, including corporations like Patagonia and Ben & Jerry’s. Interestingly, nowhere to be found on the website is the name of the organization’s fiscal sponsor, the Sustainable Markets Foundation.

With roughly $17 million in revenue during 2019, the Sustainable Markets Foundation is a prolific grantor to other climate activists and operates its own in-house activism shop, spending large sums to produce policy reports, transport activists, and launch awareness campaigns. One major project, the Climate Investigations Center, is run by Our Next Economy, a shady for-profit consulting firm that the Sustainable Markets Foundation pays millions each year.

Who Funds Build Back Fossil Free?

The wealthy donors who funded Build Back Fossil Free’s week of “climate chaos” might never be identified. IRS rules do not require donors to disclose whether their grants are for a specific fiscally sponsored project, a fact that left-leaning groups frequently exploit. However, the Sustainable Markets Foundation’s past donors could give some insight into who might be responsible.

In 2019, the Sustainable Markets Foundation’s largest supporter was former Google CEO Eric Schmidt, whose private foundation, the Schmidt Family Foundation, contributed roughly $4.3 million to the group. Schmidt is well known for funding environmental cleanups and conservation efforts and for giving generously to Democratic political campaigns. In 2020, Schmidt contributed millions to the Democratic Party and Democrat-aligned PACs, but now organizations heavily funded by Schmidt are attacking the very administration he helped put in office.

The Sustainable Markets Foundation and thus the Build Back Fossil Free protests are backed by some of the largest and most influential foundations on the left, and their priorities are one of the main determinants of the Left’s entire agenda. Expect climate-change hysteria and protests to ramp up in scale and urgency over the coming year, particularly as the 2022 election cycle looms in the distance.