Wellspring Philanthropic: An Ocean of “Dark Money” on the Left 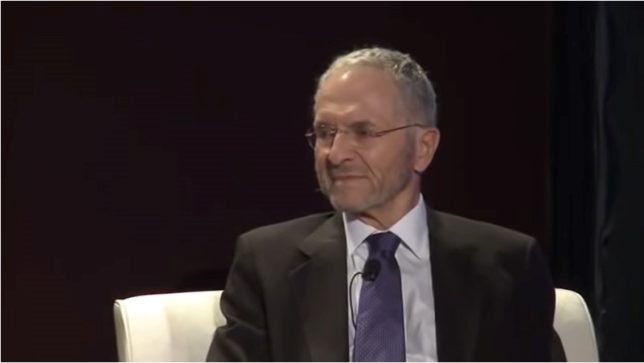 The origins of Wellspring Philanthropic Fund are shrouded. It isn’t so much a foundation as the biggest cog in a well-funded, multi-armed machine whose grants are hidden in “pass-through” groups, and whose donors rarely bubble to the surface.

The story begins in an unlikely place: Princeton-Newport Partners, an early investment management firm in New Jersey that pioneered the first quantitative, computer-driven hedge fund in the world.

Hedge funds are private investment partnerships. In contrast to the high-risk-high-reward choices presented by other investment options, hedge funds are typically meant to generate a consistent return on investment regardless of what the market does—hence their name (“hedging” refers to reducing risk).

Princeton-Newport Partners was founded in 1969 by mathematics genius Edward “Ed” Thorp, best known for developing sophisticated card-counting gambling techniques using probability theory—a skill he put to use in the stock market. (Thorp even wrote a book on counting cards, Beat the Dealer, which mathematically proved that his techniques could overcome a casino’s house advantage in blackjack.)

It was probably while teaching at the University of California, Irvine in the early 1970s that Thorp met the first of Wellspring’s three future founders, David Gelbaum, then a recent graduate with his Bachelor’s degree in mathematics.

After graduating, Gelbaum joined Thorp’s new hedge fund along with two more future Wellspring founders: Andrew Shechtel and C. Frederick Taylor (often called simply “Frederick”). Little is known about Taylor’s early years; Shechtel, however, graduated from Johns Hopkins University with a degree in math and political economy at just 19 before attending Harvard Business School. He later worked on Wall Street and joined Thorp’s hedge fund in Princeton in the 1980s—not long before the company found itself under federal investigation.

Hedge funds are lightly regulated by the U.S. Securities and Exchange Commission (SEC) compared with traditional investment options. Fund managers aren’t even required to register or file public investment records with the SEC, depending on the size of the assets involved. But they’re still closely monitored for fraud.

In 1989, Princeton-Newport Partners collapsed under a Racketeering Influenced and Corrupt Organizations Act (RICO) investigation that saw five of its officers heavily fined or imprisoned for more than 60 counts of tax fraud, mail fraud, and racketeering (extorting or coercing someone to pay for a service).

As the Los Angeles Times reported at the time, Princeton-Newport concocted “an illegal arrangement” with three other Wall Street firms “to engage in sham trades of stocks and bonds so that Princeton-Newport could claim illegal tax writeoffs” for phony losses. A later report adds that the charges were ultimately dropped.

It’s worth noting that Thorp was not among those indicted; he continues to run a hedge fund company in Newport Beach, California. None of Wellspring’s future founders—Taylor, Gelbaum, and Schechtel—were indicted under the RICO investigation, either.

Shortly after Princeton-Newport Partners was liquidated, however, the three founded a “secretive successor” in New Jersey in 1989: TGS Management, apparently an acronym pulled from their names. Little is known about TGS. Its website doesn’t even mention its founders’ names. But a handful of news reports note that the “quantitative finance” firm operates in “small, nondescript office buildings” in California and New Jersey—by some accounts, the very same office space that once housed Princeton-Newport Partners.

It’s also lucrative. TGS reportedly launched with some outside investment, but was so successful in its early years that it returned funds to most of its outside investors and became entirely private.

But in 2014, Bloomberg Businessweek traced hundreds of millions of dollars in donations to medical research to a pool of $9.7 billion held in two trusts—both established on the same day in 2002 by TGS founders Taylor, Gelbaum, and Shechtel.

From 1999 to 2005, the three men reportedly used the law firm Lowenstein Sandler to establish over a dozen “anonymous private foundations funded and controlled by limited liability companies”—all of which have links to Shechtel, Taylor, Gelbaum, or all three. This unique web enabled them to “disguise” their donations and “avoid almost all public scrutiny of their activities,” the website Philanthropy News Digest later wrote.

For reference, assets of $13 billion made the TGS-linked pool the 4th-largest charity in America, bigger than the Ford, Gates, and Getty Foundations. Bloomberg labeled them the “$13 Billion Mystery Angels” for using this unusual arrangement to anonymously funnel huge grants to philanthropic causes nationwide.

The story was picked up by the Algemeiner, a Jewish newspaper, which noted that some of these vehicles have “Hebrew or Israel-related names,” such as the LLC Shekel Funding. It then traced over $100 million in grants from the funding web to Jewish groups. According to the Algemeiner, Gelbaum and Shechtel are Jewish (Taylor’s religion is unclear).

Nevertheless, much remains unknown about the three men. Federal Election Commission records indicate that Taylor is a reliable donor to Democratic Party candidates, giving $55,000 to President Obama’s reelection campaign in 2012. Shechtel, on the other hand, is a frequent donor to Republicans, giving $2,500 to the campaign of Texas Sen. Ted Cruz (R) in the 2018 midterm.

Gelbaum was a major donor to the Sierra Club in the 1990s and early 2000s, gifting more than $100 million to the environmental activist group, according to a 2004 article in the Los Angeles Times. Altogether he reportedly donated $250 million to environmentalist causes, particularly to purchase huge tracts of land in the West which were then given over to the federal government (Gelbaum lives in California). For a time, he and his brother Daniel were also board members for the liberal group Wildlands Conservancy, alongside Sierra Club executive director Carl Pope.

Interestingly, Gelbaum may have played a role in the Sierra Club’s shift towards mass immigration and open border policies in the late 1990s: “I did tell Carl Pope in 1994 or 1995 that if they ever came out anti-immigration,” he told the Times, “they would never get a dollar from me.”

Gelbaum reportedly ceased philanthropic giving in 2013 and retired from TGS Management around 2014. His lawyer told reporters that Gelbaum had suffered financially in the 2008 financial crisis and “lost more than he thought he could possibly lose.”

In the next installment of Wellspring Philanthropic, find about the funding flows from various entities connected to Wellspring.