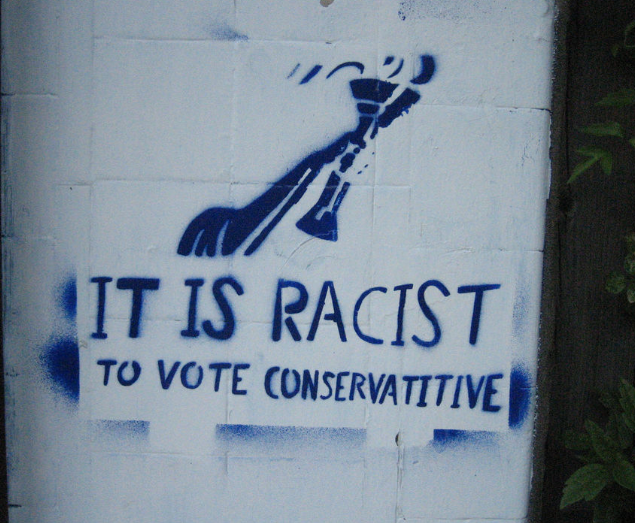 The Federal Bureau of Investigation (FBI) defines a hate crime as a “criminal offense against a person or property motivated in whole or in part by an offender’s bias against a race, religion, disability, sexual orientation, ethnicity, gender, or gender identity.” A hate crime, like any other crime, is against people or property, but with an “enhanced” penalty if the perpetrator’s bias was determined to play a role in the decision to commit the crime.

Conspicuously absent from these protected classes is “political affiliation.” If political affiliation was a protected class, individuals who commit crimes against others for wearing President Trump’s signature “Make America Great Again” hats, for example, would face enhanced penalties, as would many violent members of “Antifa”—an umbrella term encompassing self-proclaimed anarchists and communists who wreak havoc at rallies and on university campuses in the name of “anti-fascism.”

On its website, the FBI confirms that the “highest priority of the FBI’s Civil Rights program” is dealing with hate crimes. Troublingly, the FBI claims to have “forged partnerships” with many far-left organizations including the discredited and heavily partisan Southern Poverty Law Center (SPLC). One example should suffice to illustrate the organization’s political leanings: the SPLC coined the phrase “The Trump Effect” to describe how President Trump’s election has allegedly contributed to a rise in bullying in elementary schools, as well as a host of other social ills based on “a miniscule sampling and an unscientific method of collecting data.”

Other far-left organizations listed as partners in the FBI’s quest to tackle hate crimes are the American-Arab Anti-Discrimination Committee, the Anti-Defamation League (ADL), the Human Rights Campaign (HRC), the National Association for the Advancement of Colored People (NAACP), the National Center for Transgender Equity, the National LGBTQ Task Force, and the National Organization for Women (NOW).

By working with organizations such as the SPLC, the FBI brings into question its own neutrality. Further, numerous inconsistencies in application and repeated unfair political exploitation of “hate crime” laws also warrant examination.

“Ronald Reagan set the tone and created the environment in which acts of racial violence thrived . . . . Thus, the widespread physical attacks on blacks and other minorities went unchecked.”  —Former long-term chairman of the Department of Sociology at Hunter College, Dr. Alphonso Pinkney, in his book Lest We Forget: White Hate Crimes (1994).

In 1981, the Anti-Defamation League (ADL) “drafted a model hate-crime statute which recognized racial, religious and ethnic biases.” A Wisconsin statute based on the ADL template was challenged all the way up to the Supreme Court in Wisconsin v. Mitchell in 1993. In the case, several black American men and teens attacked a young white man after they watched the film Mississippi Burning, which was based on the 1964 Ku Klux Klan murders of three young activists who were registering black Americans to vote in Mississippi. The Supreme Court held that “enhanced penalties” did not violate the defendant’s Constitutional rights, further cementing the continued acceptance of the “hate crime” designation in America.

In the 1990s, the concept of “hate crime” gained prominence in the American psyche, promoted in large part by advocacy organizations such as the ADL, the National Gay and Lesbian Task Force (now known as the National LGBTQ Task Force), and the SPLC. The SPLC’s “Klanwatch Project” (later renamed the “Intelligence Project”), in particular, drew significant attention. Like today, partisan activists often charged that hate crime was at “epidemic” levels without evidence. Eventually, most states enacted hate crime legislation.

In November 2016, the SPLC declared that their organization had “collected 437 reports of hateful intimidation and harassment” in the week following President Trump’s election. The only explanation of the report’s methodology was that data was “collected through news reports, social media, and direct submissions via SPLC’s #ReportHate page” and was “largely anecdotal,” clearly leaving the door open for fraudulent submissions. While the SPLC did not provide source data, they did describe examples of “hateful intimidation and harassment.” One example was reported to the SPLC from Texas by a “Latina” woman who said:

I was walking my baby at my neighborhood park and a truck drove by with a male driving and a female passenger. The female yelled “white power” at us as they drove by and then sped away.

No further details about the incident were given, so it is unclear whether the event would rise to the level of a crime and whether it was representative of the other occurrences reported.

But it’s important to pay attention to the language the SPLC used; the new designation of “hate incident” is quite convenient, as anyone can enter a “hate incident” into a database. “Hate incidents” carry a much lower burden of proof than true hate crimes, which are logged by law enforcement. This rhetorical strategy allows the Left to expand its trove of “evidence.” It would be virtually impossible for a researcher to determine whether those “hate incidents” occurred or to replicate such data.

A follow-up report from the SPLC was ominously titled “Incidents of Hateful Harassment Since Election Day Now Number 701.” Like the previous report, the SPLC explained that “many [incidents] included in the count remain anecdotal.” However, it promised to provide “deeper analysis and more documentation of these incidents” at a later date. As it stands, it is still impossible to review the source data. Despite this “largely anecdotal” methodology, the SPLC reports have been cited by the New York Times, CNN, and many other mainstream media outlets.

Ultimately, the SPLC teamed up with ProPublica, which is one of many activist organizations collecting data on hate crimes. Despite its lack of scientific data, the SPLC assured readers that the group is “committed to maintaining a full scope and accurate survey of hate incidents across the United States [and] will continue to collect and capture reports and publish on a monthly basis at Hatewatch…” which is the SPLC’s “blog that monitors and exposes the activities of the American radical right.”

According to ProPublica, there is a need to document “lower-level incidents of harassment and intimidation, such as online or real-life bullying.” Therefore, ProPublica “marshaled a national coalition of news organizations intent on reporting the nature and scope of hate crimes and bias incidents in the United States.” Its “civil rights” partners include the Human Rights Campaign (HRC), the SPLC, the ADL, the Matthew Shepard Foundation, and the Council on American-Islamic Relations (CAIR).

This past year, the SPLC has doubled down on their unproven claims about hate on the rise in America and President Trump’s role in that hatred. An email address gathering tool on the SPLC website says it very clearly:

At this point, it’s not enough for Trump simply to condemn bigotry. He must take responsibility for the surge in white supremacy and hate that he has unleashed…

The ADL has published a similar report strongly implying that an alleged uptick in anti-Semitic incidents was related to President Trump’s election. ADL head Jonathan Greenblatt reported to the LA Times, in April 2017, that “increases [in anti-Semitic incidents] were due to the presidential election and a rise in activity among white supremacists.”

But these established, albeit partisan, organizations are far from the only ones gathering “hate” data. Organizations such as the National Coalition of Anti-Violence Programs (NCAVP), which focuses on “LGBTQ communities,” publishes reports on LGBTQ homicides based on data gathered from partner organizations across America. A report published in January 2018, lists “lesbian, gay, bisexual, transgender and queer” homicides, but does not prove that those homicides are related to their sexual identity. There are several reasons why this report is problematic, and why the reporting on the report is inaccurate and wholly misleading.

The title of their report, “A Crisis of Hate: A Report on Lesbian, Gay, Bisexual, Transgender and Queer Hate Violence Homicides in 2017,” leads readers to believe that the homicides were motivated by bias against LGBTQ groups. A cursory look at the source data indicates that most of the reported homicides took place based not due to anti-LGBTQ bias, but due to other tragic circumstances. In fact, Chad Felix Greene of The Federalist reviewed the cases individually and found that out of 52 highlighted cases, only four could be reasonably attributed to a bias motivation based on available facts of the crimes.

Yet the report uses misleading language throughout. For example, the introduction of the report claims:

We are releasing this report during a time when our communities are witnessing the few civil rights protections and policies being rolled back and discrimination being instituted into law; when media organizations and organizations working with survivors are receiving an unprecedented number of stories of hate-fueled attacks. While much of this violence is not new, but rather amplified, this past year has sparked a national conversation about the escalation of hate violence against so many marginalized communities. NCAVP hopes that sharing this information now will encourage people to reject anti-LGBTQ bias whenever it occurs, and to resist any hateful rhetoric or policies put forward by this administration or by legislators.

Making unsourced claims that “civil rights protections and policies [are] being rolled back and discrimination [is] being instituted into law,” and adding that there is an “escalation of hate violence against so many marginalized communities” is irresponsible and simply not substantiated by the evidence provided in the NCAVP report. The report correctly names 52 individuals who were killed in 2017, but it refers to the murders as “hate violence related homicides of LGBTQ people,” which again leads the reader to believe that the murderers were motivated by anti-LGBTQ bias.

NCAVP Executive Director Beverly Tillery practically blamed President Trump for the homicides cited in the report during an interview with the Huffington Post: “Trump won the election by saying it was time to take back America for people feeling pushed out by LGBTQ people, immigrants, and people of color,” she said. The headline of the article, “Report Shows Massive Increase in Anti-LGBTQ Violence Since Trump Took Office: It’s incredibly scary to be LGBTQ in Trump’s America,” is another clear indicator that the NCAVP’s “research” can be used as a political weapon.

In the next installment of Weaponizing Hate, learn about the interconnected agenda to raise the profile of “hate incidents” to influence the national discourse.