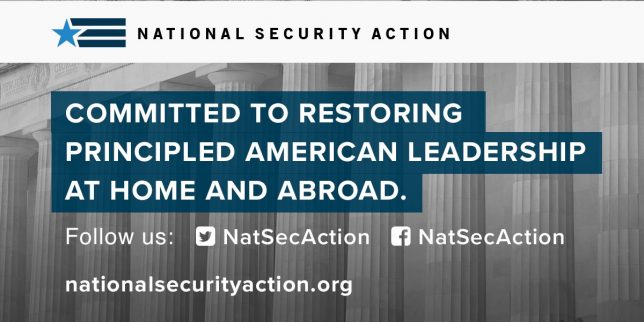 By now it’s a trite observation that Donald Trump’s improbable win in 2016 took the Obama administration officials in the Big Government “swamp” by surprise. Since then, many on the Left have been caught up in one form of “resistance” or another—none more so than the Obama’s team of supposed national security “experts,” who have devised a new way to join the so-called Resistance… and still collect a paycheck.

Ostensibly, NSA is a lineup of left-leaning national security operatives meant to provide liberal candidates for public office with “talking points” and “legal and policy expertise” in order to “defend the discredited foreign policy consensus” against President Trump, according to Rhodes.

But NSA is a 501(c)(4) advocacy group, meaning National Security Action can both lobby and engage in political activity. It’s worth noting, too, that the group was incorporated in 2017, though it didn’t debut in public until February—well after the Hillary Clinton campaign failed to capture the White House. And, notably, NSA plans on shutting down within the next three years, according to Rhodes. “We’re a temporary organization,” he said.

This three-year sunset, plus the group’s quiet emergence after the 2016 election and well-placed leadership—Sullivan was widely believed to be President Hillary Clinton’s pick for national security advisor—reveals what Rhodes and Sullivan only begin to let slip: NSA is an anti-Trump coordination group meant to tide over elites in the liberal foreign policy establishment until Democrats can regain the presidency in 2020.

The list of NSA’s 60 Advisory Council members bear all the hallmarks of the professional Left: well-educated, immaculately “résuméd,” and tightly connected with liberal elites in Washington, D.C.

Take billionaire Penny Pritzker and Elizabeth Sherwood-Randall—Obama’s billionaire Secretary of Commerce and his Special Assistant for European Affairs, respectively. Besides serving in the last administration together, the two were also college roommates during their undergraduate years at Harvard. Sherwood-Randall later married Tom Nides, who served as an Obama administration deputy secretary of state. And as if political connections weren’t enough, Sherwood-Randall’s well-connected to the mainstream media—her brother is Ben Sherwood, president of Disney-ABC Television Group and the former president of ABC News. From there, the connections only get further entangled.

In fact, between National Security Action’s staff and Advisory Council you’d be hard-pressed to find a member who isn’t an Obama alum.

The Penn Biden Center for Diplomacy and Global Engagement has five representatives, all of whom served as senior staffers to Barack Obama or Joe Biden (including National Security Agency executive director Jeff Prescott, who’s a senior fellow at the Penn Biden Center).

Mike Breen, CEO of the Truman National Security Project, a liberal foreign policy think tank, is an NSA member. Then there’s the left-leaning Center for Strategic and International Studies, whose senior vice president Kathleen Hicks and senior advisor Wally Adeyemo are both on the Advisory Council.

And finally—confirming the NSA’s professional Left credentials—Ben Wikler, Washington director at the union-funded activist group MoveOn.org, was listed as a Council member (Wikler’s since been removed from NSA’s website, but the website Way Back Machine shows him on the Advisory Council as of February).

In fact, of National Security Action’s 72 Advisory Council members and staffers listed in June 2018, 59 served in the Obama administration. The rest are retired Democratic Party politicians, former Hillary for America campaign staffers, and liberal members of the foreign policy establishment.

But one Advisory Council member stands out in particular: Joe Cirincione, president of the Ploughshares Fund. Ploughshares is a kind of trade association for liberal foreign policy-minded donors known for advocating for U.S. nuclear disarmament during the Cold War. But Ploughshares is perhaps best known for its critical role in manufacturing favorable media coverage of the Obama administration’s 2015 Iran nuclear arms deal, which the group bragged about in its 2016 annual report: “Ploughshares Fund ran a five-year, $12 million campaign to forge a diplomatic solution to the Iran nuclear crisis.”

To be fair, National Security Action doesn’t pretend at bipartisanship.  It boldly claims President Trump “bows to the whims of Moscow while undermining legitimate investigations into his own hidden financial interests,” and everywhere touts the tired Democratic Party line that “climate change is an urgent national security challenge” and “more people now respect China’s leadership than ours.” It’s so old hat that even the Nation, a left-leaning magazine, wrote that “the ideas that NSA presents are all too reminiscent of what the Clinton campaign had on offer.”

“In the end,” the magazine warned, “the NSA’s message will only narrow the already narrow parameters of debate within the Democratic Party.”

But perhaps National Security Action’s greatest contribution won’t come from helping Democrats in future elections or tightening networks inside the Beltway, but by opening a window on the quiet world of Washington’s Deep State—where elected presidents come and go, but the schemes of left-wing operatives endure.

The Censorship Doctrine and the Rise of Rush Limbaugh