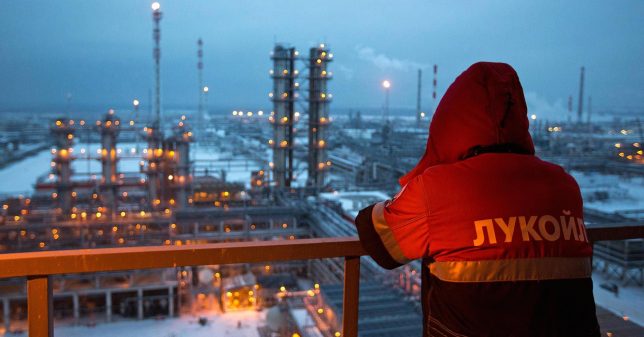 Image via Oil and Gas People, goo.gl/V2c1Yz
by Jacob Grandstaff

Russian connections to anti-fracking activism in the United States underscore Russian President Vladimir Putin’s dedication to keeping Eastern Europe dependent on the oil and natural gas which flows from its state-owned energy giant, Gazprom. Russia has successfully stopped fracking efforts in Eastern Europe through phony environmentalist and media campaigns, and is now attempting to disrupt the surge in American natural gas production that is quickly bringing the U.S. into energy independence, and creating threatening unwanted competition for the Russian energy in Europe.

Exports from the U.S. via the oil and natural gas extraction process known as hydraulic fracturing – or “fracking” – poses a clear danger not only to Gazprom, but to the Russian government. One quarter of the regime’s revenues come from taxes paid by the energy giant, in which the government is a majority stakeholder. It is not surprising, then, that Gazprom is the only major energy company in the world to oppose the development of shale gas. For years its executives have claimed that fracking poses severe environmental risks; Alexander Medvedev, Gazprom’s executive chairman and head of Gazprom Export, has vowed that the Russian state and Gazprom are ready “to wage [ ] war on shale.”

While many former Soviet bloc countries in Eastern Europe have joined NATO and the European Union in an attempt to distance themselves from their Moscow, their overwhelming dependence on Russian energy imports has prevented them from achieving complete independence. Gazprom supplies 30 percent of the European Union’s natural gas, and during a 2009 dispute with Ukraine showed the world that it can make Europe shiver if it turns the spigots off.

European Union nations have repeatedly attempted to find ways to diversify their energy resources, but the powerful environmentalist factions in many countries have lobbied against increased oil and gas imports from the United States and elsewhere. Innocently or no, these groups have played into the hands of Gazprom. After Germans protested in an emotional meltdown when a 2011 tsunami disabled the power supply of three Japanese nuclear reactors, German Chancellor Angela Merkel did an about-face on nuclear energy. With the support of 80 percent of the Bundestag, or German parliament, she decided to phase out nuclear power in that country by 2022. This prompted Russian President Vladimir Putin to jokingly tell the Germans:

I don’t understand how you will heat your houses. You don’t want the gas. You don’t develop nuclear energy. Are you going to heat with firewood? You also have to go to Siberia if you need firewood.

As CRC’s Dr. Steven J. Allen has pointed out, in European countries where there were no home-grown environmentalist groups and where grassroots organizing of the Western, leftist variety has never existed, Russia infiltrated the native populations with vocal opponents of fracking. These individuals and groups spread fear and misinformation among the nationals who then protested and blocked drilling efforts which would have significantly reduced those nations’ dependence on Gazprom and provided much-needed economic growth.

In 2012, Bulgaria issued a shale gas license to Chevron. Environmentalists pounced immediately and pressured the government into outlawing fracking entirely. Shortly thereafter, Gazprom signed a ten-year contract with the Bulgarian government, giving it a 20 percent discount.

A year later, the same story played out in Romania where the country’s Prime Minister Victor Ponta actually changed his position on the issue after seeing the success of fracking in the U.S. Chevron leased land in the small, impoverished village of Pungesti to drill for shale gas. Suddenly tens of thousands of peasant protestors descended on the village, convinced that fracking amounted to a foreign invasion of their sacred homeland. According to Dr. Allen:

In Romania, leftist protesters with ties to Moldova’s security apparatus, which is deeply tied to the Russians, joined with orthodox priests to protest fracking, with Russian TV providing blanket coverage suggesting that the villagers, their crops and livestock were all in danger from the practice.

One Moldovan separatist and Putin admirer wrote that fracking would cause “headaches, skin diseases, nasal bleeding, the explosive appearance of specific nervous system diseases, skin diseases, cancer, [and] earthquakes.” The narrative quickly became that of poor, brave oppressed villagers standing up to the exploitative American outsiders willing to poison Romanian children in their pursuit of filthy lucre.

Nevertheless, the success of fracking in the U.S. is causing more Europeans to want a piece of the petroleum pie – if not with domestic drilling, then through U.S. imports. In 2016, the twelve member states of the Three Seas Initiative – encompassing the Baltic, Adriatic and Black Seas region – imported 75 percent of their gas from Russia. In June 2017, Poland received its first shipment of liquefied natural gas from the U.S., and Polish President Andrzej Duda expressed hope that the U.S. could create a lasting “north-south energy corridor,” linking the Baltic and Adriatic Seas.

Russia’s interference and fearmongering within non-governmental organizations and alternative media in European nations has largely been successful in banning fracking. But with the threat of American liquefied gas imports into Europe, it has turned its sights on the U.S. Even Hilary Clinton admitted as much in one speech revealed by WikiLeaks, saying of her time as Secretary of State:

We were up against Russia pushing oligarchs and others to buy media. We were even up against phony environmental groups, and I’m a big environmentalist, but these were funded by the Russians to stand against any effort, ‘Oh that pipeline, that fracking, that whatever will be a problem for you,’ and a lot of the money supporting that message was coming from Russia.

While investigating Russian “meddling” in the 2016 election, the U.S. intelligence community discovered that Russia is heavily invested in seeing that fracking fails because of the challenges it would pose to Gazprom if more countries take up the practice. In 2015 alone Russia Today (RT), the country’s state-run media arm, produced 60 anti-fracking stories.

In July 2017 Republican congressmen Lamar Smith and Randy Weber wrote a letter to U.S. Treasury Secretary Steve Mnuchin demanding that he investigate the company Klein Ltd. As CRC’s Green Watch has reported, Klein is funneling millions of dollars through anonymous donations to the Sea Change Foundation – a left-wing 501(c)(3) “pass-through” organization – money that is then passed along to anti-fracking campaigns by active organizations on the far Left, like the Sierra Club. According to Smith, “This scheme may violate federal law and certainly distorts the U.S. energy market.”