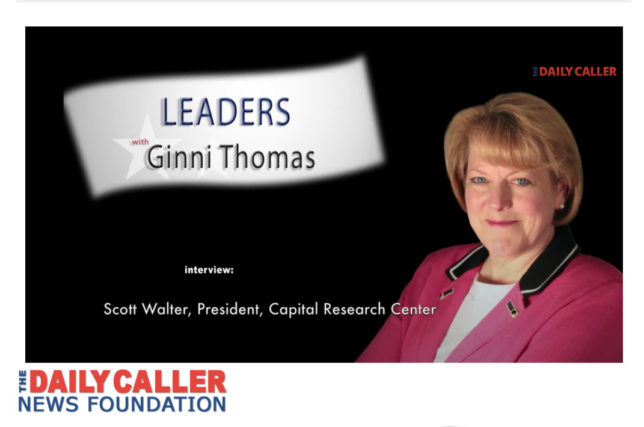 Capital Research Center is in the headlines for the work it does educating the American people about the network of radical left-wing nonprofit groups and super wealthy funders that want to fundamentally transform the country.

In the video interview Walter boiled down what we do at Capital Research Center and why we do it.

The Left has a “Borg-like” consciousness he said, offering an homage to the Star Trek franchise. Walter said left-leaning people are much more open to emotional appeals than conservatives who tend to prioritize real-world facts in policy discussions. To combat the Left, it is important to understand that first and foremost the Left is about power.

Highlights from the interview:

“We specialize in investigative research, not policy research, not regression analyses about the possible effects of a minimum wage hikes and whatnot, but rather who is funding the activist groups on the other side, and what are their tactics, what are their staff, and the rest. And this is something that the other side is very good about, exposing among conservatives, and they use that to try to deny the moral high ground, because some rich person is giving you money therefore we don’t have to listen to you or any of your statistics or facts. And it’s our job at the Capital Research Center to explain who are the funders and the activist groups on the other side so that there’s a level playing field.”

“The left loves government and it thinks that everything can be done better if it’s delivered by government and their opponents take the more traditional view that while government has a role to play, nonetheless civil society is where the real strength of America lies.”

“We should perhaps be fearful that the other side has this Borg-like collective consciousness that seems to function in politics, but I think the single biggest explanation is simply they are about power. The Left always seeks power, and if you seek power, you are not going to let yourself get distracted too much by these kinds of arguments. Plus, I also think that they’re much more concerned about emotional stories and much less concerned about nitty gritty facts. On our side you’ll see different people arguing nitty gritty facts, like ‘we need consumption taxes,’ ‘no, it should be income tax.’ These are the kinds of evidence-based rational disputes that people can have and that’s what most folks on the conservative side of the spectrum care about. But on the Left, it’s much more we need to take power and if this issue is hot for a few weeks of this cycle, jump on that issue. Don’t have any questions about it. Don’t investigate it. If I’ve got a great emotional story that’s all that matters.”