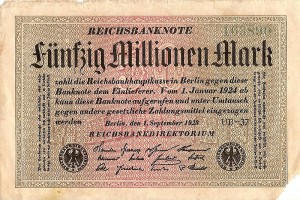 Above is a 50 million mark note from the Weimar Republic where hyperinflation reigned.

Investors were less than enthusiastic about the U.S. government’s latest auction of Treasury bills.

Stocks lost ground after a weak auction of U.S. government debt stirred worries about how easily Washington will be able to raise money to fund its economic rescue program.

The government is running up record deficits in order to fund an array of plans to provide stimulus to the economy and support to the ailing financial system. [emphasis added above]

This is just the beginning.