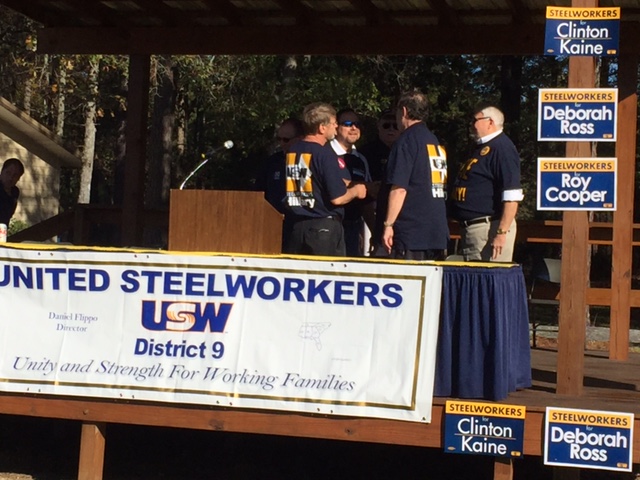 Earlier this year, the Trump administration—through the Department of Commerce, run by former steel industry investor Wilbur Ross—announced that it would levy tariffs on steel imports, dubiously claiming that they served national security interests. The results were predictable: Steel prices surged (and Secretary Ross’s former colleagues profited), while other American manufacturers had to pay more for their raw materials.

But as with all government interventions in the economy, there will now be a potentially disruptive and costly fight over the spoils. The latest entrant is the United Steelworkers labor union, which has threatened to strike against ArcelorMittal and U.S. Steel, the two largest unionized steel producers in the United States and the major beneficiaries of Trump’s tariff policy. The union has already authorized a strike against U.S. Steel if negotiations reach an impasse and reportedly has said it will do the same against ArcelorMittal, arguing that the union is entitled to a larger share of the additional profits the steelmakers have secured from the tariff.

The union has a key card to play if it decides to go on strike. Now that foreign steel is more expensive, the union’s leverage over a key sector of the economy has grown substantially, allowing the union to threaten the wider manufacturing economy (which is already hurting from the tariffs) with a work stoppage. This makes government intervention to “mediate” with (translation: buy off) Big Labor much more likely.

Given the stakes, a battle over the spoils of the tariffs was inevitable. Consumers and workers in steel-consuming industries are shouldering an increased financial burden while, well-connected steel-industry insiders line their pocketbooks. The Cato Institute’s Scott Lincicome writes, “Tariffs not only impose immense economic costs but also fail to achieve their primary policy aims and foster political dysfunction along the way.” A strike over the labor share of the windfall is a prime example of the “political dysfunction” Lincicome foresaw.

At the end of the day, industry magnates and union bosses may have more in common on tariffs than they would like to believe. Labor unions sought protectionist tariffs for decades, hoping for the very benefits Trump’s actions now offer the Steelworkers. Corporate barons in politically connected industries—like steel under Secretary Ross—have also advocated protectionist tariffs for decades, since the connected corporate operators captured the benefits at the expense of less-connected manufacturers and consumers. (This is, of course, secondary to the supposed advantages such economic policies are supposed to have on the economy, according to unions and business owners alike.)

Worse still, like all winner-and-loser-picking by the government, steel tariffs create political factionalism, since the chosen “losers” respond to government’s threats by looking for new friends and allies. And the “immense economic costs” are real: The right-leaning Tax Foundation estimates that the costs to national employment of all the Trump administration’s proposed tariffs (not just those on steel) will outweigh the benefits of the administration-backed 2017 tax cuts.