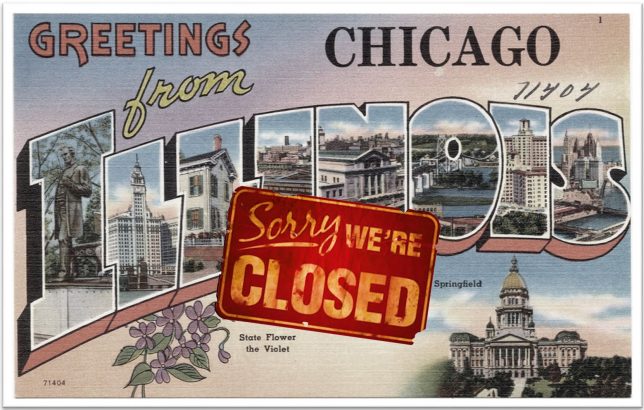 Thanks to Big Labor’s political machine, Illinois and California are in a race to see whose economy can go belly-up first – and they’re happy to let their taxpayers foot the bill.

Economic insolvency is the catastrophic result of making expensive promises the states cannot keep, euphemistically referred to as “unfunded liabilities.” It’s what George Will calls “the blue-state model” – suicidal tax rates, unmitigated deficit spending, and public employee pensions stretching as far as the eye can see – and it’s killing two of the country’s most populous states.

Like Puerto Rico before it, Illinois is on the road to bankruptcy. Since 2009, the state has had its credit downgraded 21 times by the three major rating agencies. On June 1, Moody’s Investors Service downgraded Illinois’ general obligation bonds to its lowest rating, and the lowest in the U.S. It’s not difficult to see why. Illinois is the only state currently operating without a balanced, complete budget since 2015. At 0.8 percent per year, it has the worst personal income growth in the nation – behind much poorer states like Mississippi and Nevada. From 2010 to 2016, more than 40,000 people left the state – “the worst in the nation,” notes the latest state budget.

As CBS reports, the state owes creditors $15 billion – roughly $1,171.00 per Illinoisan – equivalent to 40 percent of its annual operating budget. That figure could reach $47 billion by 2022, or over $3,671.00 per Illinoisan. According to one state financial official, court-ordered debt payments could consume 100 percent of Illinois’ monthly revenue – the state may resort to deferring payments to lottery winners! It’s so bad that earlier this year Bruce Rauner, the state’s embattled Republican governor, called Illinois a “banana republic.”

But worse still is the veritable tsunami of pension debt threatening to force Illinois into bankruptcy – a nearly unprecedented disaster. In 2015-2016, Moody’s reported that the state’s unfunded pension liability for Illinois’ five state and local public employee pension plans spiked 25 percent, to $251 billion, with no sign of abating (to put that in perspective, the state’s yearly budget is just over $37.3 billion). That’s more that $41,000 per Illinois household. Under current law, only cities and counties may declare bankruptcy. If Illinois continues to rack up pension debt, that will almost certainly change, inviting a federal bailout the country can ill-afford. 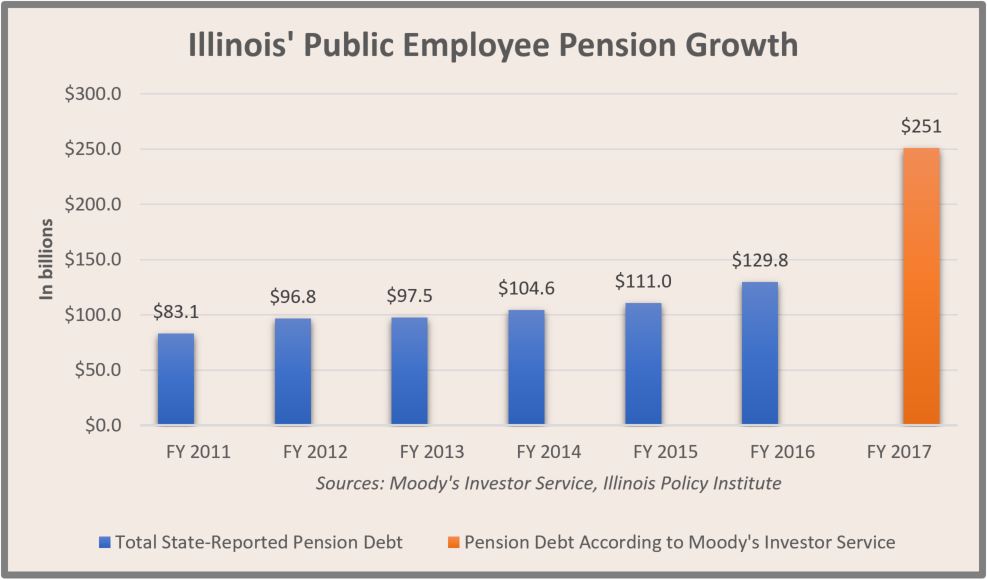 Moody’s cites “fruitless negotiations and partisan wrangling” as the source of Illinois’ growing insolvency, but they’re off the mark. The state government is unionized unto death, with 22 unions representing virtually all public employees. It’s the usual suspects: the Service Employees International Union (SEIU), American Federation of State, County and Municipal Employees (AFSCME), and the Illinois Federation of Teachers (IFT).

The state is run by a Democratic Party majority, which itself is beholden to this wealthy labor machine. In the 2010 gubernatorial race, these four groups combined gave nearly $4.5 million to Democratic candidate Pat Quinn. Quinn went on to support the status quo, borrowing $7 billion in two years to meet pension contributions. Longtime House Speaker Michael Madigan, the most powerful string-puller in Illinois, is their best friend in Springfield, according to Reuters:

“Rauner has yet to enact a single piece of his ‘Turnaround Agenda.’

“Madigan has blocked his proposals to weaken collective bargaining and workers’ compensation rights, portraying Rauner as an enemy of the middle class. The speaker also has stopped the governor’s attempt to impose term limits for legislative leaders and to change how legislative district boundaries are redrawn every 10 years, a process Madigan has used to help elect Democratic allies.”

Public sector unions have grown entrenched in state politics, and thus play the deciding role in elections. Decades of sweetheart deals promising early retirements, smaller employee contributions, and bigger payoffs to union workers in exchange for their political support have only tightened the relationship between these unions and the political class. As CRC has written, the real costs of these deals can be strung out for decades, so expediency has usually won out over fiduciary responsible.

Four years under a reform-minded governor like Rauner isn’t enough to undo decades of fiscal abuse. If, and when, Illinois is forced to declare bankruptcy, taxpayers will almost certainly be on the hook. That has not happened since Alabama went bankrupt in 1933, but at least then Alabamans could blame the Great Depression.

Illinois is stuck with blaming the Big Labor it deserves.