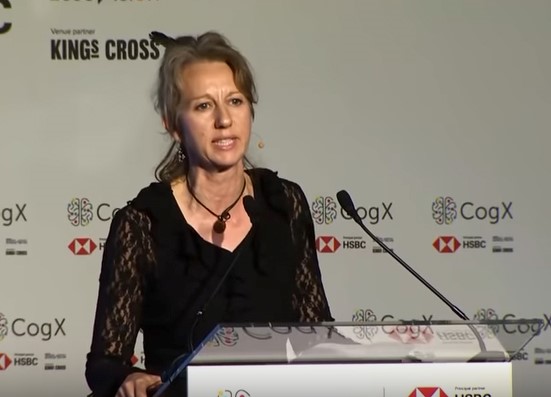 In an interview with the UK’s Evening Standard, Gail Bradbrook described herself as having been active in left-wing U.K. politics since age 14 when she joined the Green Party. Credit: Extinction Rebellion. License: https://bit.ly/2L0S5Bo.
by Ken Braun

When not momentarily high on mob action and spouting like Bolsheviks on the cusp of world revolution, Extinction Rebellion promotes three official goals. In predictably uncompromising fashion, the agenda is expressed as “demands” to which XR expects governments to surrender.

The most significant demand calls for a reduction of greenhouse gas emissions to “net-zero” by 2025. In practical terms, this means forcing an abrupt halt to 84.7 percent of Earth’s energy use within just six years (what we currently derive from using coal, oil, and natural gas). It would mean almost certain, unprecedented, and irreversible suicide for the global economy, quickly triggering mass poverty, starvation, disease and more for all but the wealthiest 7.7 billion of us. (Surely that’s an extinction worth rebelling against?)

The U.K. think tank Policy Exchange published an extensive report evaluating XR that was co-written by the former head of the London Metropolitan Police Counter-Terrorism Command. The analysis shows the radical group vaguely acknowledges the damage that the “net-zero” policy would cause, but ignores the severity of it.

“This idea we can keep having economic growth—these global goals that all look great with economic growth stuck in the middle of it—don’t make any sense to me,” said Extinction Rebellion co-founder Gail Bradbrook, according to Policy Exchange. “We have to de-growth the economies of the West, and in fairness and allow the economies of other countries to grow.”

On May 1—“May Day” on the communist calendar and just weeks after conclusion of the April disruptions in London—the U.K. Parliament caved in to the simplest of Extinction Rebellion’s demand and passed a motion declaring a “climate emergency.” Even this capitulation did not prevent XR from launching a “Summer Uprising” in several U.K. cities during July.

Finally, XR demands the formation of a “Citizens’ Assembly” to plot the course to attaining the “net-zero” policy. The ominous—but perhaps inevitable—totalitarian details of this demand were spelled out in a May 10 statement from XR, which linked to an article about the group’s “anti-capitalist politics” and added the comment: “When we have forced governments around the world to meet our demands, your local #CitizensAssembly advised by natural and social scientists who #TellTheTruth will determine the role of capitalism…”

Unlike the Unabomber, Extinction Rebellion seeks to bring down industrial capitalism with what it professes to be non-violent civil disobedience. Hallam regularly compares the group’s tactics to those of the U.S. civil rights movement of the 1960s, even though (as demonstrated below) the analogy fails in both theory and in practice. Hallam was described by the Guardian as an “academic from King’s College” whose specialty is “social change and protest.” The Times of London has portrayed him as a “former organic farmer, who claims that extreme weather destroyed his business a decade ago.”

Hallam’s theory is that at some point, with a movement large enough, XR will overwhelm the public safety and economic resources of nation states, leaving governments with no choice but to surrender.

“The police will go to government and say, ‘We’re not doing it anymore,’” Hallam told the BBC. “They’re not there to start arresting 84-year-old grannies or ten-year-old kids, there has to be a political solution.” During a November 2018 London road blocking by XR—a precursor to the April 2019 disturbances—Hallam told the Guardian, “They can’t do anything about it unless they start shooting people, and presumably they won’t do that.”

Similarly, Gail Bradbrook told the Guardian that “large-scale economic disruption” was needed to “rapidly bring the government to the table to discuss our demands.”

In an interview with the UK’s Evening Standard, Bradbrook described herself as having been active in left-wing U.K. politics since age 14 when she joined the Green Party, and confessed to still owning (but feeling guilty about) a diesel-engine vehicle she says was purchased when “they were supposed to be green.”

Another re-evaluation of her left-wing tactics occurred during a psychedelic drug experience she had during a 2016 “deep retreat” in Costa Rica. “You throw up and get all this noise in your head,” she said of the drug use. “It’s frightening. But you know it’s coming. I had a conversation with my left and right brain.”

She credits the Costa Rican conference within her cranium as causing the collaboration with Hallam that led to the creation of Extinction Rebellion.

The Policy Exchange report from the counter-terrorism expert also examines the recruiting pitches often used by Bradbrook and Hallam. It depicts numerous examples of Doomsday warnings of human extinction, starvation, rape, world war, and even fascism if the demands of Extinction Rebellion are not fought for.

“At two degrees centigrade you can’t grow grains at scale in the center of continents,” said Hallam, in one example from February 2019. “It means economic collapse. That means mass starvation. Many people won’t die from lack of food, they’ll die from the secondary effects; the slaughter of global war, mass mental breakdown, mass torture, mass rape. You all know this, it’s all connected. It’s the end. It’s over.”

In the next installment of Unabomers Without Bombs, learn about the radical tactics Extinction Rebellion is willing to engage in to “save the planet from extinction.”