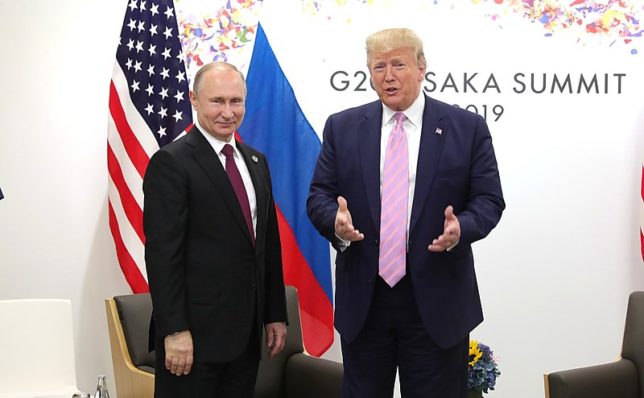 For comprehensive profiles of the issues addressed below, please see the InfluenceWatch entries for the Trump-Russia Collusion Claims and the Lincoln Project.

The debunked Trump-Russia election collusion claims clawed their way back into the news on July 15. A trio of conspiracy theorists led by Luke Harding of The Guardian wrote that they had perused “leaked Kremlin documents,” including a “decree appearing to bear Putin’s signature” that ordered “Russia’s three spy agencies” to “find practical ways to support Trump.”

Left-leaning hoax buster Aaron Maté let this assertion stew for a couple of weeks, and then on July 29 stated that the New York Times, CNN, MSNBC, ABC, NBC, and CBS had all totally ignored Harding. Maté noted the exception was the Washington Post, but only because the WaPo went the extra mile to say it was “hard not to be skeptical” of The Guardian’s claims.

Each of those stenographer media outlets once slavishly regurgitated the hoaxes of Harding and far too many veracity-challenged “sources familiar with the situation.” The Washington Post and New York Times even shared a 2017 Pulitzer Prize for

deeply sourced, relentlessly reported coverage in the public interest that dramatically furthered the nation’s understanding of Russian interference in the 2016 presidential election and its connections to the Trump campaign, the President-elect’s transition team and his eventual administration.

A cynic might say that with Joe Biden in the White House the media no longer needs salacious ghost stories about Putin pulling Trump’s puppets strings.

More charitably, a skeptical news consumer might find it hard to accept that the Crime Boss of the Kremlin sits in his office and personally autographs highly incriminating “Go Forth and Be Evil!” memos to his spooks. Even MSNBC has its standards.

But Rick Wilson wasn’t so clever. The co-founder of the Lincoln Project promoted The Guardian report on Twitter, saying on July 15: “Woke up to the story and still blown away by it.”

The Lincoln Project is a super PAC created for the 2020 election by a cabal of the credulous Left’s favorite former Republican campaign hacks. It was given huge chunks of money during the 2020 election from Democratic Party-aligned donors such as Majority Forward, the Sixteen Thirty Fund, Stephen and Susan Mandel, and Gordon Getty.

A February 2021 investigation by the Associated Press reported that only $27 million of the $90 million raised by the Lincoln Project was spent on campaign media purchases. Meanwhile, the AP said more than $50 million landed in the coffers of “firms controlled by the group’s leaders,” who were paid “exorbitant consulting fees.” Another February investigation by The 19th, a nonprofit news website, cited “multiple people” within the Lincoln Project who heard co-founder Steve Schmidt joke that he considered the PAC to be his way of building “generational wealth.” More acerbically, the Boston Herald editorial board judged the organization to be a “lucrative scheme to simply enrich themselves from the bank accounts of unsuspecting anti-Trump voters.”

The Trump-Russia collusion hoax was likely smart business for the grifters. Staying loyal to it probably kept skeptical eyes away from where the loot was going.

Rick Wilson was “all in” on the hoax before he was in on the Lincoln Project. In a November 2017 commentary, he accused former Trump campaign aide Carter Page of being a traitor, saying “Page didn’t just talk the pro-Russian talk; he threw himself into the eager arms of SVR [Russian intelligence] operatives.”

Most of the rest of Wilson’s screed was ad hominem personal insults lobbed at Page: “reeking of late-stage virginity,” “possibly murderous android,” “stupid,” “world-class dork and sucker,” and so forth. Whether this was the writing of a seasoned political professional or a gullible 7th grader gifted a grammar school thesaurus is perhaps debatable.

But there’s no debate about Carter Page. He was engaged in a mild degree of espionage, but for the good guys, not Putin! In December 2019 the Department of Justice’s Office of the Inspector General unearthed that Page had become an “operational contact” (i.e., informant) for the CIA in 2008 and had willfully (to say nothing of patriotically) given the agency information regarding “his prior contacts with certain Russian intelligence officers.”

FBI lawyer Kevin Clinesmith buried this cooperation, falsely claiming in an internal memo that Page was “not a source” for the CIA. Just these three words helped put Page on the business end of an unjustified wiretap and led to the hapless Clinesmith pleading guilty to a federal felony.

This is so sad because some employers would appreciate Clinesmith’s creative writing. Luke Harding and Rick Wilson have each written hundreds (likely thousands) of words amplifying the collusion hoax. Their only discomfort has been paying taxes on the paychecks gushing in from the gullible.