The Insider’s Tale: Looking Through a (Union) Glass, Darkly

In California, SEIU Local 1000 represents some 95,000 workers in state government. Back in 2005, the local made members and non-members alike pay a special fee to fund a massive public statewide campaign in opposition to a set of ballot propositions backed by Republican Governor Arnold Schwarzenegger.

The propositions involved such matters as teacher tenure requirements, the use of union dues for political campaign contributions, state budgetary spending limits, and redistricting. Governor Schwarzenegger claimed they represented necessary corrections to fix the state’s problems. This is what he had been elected to do, after all. But all the propositions went down to defeat, a disaster that has set the unfortunate course of California politics to the present day.

Of course, unions took the money for their anti-Schwarzenegger campaign from non-members’ paychecks. Later, after the elections they gave the non-members they had fleeced a chance to get their money back. Make no mistake, this was a war chest that had essentially funded the union campaign interest-free. Regarding these controversial ballot questions, I have no doubt that many non-members opposed the union position. But the union decided that a big chunk of their efforts “lobbying the electorate” was an expense chargeable to both members and non-members, a normal part of bargaining the contract.

Once again, SCOTUS didn’t buy that logic. In its 2012 opinion in Knox v. SEIU the Court found that the union overstepped the bounds of the acceptable. Indeed! The idea that unions could forcibly borrow non-members’ money in the name of fair play and use it to fund a campaign many of the latter opposed is grotesquely un-American.

Unions in the public sector have been increasingly involved in important questions of public policy. As membership organizations with a direct interest in such questions, they are quite right to do so. But these are political questions, root and branch. Participation should be voluntary, available to members alone. Not enforced on non-members.

I don’t expect to convince any union officers or staff still wandering the union wilderness that my way is the right way. To them, my arguments are reactionary, tools the forces of capitalism have always used to bust unions. The only analysis that unions countenance support a dire assertion: without bargaining unit contracts and agency fees unions will become terminally weak. A weak union might as well not exist; any arguments against unfair practices is nothing but the buzzing of the saw that cuts down the workers.

Thankfully, I found the right path out of that wilderness. Now I’m free, a private citizen who can say things just because I believe them to be true.  And I’m no longer willing to view public life in terms of a bitter power struggle.  So here’s my heartfelt plea to both those outside the union world and the dedicated rank-and-file members, shop stewards and activists inside it:

I ask you to consider Right to Work and agency fees through a different lens than the union’s.  The union lens is darkly polarized. It blocks the light from every angle except their own.

In my years as a high-ranking union official, I learned that bargaining unit contracts and agency fees actually weaken the unions they’re supposed to strengthen. Such draconian measures are not worth the extra money they bring in. They make strong-arm hoods out of union activists and put unions at war with the people they exist to serve. They garner resentment instead of support. In the name of an abstract and unreal liberation, they do violence to the actual freedom of individual people. 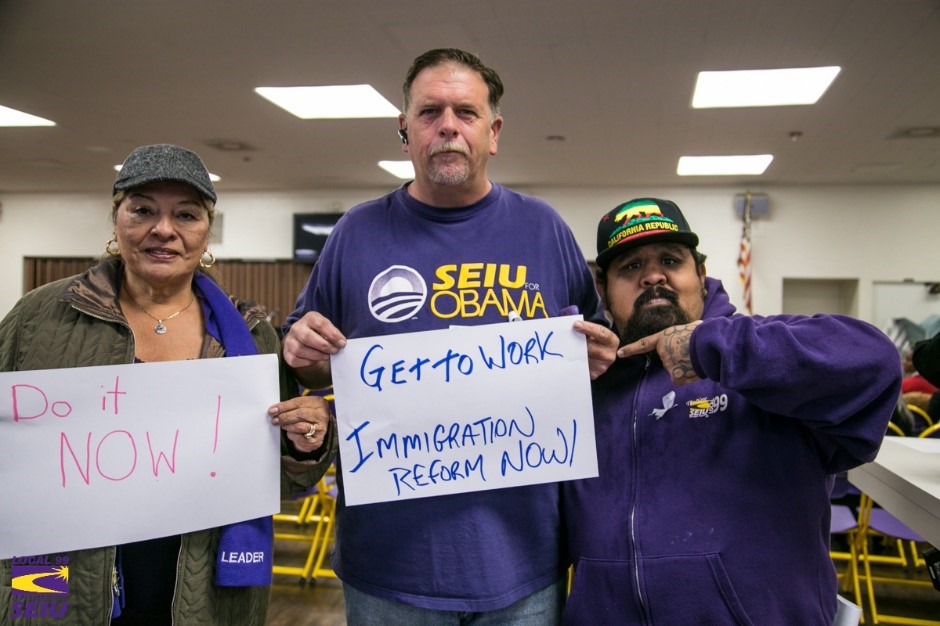 We should acknowledge bargaining unit contracts and forced dues for what they are, subsidies taken by force from people who don’t want to join the union. Seriously, mugging people may not be the best way to lure them to join a union! Here’s the truth: if your union is any good, it has nothing to worry about from the Right to Work.

Congress should pass Right to Work legislation for the private sector as soon as possible. SCOTUS needs to see that it created a monster 40 years ago in the Abood decision, and drive a stake through that monster’s heart. Disingenuous appeals to fair play and spurious complaints about free riders do not justify the union tyranny many now experience.

Maybe it’s time to see if unions can survive on their own in America, by the simple expedient of persuading non-members to join. But maybe those in the higher echelons of the national unions already have a grim suspicion regarding this matter. What if their fears are confirmed and union’s collapse under their own weight?

I saw the panic that set in among union leaders after the disastrous oral arguments in Friedrichs v. CTA at the Supreme Court last year. Most observers believe that only the death of Antonin Scalia, which left the Court divided 4-4, prevented it from protecting public-sector workers. Now, with Neil Gorsuch in Scalia’s place, there’s a good chance the Court will move forward again.

If the American labor movement can only survive on artificial life-support–which is to say, on forced dues and bargaining-unit contracts–then it’s already dead. But in the end, there’s nothing to be feared from the death of an illusion.