Consulting for the Left: “Strike in a Box” Professionals 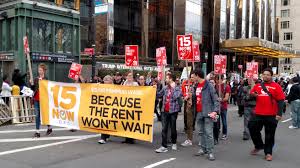 Campaign consulting for left-wing candidates are just one of BerlinRosen’s activities supporting left-wing political actors. They are just as heavily involved organizing and handling communications for labor union corporate campaigns. In 2016, for example, unions spent over $7.9 million on BerlinRosen’s services.

Certainly, the most notable labor union campaign involving BerlinRosen is the “Fight for $15,” a campaign funded by the Service Employees International Union (SEIU) aimed at doubling the federal minimum wage and unionizing fast food restaurants. Organizing protests has proven lucrative for BerlinRosen. In 2016, SEIU paid the firm $1.75 million; prior years also showed million-plus-dollar spending from SEIU on BerlinRosen services. The firm was credited with developing a “strike in a box” toolkit to assist messaging and organization for labor demonstrations.

BerlinRosen’s activities in the campaign have been controversial. Progressive commentators noted that aggressive BerlinRosen and SEIU organizing crowded out worker-to-worker level organizing and actually risked the success of the campaign. Observers also speculated about low worker involvement: One Associated Press report on demonstrations in New York City indicated “it wasn’t clear how many participants were fast-food workers, rather than campaign organizers, supporters or members of the public relations firm that has been coordinating media efforts”—meaning BerlinRosen. Conservatives suggested that BerlinRosen’s looming presence and a comparative lack of worker involvement reeked of “Astroturfing”—a particularly apt expression denoting the creation of fake grassroots movements.

In addition to its work with the SEIU, BerlinRosen has represented other liberal groups involved in Fight for $15. The National Employment Law Project (NELP), a union-funded employment law and policy advocacy group, retained BerlinRosen as a consultant, paying the firm $122,734 in 2014. A BerlinRosen consultant also worked with NELP to ensure press coverage for a controversial study of the now infamous Seattle minimum wage increase.

The United Food and Commercial Workers (UFCW) retained BerlinRosen for services related to staging an organizing campaign. The “Organization United for Respect at Walmart” was organized by the UFCW to attempt to unionize retailer Wal-Mart; BerlinRosen handled public relations for the group and its counterpart project under the UFCW’s own banner. From 2012 through 2015, while OUR Walmart was in operation, the union paid BerlinRosen approximately $1.1 million for representational activities. Again, a nice haul.

One of BerlinRosen’s other labor clients is the Communications Workers of America (CWA), one of the most left-wing of all labor unions. In 2011, the CWA retained BR for a campaign against the New York Times Company on behalf of CWA-represented employees in a contract dispute. The consulting firm performed the same service for CWA in several disputes, organizing campaigns, and strikes involving Verizon, Cablevision, and AT&T. BR has worked for CWA since 2006, receiving over $3.5 million in 2016 alone from the labor union!

In 2015, the United Auto Workers (UAW) retained BerlinRosen to advocate for members to ratify its agreement with Fiat Chrysler Automobiles. UAW paid BerlinRosen over $470,000 for its services.

In the final installment of “Consulting for the Left,” we expose BerlinRosen’s extensive ties to the professional Left and the Democratic Party.