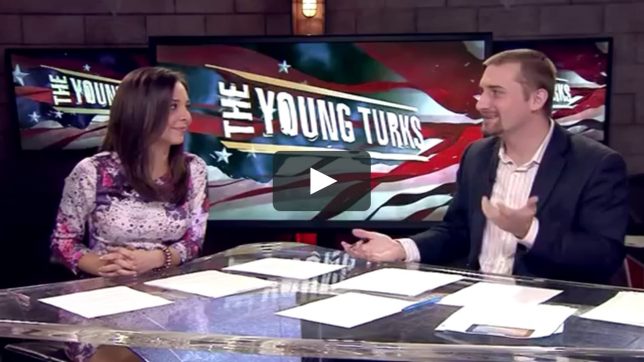 TYT’s disdain for the truth is not always as blatant as the lies above. Sometimes it is what Uygur et al. do not say or acknowledge that reveals their true nature. Nowhere is this more evident than in TYT’s handling of opposition to the organization’s name. The term “Young Turks” has been used in the U.S. for many years to describe idealistic youth impatient to bring about radical change, and that is the meaning that TYT claims to embrace. The original Young Turks, however, were members of a nationalist party that rose to power in the Ottoman Empire in the early 20th century, led the government during World War I, and were responsible for the deaths of more than one million of the empire’s minority Armenians. Turkey has consistently held that the deaths were the unfortunate consequence of war, but historians have long considered the killings genocide. In 2005, the International Association of Genocide Scholars wrote that the (Ottoman) Young Turks had engaged in “a systematic genocide of its Armenian citizens—an unarmed Christian minority population . . .  through direct killing, starvation, torture, and forced death marches.”

Uygur is of Turkish ancestry, and was on record in 1991 and in 1999, shortly before founding TYT, defending the Ottoman Empire against the charge of genocide. Undoubtedly, Uygur was familiar with the Young Turks of history. We can only take him at his word that they were not the inspiration for his network’s name. It is quite possible that a 32-year-old progressive in 2002 wanted nothing more than a name suggesting youthful rebellion. Uygur can even be given the benefit of the doubt, that after years of controversy, it was nothing more than coincidence that the co-host he hired, Ana Kasparian, is a proud Armenian-American.

In the interest of transparency, however, the TYT founder should be held to answer for his continual equivocations regarding his position on the Armenian genocide. Frequently articulate and always opinionated on air, Uygur is almost unintelligible on the rare occasions he discusses the subject. He pretended to provide clarity in a 2016 TYT blog post in which he rescinded his past statements on the issue, but stopped short of admitting genocide occurred. He concluded with a curious promise: “I am going to refrain from commenting on the topic of the Armenian genocide.”

Likewise, Uygur’s colleagues should be called out for silencing those who find fault with the organization’s name. During a question and answer portion of a 2016 TYT symposium, for instance, an audience member tried to ask the panelists about the appropriateness of the name. Before the young man could finish his question, TYT’s John Iadarola interrupted him and called for a break. When the symposium reconvened, the questioner was gone and the panelists moved on to another topic.

Most damning is TYT’s double-standard. For many years, network talent have criticized the continued use of the name Redskins by the Washington NFL franchise, and in 2013 Uygur stated unequivocally that the name has “got to go.” This is not an unreasonable demand, especially for a progressive news organization, despite a poll by the Washington Post finding 90 percent of Native Americans are not offended by the name. No one has polled Armenian Americans, but it might behoove Uygur to consider what percentage might find “The Young Turks” offensive.

The common refrain at TYT is that its journalists are fiercely independent and anti-establishment. Ana Kasparian described the Young Turks as “rebels” who are “very different from what you see in traditional media.” These claims are true to a point. Most of TYT’s commentary is certainly progressive and frequently even socialist. Additionally, Uygur and team have consistently backed leftist political candidates running against establishment Democrats. TYT was an early supporter of Senator Barrack Obama over Senator Hillary Clinton for the Democrat’s 2008 presidential nomination and of socialist Senator Bernie Sanders over Clinton in 2016. Recently, TYT supported the candidacy of Democratic Socialist Alexandria Ocasio-Cortez over “the congressman from Wall Street” Joe Crowley in the 2018 primary for the 14th Congressional District in New York.

TYT has also been consistently tough in pointing out the hypocrisy of the Democratic Party, revealing its connections to and donations from large banks, oil companies, “big pharma,” and defense contractors, as well as its continued support for the U.S. wars in the Middle East. Throughout the 2016 election, TYT also reported on the corruption within the DNC, especially its sordid efforts to keep Sanders from becoming the Democratic candidate for president. Acerbic comedian and Aggressive Progressives co-host Jimmy Dore summed up TYT’s apparent mindset in 2008:

American elections are designed to suppress the vote . . . We live in an oligarchy. Your democracy has already been stolen from you . . . There needs to be a revolution in America. All of our institutions are completely corrupt, especially the news media . . . Both parties are co-opted by the same people and we need a party for the American people.

And then TYT did a one-eighty. When it became clear that Hillary Clinton would win her party’s nomination, TYT shed its independence and took the very conventional establishment approach of throwing its full support behind the Democrat it had long attacked. Kasparian lamented that she would have to “choose the lesser of two evils” and Uygur was emphatic in his opposition to a third-party run by Sanders. So, after reporting extensively on the corruption within Clinton’s Democratic machine and advocating for Sanders’ political philosophy and positions, TYT dropped its insistence on speaking truth to power. Before the Democratic Convention had even been gaveled to a close, Uygur went on air delivering a glowing report on how “hope was the defining trait” of the DNC.

This reversal could not have been much of a surprise to TYT’s audience—especially the die-hard Sanders supporters. In June 2018, TYT conducted a YouTube poll of its viewers regarding their intentions on election day. Uygur posted on Twitter that he was “shocked” that 83 percent said they would never vote for Hillary Clinton. Over 500 Twitter users posted responses, most of them questioning Uygur’s progressivism and concluding with the hashtag “#NeverHillary.” One aggrieved progressive would later write that Uygur “sold out and still lost” and that the TYT model is, “Report, investigate, foment righteous indignation, and then promptly do nothing but fall in line.”

TYT’s sources of funding also call into question its claim of independence. In 2014, the network received $4 million from Roemer, Robinson, Melville & Co., a private equity firm led by former Republican Governor of Louisiana Buddy Roemer. Then, in 2017, TYT raised $20 million in venture capital from WndrCo, owned by Jeffrey Katzenberg, a prominent supporter of Democrats and a multi-million-dollar super PAC financier, and from Greycroft, a firm led by billionaire Alan Patricof, a DNC donor, chairman of Entrepreneurs for Clinton in support of Bill Clinton’s presidential run in 1992, and a national finance chairman of Hillary Clinton’s 2008 presidential campaign.

Suggesting a further embrace of the establishment, in January 2018, TYT hired 30-year media veteran Deanna Brown as the network’s first president. Very much a mainstream media figure, Brown had formerly served as CEO of Federated Media, president of Scripps Networks Interactive, Vice President and General Manager at Yahoo, and Vice President of Programming at AOL.

In the conclusion of The Young Turks, see examples of TYT’s “progressivism” in action.