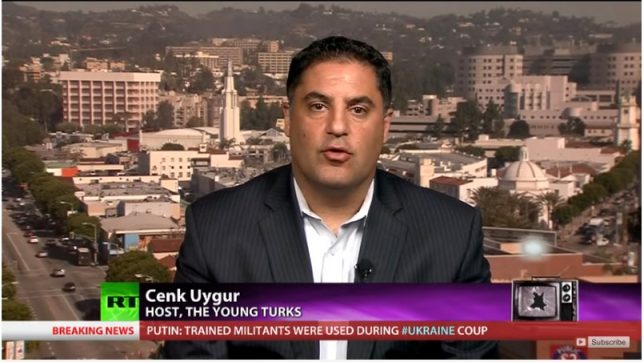 The Young Turks (TYT) may be the most popular progressive programming of which you have never heard. TYT is a network of news, commentary, sports, and popular culture shows targeting left-leaning American millennials on YouTube and a variety of other digital platforms. More than 75 percent of TYT’s viewers are under 35 years old and roughly 80 percent are male. If you are not a “Bernie Bro,” Social Democrat, or do not otherwise fit their young progressive demographics, you can be excused for your lack of familiarity with TYT.

Uygur, his co-founders, and his various co-hosts over the years have consistently held that TYT is the anti-establishment alternative to big media and the progressive alternative to left-of-center networks like MSNBC and CNN. They insist that while TYT has a “point of view,” it is fiercely independent of corporate influence and machine politics and always pursues the truth wherever that may lead. “What we add to the debate is honesty,” said Uygur in a 2010 interview. “Right now, most of the major media is structured around the all-important concept of access. The political channels need access to the politicians, so they suck up to them… This creates a powerful incentive to be fake and not deliver the actual news… And this creates an enormous competitive advantage for us… To put it more bluntly, people are tired of the bullshit and we don’t bullshit them.” Except they do. TYT’s promises of honesty, transparency, independence, and even progressivism are violated by Uygur and company on a regular basis.

One need only watch a few episodes of virtually any TYT program to witness political spin, half-truths, and even outright lies. In the interest of brevity here are three recent examples:

August 11, 2018—On an episode of TYT’s flagship YouTube show, Uygur and panelist John Iadarola parroted a Democratic talking point that deliberately misreads a report published by the Mercatus Center, a free-market oriented economics think tank affiliated with George Mason University. The commentators misrepresent the report’s analysis of the fiscal impact of “Medicare-for-all,” a universal health care bill championed by Democratic Socialist Senator Bernie Sanders (I-Vermont). The two claimed the report proves that Sanders’ scheme will save Americans $2 trillion over ten years. The report’s author Charles Blahous, however, had said a week earlier that this assertion, first made by Sanders and then repeated by several Democrats running for office in 2018, deceitfully cherry-picks one scenario in the report: for the sake of research Blahous had accepted Sanders’ assumptions regarding reimbursement rates, administrative costs, and drug prices. Blahous had already explained that Sanders’ assumptions are not realistic and the price tag of universal health care would most likely be much higher. “It’s clear that Blahous bent over backward to accept Sanders’ assumptions, only to find they did not add up,” wrote Glenn Kessler on August 7 for The Fact Checker at the Washington Post. Kessler concluded by giving the $2 trillion claim “Three Pinocchios.”

August 10, 2018—Also on the main TYT YouTube show just a day earlier, Uygur repeated another falsehood recently embraced by left-wing pundits and candidates, but that had long ago been debunked. Suggesting a precedent for conservative support of giving illegal aliens U.S. citizenship, Uygur asserted that President Ronald Reagan “did amnesty . . . not pathway to citizenship, actual amnesty.” Uygur misled his viewers this time too. The Immigration Reform and Control Act of 1986, to which Uygur had referred, was compromise legislation that Reagan supported because it provided a means to end rampant illegal immigration. In exchange for a pathway to citizenship for certain illegal aliens, the compromise called for significantly tougher security of U.S. borders and enforcement of immigration laws. As opposed to the blanket amnesty that Uygur suggested, the legislation was very specific about to whom it applied and how they could earn citizenship. Only illegal immigrants who could prove they had lived continuously in the U.S. for five years would be eligible. Initially, they would be granted temporary resident status, and after 18 months, they could be upgraded to permanent residency, and after another five years, to citizenship. The immigrants who met these criteria also had to pay application fees, learn to speak English, demonstrate an understanding of American civics, pass a medical exam, and register for military selective service.

So, Uygur completely misrepresented Reagan’s intentions, but he also ignored what happened after passage of the immigration legislation: the enforcement provisions were ignored by future politicians, including both Republican and Democratic presidents, and illegal immigration continued to soar. Had he known this would be the legacy of his compromise, Reagan would never have supported the reform. As far back as 2006, Ed Meese, who served as Reagan’s Attorney General, put the lie to Reagan’s “amnesty.” In response to new calls to give citizenship to illegal immigrants, Meese penned “What would President Reagan do?” for Human Events. “For one thing,” wrote Meese, “he would not repeat the mistakes of the past, including those of his own administration.” Continued Meese, “He knew that secure borders are vital, and would now insist on meeting that priority first.”

July 10, 2018—In front of a large back-drop proclaiming, “Make America Hate Again,” Uygur and co-host Anna Kasparian discussed the vicious July 4 attack on a 91-year-old Mexican man visiting family in Los Angeles. Rodolfo Rodriguez had been pushed to the ground and severely beaten with a piece of concrete by a woman who screamed at him, “Go back to Mexico.” Rodriguez suffered a broken cheekbone, two broken ribs, and multiple cuts and bruises to his face. “Who does this?” asked Uygur. “I’ll tell you who does this,” answered the angry host himself, “insane racist right-wingers encouraged by the current administration.” He then suggested the attacker was a white Trump supporter and concluded with, “They walk among us. They hate people that don’t look like them . . . fascism is here.”

The problem with Uygur’s commentary is that for days the press had been reporting that the attacker was Laquisha Jones, a 30-year-old black Los Angeles woman who had been arrested multiple times for prostitution, vandalism, and criminal threats. Not exactly Trump’s demographic. Amazingly, just the day before Uygur said to Kasparian on the Aggressive Progressives show, “facts are facts whether they’re inconvenient or they’re not inconvenient. We should never make the same mistake as the right wing: ‘I don’t like those facts, so I’m just going to ignore them and call them fake news.’”

Further calling into question TYT’s embrace of honesty is the network’s 2018 hiring of disgraced left-wing newsman Dan Rather. In 2004, Rather lost his job as anchor and managing editor of the CBS Evening News after he relied on fabricated and forged documents in a presidential election year story alleging incumbent President George W. Bush had shirked his duties while serving in the Texas Air National Guard in the early 1970s. Outrageously, in April 2018, TYT posted a “video guide to protecting yourself against fake news” hosted by Rather. “If you’re really interested in identifying fake news . . .” begins Rather, “If you’re truly invested in the work of being a good informed citizen, may I respectfully offer a brief primer.” Announcing his hiring of Rather, Uygur raved, “Dan’s point of view is not only smart and informed and incredibly experienced, but also authentic.”

In the next installment of The Young Turks, learn about this news organization’s double standards and weak commitment to its own ideals.