The Self-Serving Progressivism of Elizabeth Warren and Her Daughter 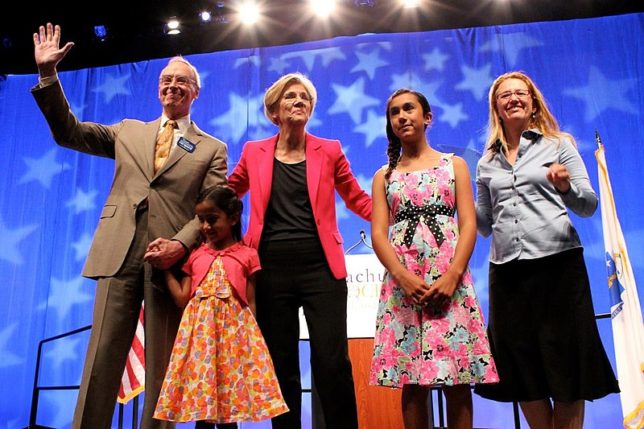 Tyagi is a left-progressive who has extensively involved herself in politics. She serves as trustee emeritus (formerly board chair) of Demos, a far-left policy research organization that advocates and litigates for government-run healthcare, voter mobilization, the development of “global governance” which would essentially integrate the U.S. into a U.N.-centric foreign policy paradigm, “state-level climate equity policies,” and the abolition of political speech via campaign donations. Demos believes that we need to be “rethinking American capitalism” and that large-scale changes to the structure of the U.S. economy are needed in order to achieve a “sustainable, just, and democratic future.”

Demos receives substantial funding from the largest and richest labor unions in the country along with powerful private foundations like the Ford Foundation and the billionaire Bill Gates’ organization. Tyagi was formerly on the board of the left-wing magazine American Prospect, which is a publishing partner of Demos; the magazine has released glowing articles on Elizabeth Warren’s political career.

The sort of policies that Demos, Warren, and her daughter promote are far from mainstream Democratic Party ideas—or, at least, what used to be mainstream. In fact, they border on redistributionist, collectivist, and socialist visions, with goals to fundamentally restructure the economy so that surpluses of wealth will be harder to accumulate for everybody, including for small business owners and middle-income people.

Fortunately, Amelia Tyagi has already obtained her wealth, so she won’t need to worry about that. After attending Brown University and the Wharton School of Finance, Tyagi co-founded HealthAllies, a venture capital-funded health benefits firm that was purchased by United Health Group. She spent her career as a management consultant, first at the elite McKinsey & Company consultancy firm as an Engagement Manager involved in healthcare, pharmaceuticals, education, and finance, and then later as an independent consultant. She is the CEO of Business Talent Group, a contractor of thousands of independent consultants, which she co-founded in 2007.

Elizabeth Warren has a series of contradictions herself, such as having been a full-on fiscal conservative during the 80s and early to mid-90s, or having been the champion scrutinizer of the TARP Wall Street bailout program (whose watchdog committee that questioned them couldn’t answer where they had spent $10 million in taxpayer money) for forcing taxpayers to take on “toxic” private-sector financial assets from investment banks, while only a few years later defending the same behavior in regards to student loans once she was in the government serving as a senator.

To be a fiscal conservative while you are making your money and then work to remove the opportunity of entrepreneurship for everyone else you left behind is to set up roadblocks.

Far-left outlets like Jacobin have questioned the authenticity of Warren’s promises to pursue a Medicare for All program at the federal level if her daughter has made part of her fortune off the private health insurance industry. But a more sensible and less fringe line of critique would be to ask if it is hypocritical of Warren and Tyagi to make their wealth and then burn the pathways of wealth creation for everyone else. The vast majority of people—71.8 percent of nonfarm payroll employees—have to work in the private sector. Not everyone can work as a government bureaucrat, an academic, a managerial professional, or a nonprofit wonk, and these jobs are very much insulated and shielded from the fluctuations of the economy as it is.

Removing the ability for regular people to make money through starting businesses of their own by taxing everyone into relative poverty, except the politicians, bureaucrats, and policy experts that will be doing the taxing, is hypocritical at best, and mercilessly power-hungry at worst.