The “Public Health” Industrial-Complex Behind the Anti-Vaping Push 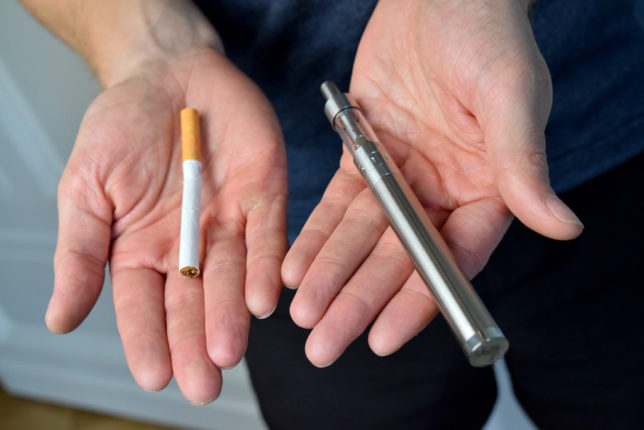 Thanks to major campaigns educating Americans about the health risks posed by smoking cigarettes, tobacco consumption has steadily decreased. But what about the new generation of e-cigarettes or vaping devices? These new nicotine products have generated curiosity among young adults and those looking for an alternative to cigarettes.

Earlier this year, the American Cancer Society (ACS) released two separate statements on the use of e-cigarettes and vaping devices.

In the first statement, which was released in February 2018, the ACS contended: “Based on currently available evidence, using current generation e-cigarettes is less harmful than smoking cigarettes.”

While ACS clarified that scientists have yet to study long-term use and its impact on human health, ACS published in its flagship academic journal, CA: A Cancer Journal for Clinicians, that e-cigarettes (referred to as electronic nicotine delivery systems, or ENDS) are a valid means for cessation from combustible tobacco:

Although many ENDS deliver nicotine, flavor additives, and other chemicals, they do not burn tobacco, a process that yields an estimated 7000 chemicals, including at least 70 carcinogens.

Despite the organization’s scientific position on ENDS, ACS and its affiliated 501(c)(4) organization, the Cancer Action Network (CAN), continue to work with other health advocacy and public health organizations to restrict the use, sale, and distribution of e-cigarettes. Data provided by the Center for Responsive Politics indicates that, in 2017 alone, ACS spent $6.5 million on lobbying through CAN.

For example, CAN sued the federal Food and Drug Administration (FDA) with six other public health groups in March of this year for delaying regulatory action on the e-cigarette and broader vaping industry. In November, CAN and its co-plaintiffs got what they wanted. FDA Commissioner Scott Gottlieb released strict proposed regulations on these products. These regulatory rules include banning certain e-juice flavors, menthols, and other products from general retail locations.

The anti-vaping push from public health organizations is coordinated, well-funded, and tied to powerful entities in government and corporate America. At least, that is according to Competitive Enterprise Institute senior fellow Michelle Minton in her new study, entitled Fear Profiteers: How E-cigarette Panic Benefits Health Activists.

“Public health advocates and officials should help consumers by telling them the truth about e-cigarettes—that they are far less dangerous than smoking cigarettes,” Minton said in a statement. “But instead, they are scaring people and imposing government restrictions on e-cigarettes that will discourage smoking cessation and put millions of smokers’ lives at further risk.”

In her report, Minton examines how public health organizations like ACS, the Campaign for Tobacco-Free Kids, the American Lung Association, and others are coordinated among major private grantmaking foundations—notably, the Robert Wood Johnson Foundation (RWJF), the nonprofit arm of corporate giant Johnson & Johnson. RWJF has an estimated $11 billion endowment while also being responsible for establishing the influential Campaign for Tobacco-Free Kids (CTFK). According to RWJF’s 2017 Form 990-PF full tax filing, CTFK received $2,050,865 from the existing long-term investment of $117 million Minton highlighted.

Johnson & Johnson is the sole producer of Nicorette, a market-dominating nicotine gum used by those attempting to quit smoking. Major pharmaceutical companies like Johnson & Johnson work with tobacco control groups to lobby regulators to limit smoking, thus increasing demand for its nicotine products.

According to Minton’s report and a 2016 commentary published by Monica Showalter of the American Media Institute, large pharmaceutical giants like Pfizer, Novartis, and GlaxoSmithKline, along with Johnson & Johnson, have spent billions to develop nicotine patches, gums, medications, and other products to help smokers stop. Ultimately, the rise of e-cigarettes and vaping threaten their market share. Big tobacco companies also have a similar business model based on regulatory capture. Major cigarette manufacturers, like Altria and Reynolds American, have worked with anti-tobacco advocates to stamp out vaping from encroaching on its market share.

Tobacco-control organizations also use federal grants for scientific research so that federal agencies such as the National Institutes of Health (NIH) can lobby Congress and the executive branch as well as fund the groups’ research agendas.

Groups such as ACS and CTFK receive these federal research grants and use the money to develop specific lobbying and political strategies. At the same time, these studies also help groups assert policy change within the executive branch and help elect allies in Congress. Together, this “public health industrial-complex” is referred to as a “Bootlegger-Baptist” alliance.

Regulatory economist Bruce Yandle, a former executive director for the Federal Trade Commission, developed this theory that argues entities and individuals of the opposite beliefs work toward common policy goals, legislation, and regulatory interests. The Master Settlement Agreement (MSA) between the country’s Attorneys General and big tobacco reached in 1998 is quite possibly one of the best examples of this political model.

Hysteria While the Proof Is There

Minton’s research is part of a growing academic body of work that speaks to the benefits of vaping and e-cigarette use as an alternative to smoking. It is safe to argue that the research surrounding e-cigarettes positions vaping as means to push cessation. In the United States at least, the argument among tobacco control advocates and the FDA is that heavily regulating e-cigarettes and related products will help end use among the country’s youth. Gottlieb, in fact, claimed that vaping among high schoolers in the United States has reached epidemic proportions, ultimately treating youth use as the country’s next opioid epidemic.

According to federal data, however, there is extremely limited evidence of any “epidemic.” Data from the Centers for Disease Control and Prevention (CDC) actually suggests that vaping among high school students has remained stable and serves as a passing fad. Most of the teens who responded to the CDC survey aren’t regular smokers.

Instead of fearmongering about a small population that may pick up smoking through e-cigarette use, the anti-tobacco groups should consider the long-term harm-reduction possibilities presented by e-cigarettes. As it stands, these anti-tobacco groups are playing into the hands of corporate interests and spending millions of dollars to prevent smokers from buying safer alternatives.

Michael McGrady is a libertarian journalist and the executive director of McGrady Policy Research & Public Affairs. His work has been published, and/or cited by the Wall Street Journal, South…
+ More by Michael McGrady