The Moral Majority of the Left? 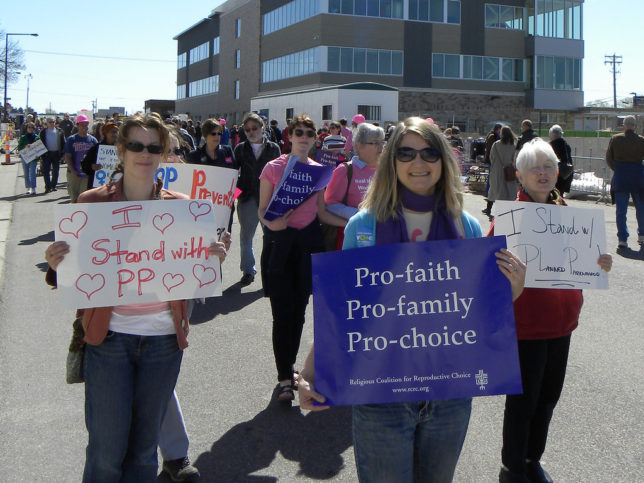 Is there a “Moral Majority” on the Left? If you ask the pro-abortion activists at the Religious Coalition for Reproductive Choice, there is—and they’re preaching “the moral case” for abortion.

The Religious Coalition is one of the chief “interfaith” groups pushing increasingly radical abortion policies as a religious imperative. Since the late 1960s, this Washington, D.C.-based network of left-wing Protestant, Roman Catholic, and Jewish groups has trumpeted unfettered abortion access, gay marriage, mandatory sex education, subsidized abortion for illegal immigrants, and environmentalism under the veneer of “faith.”

If that sounds suspiciously like the activism of Planned Parenthood or NARAL Pro-Choice, it is. “Thank God for abortion providers” may be the group’s rallying cry, but the Religious Coalition for Reproductive Choice’s message isn’t liberal Judaism or Christianity—it’s true-blue leftism.

The group itself is largely composed of mainline liberal churches and Jewish groups, such as the Unitarian Universalist Church, Presbyterian Church (USA), Lutheran Women’s Caucus, Union for Reform Judaism, and Catholics for Choice. For over 40 years, that list included representative groups from the United Methodist Church, whose 2016 General Conference voted to leave the Coalition, citing the growth in international influence of “more evangelical and orthodox” African United Methodists, a group that has generally opposed the liberal views of many American Methodist groups.

The Religious Coalition was created in the late 1960s with startup funding from the Playboy Foundation, a now-defunct foundation associated with Hugh Hefner’s Playboy adult media empire. Since 1999, the group has received over $28 million in grants from major funders on the Left, including the Susan Thompson Buffett Foundation, Ford Foundation, and George Soros’s Open Society Foundations.

Today the group acts as a bridge between the radical pro-abortion Left and liberal religious groups. The Religious Coalition for Reproductive Choice publishes materials which lather secular, pro-abortion messages with Judeo-Christian terms, such as prayers for God’s blessings upon individual abortions and “Earth-centered” meditations addressed to one “Ancient Mother.”

The coalition takes an especially bizarre (and unbiblical) approach to sex and sexuality, going so far as to champion “sexuality [as] a sacred gift” that “make[s] us human” and lambasting abstinence-until-marriage. Religious Coalition for Reproductive Choice members regularly appear in pro-abortion protests where clergy “bless” abortion clinics, claiming that “all that they do is for Thy glory.”

But the coalition’s bread and butter is politics. Among its many claims of “advocacy action,” the Coalition brags about opposing the nomination of conservative Justices Samuel Alito and John Roberts to the U.S. Supreme Court, pushing for public funding of abortion (which it deems a “right”), and defeating abortion restrictions in multiple states. The Coalition also urged the Obama administration to enact a “path to citizenship” for illegal immigrants.

Last fall, the coalition smeared U.S. District Court judge Thomas Farr during his confirmation process, claiming that he “has actively worked to suppress the votes of people of color in North Carolina.” They attacked Trump Supreme Court nominee Brett Kavanaugh, too, saying that he “will put vital civil and human rights . . . in jeopardy” if confirmed. The Religious Coalition for Reproductive Choice  is among the left-wing groups pushing committees in the U.S. House of Representatives to investigate what it calls Kavanaugh’s “sham confirmation process.”

One of the Religious Coalition for Reproductive Choice’s chief targets is the Hyde Amendment, a 1976 ban on federal funding of abortions except in extreme circumstances; a cause it shares with allies like Planned Parenthood and Center for Reproductive Rights. In 2016, the coalition signed a letter alongside dozens of professional activist groups urging President Obama to “eliminate all abortion coverage restrictions” in his annual budget proposal.

The Religious Coalition is well-connected to the professional Left. It was a member of Health Care for America Now, a “dark money” advocacy campaign created in 2007 to coordinate the Left’s efforts to pass Obamacare. It spent over $47 million on the effort between 2008 and the law’s passage in 2010.

The Religious Coalition for Reproductive Choice’s leadership further illustrates those connections. One of the group’s executives, Lisa Weiner-Mahfuz, is a “social justice” consultant who previously worked for the National LGBTQ Task Force and National Organization for Women.

Harry Knox, president and CEO of the coalition, is a professional activist from various gay marriage campaigns. Knox was founding director for the religion and faith program of the Human Rights Campaign, program director for Freedom to Marry, and a staffer for gay marriage campaigns in Florida and Georgia. Knox was appointed by Obama in 2015 to the White House’s Advisory Council on Faith-Based and Neighborhood Partnerships.

Knox’s predecessor, Carlton Veazey, held similar views. In 2005, Veazey accused the Bush administration and conservative Christians of attempting to turn the U.S. into a “theocracy,” writing:

The nation is not yet a theocracy, if mullah-run Iran or Taliban-controlled Afghanistan is the standard. But after four years of unprecedented access, far-right Christian fundamentalists are deeply embedded in government structures and ready to call the shots over the biggest prize, the U. S. Supreme Court. We are on the brink of a de-facto Christian state, and we should be very frightened for the future of religious freedom and diversity [emphasis added].

Worth noting is Veazey’s speedy removal from his position as longtime pastor of Zion Baptist Church in Washington, D.C., following accusations of faking a coronary and “consort[ing] with women not his wife.”

He isn’t the only Coalition leader to face accusations of sexual misconduct. In March, the group’s vice chair, abortion provider Willie Parker, resigned from his position after he was accused of raping Candice Russell, an abortion activist with the National Network of Abortion Funds and a board member for NARAL Pro-Choice Texas.

According to the 1984 book Persuasion and Social Movements, the Religious Coalition for Reproductive Choice has attacked pro-life advocates as “terrorists cut from the same cloth as KKK night riders who used terror to stop African-American citizens from exercising their right to vote.”

As many Christians and Jews have discovered, the Left is fully capable of using the Bible to support unbiblical positions. But God is entirely absent from the Religious Coalition’s infanticidal message. Like so many left-wing “faith” groups before it, the coalition is religious on the surface and “Progressive” to the bone.