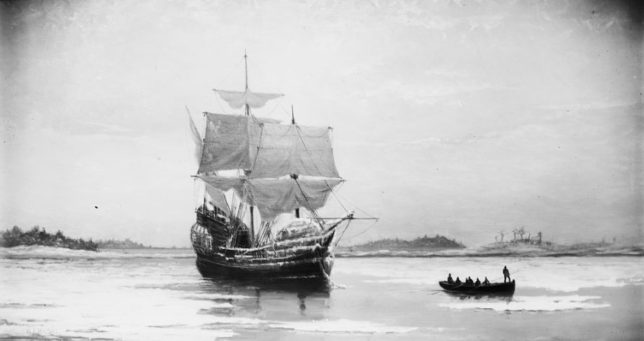 On this Thanksgiving Day, we celebrate the blessings of the previous year and commemorate the first thanksgiving feast in 1621 shared by the Pilgrims and the Wampanoag, who helped the Pilgrims survive their first winter in the New World.

As much as my taste buds appreciate our reenactments of the first Thanksgiving, I am more grateful to Pilgrims for the Mayflower Compact—a small, largely unknown document that many consider the first founding document of the American Experiment.

The Pilgrims had originally been granted permission to settle near the mouth of the Hudson River, then on the northern border of Virginia. However, because of rough seas, they eventually anchored the Mayflower in Provincetown Harbor (modern-day Massachusetts) on November 21, 1620 (Old Style: November 11), well outside the terms of their contract with the royally chartered Virginia Company.

Finding themselves outside established law, the adult men drafted and signed an agreement on how they would govern themselves, which became known as the Mayflower Compact.

The following photo of the compact is of the compact as it was recorded in Gov. William Bradford’s history Of Plymouth Plantation, followed by a line-by-line transcription:

In ye name of God Amen· We whose names are vnderwriten,
the loyall subjects of our dread soueraigne Lord King James
by ye grace of God, of great Britaine, franc, & Ireland king,
defender of ye faith, &c

Haueing vndertaken, for ye glorie of God, and aduancemente
of ye christian ^faith and honour of our king & countrie, a voyage to
plant ye first colonie in ye Northerne parts of Virginia· doe
by these presents solemnly & mutualy in ye presence of God, and
one of another, couenant, & combine our selues togeather into a
ciuill body politick; for ye our better ordering, & preseruation & fur=
therance of ye ends aforesaid; and by vertue hearof, to enacte,
constitute, and frame shuch just & equall lawes, ordinances,
Acts, constitutions, & offices, from time to time, as shall be thought
most meete & conuenient for ye generall good of ye colonie:  vnto
which we promise all due submission and obedience.  In witnes
wherof we haue herevnder subscribed our names at Cap=
Codd ye ·11· of Nouember, in ye year of ye raigne of our soueraigne
Lord king James of England, france, & Ireland ye eighteenth
and of Scotland ye fiftie fourth. Ano: Dom ·1620·|

The covenant to “enacte, constitute, and frame shuch just & equall lawes, ordinances, Acts, constitutions, & office” is quite simple and mundane by today’s standards. While not remotely as revolutionary as the Declaration of Independence, it does evince a clear desire and willingness to govern themselves, albeit still acknowledging the king of England as their sovereign.

This small step away from monarchy was arguably the first step toward the “shot heard around the world” and all that followed.