The Marxist Media Analysis of the Center for American Progress 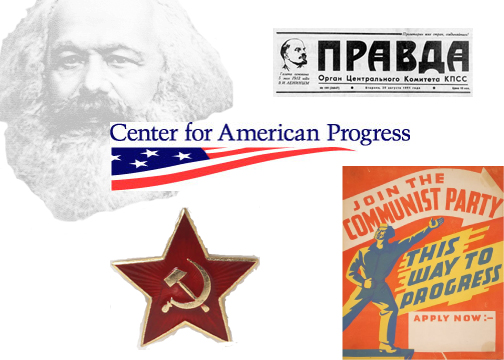 Whenever Dr. David Madland of the Center for American Progress writes, Karl Marx must look up from the fiery torments of Hell and smile.

According to Madland, director of the American Worker Project at the Center for American Progress (CAP), American media outlets should revert to the Soviet era, routinely churning out tedious Pravda-style articles about how heroic workers received the Order of Lenin for selflessly boosting the nation’s industrial production.

Exaggeration? Perhaps, but CAP is making the extraordinary claim that workers don’t get a fair shake from journalists. CAP, a liberal “action tank” whose stated aim is to “expose the hollowness of conservative governing philosophy, and challenge the media to cover the issues that truly matter,” has decided to bring Marxist class warfare to its media bias research.

In Madland’s recent study, “Journalists Give Workers the Business: How the Mainstream Media Ignores Ordinary People in Economic News Coverage,” he argues that the views of workers are ignored by the capitalism-loving mainstream media. He found that “the perspective of workers is largely missing from media coverage, while the views of business are frequently presented.”

The study examined 480 news reports about employment, the minimum wage, trade, and credit card debt. Those economic issues “were chosen because they represent a range of economic issues that impact ordinary citizens and that many citizens have defined opinions about.” The reports appeared in the Los Angeles Times, the New York Times, USA Today, Wall Street Journal, the Washington Post, ABC News, CBS News, NBC News, CNN, FOX News, and CNBC in 2007.

Among the study’s findings were the following:

The study also noted that “many papers have eliminated a dedicated labor beat, meaning that there are fewer reporters who focus specifically on organized labor and workers.”

But these findings count for little because the Marxist framework that CAP now uses for its media content analysis doesn’t make sense. News-gathering is not an extension of the class struggle and journalistic fairness doesn’t require focusing equally on capital and labor. America is not seething with worker unrest and capitalist oppression.

Businesses -small, medium and large- simply produce more news. The capacity of businesses for taking on an endless variety of tasks and ventures helps them generate more news. Unions perform fewer functions. They are largely focused on negotiating contracts and organizing workers, and they simply don’t do as many newsworthy things.

The ultimate goal of CAP’s quest for “balanced” media is equal sourcing of business and unions even though union influence decreases daily. Union members account for just 12.1% percent of employed wage and salary workers, down dramatically from 20.1% in 1983. (In the public sector, 35.9% of workers are unionized versus just 7.5% of workers in private industry.)

CAP’s desire for 50/50 sourcing is as unnecessary as it is wrong.

Another left-wing group, Media Matters for America, which was jump-started by the Center for American Progress and with millions in dollars from wealthy liberals, last year “discovered” new evidence of conservative bias in the news media. The George Soros-funded group’s study, “Black and White and Re(a)d All Over,” asserts that there are more conservative than liberal op-ed columns in American newspapers. Of course, op-ed columnists have little, if anything, to do with bias in the media. They’re writing pieces that readers understand are opinion-based commentary.

And as Jonah Goldberg points out on National Review Online’s blog, The Corner:

It’s also worth pointing out that op-ed columnists are often selected as an alternative perspective to the editorials of the paper itself. Not that I would wholly trust Media Matters’ accounting,* but it’d be interesting to know what the breakdown of liberal to conservative editorial boards is. Also, not all newspapers are equal. With the exceptions of the Wall Street Journal and the New York Post, I’m hard pressed to think of a top 20 newspaper that isn’t liberal editorially.

The American people know that the media is biased to the left. A poll conducted by Zogby International in February 2007 asked approximately 1,800 consumers of news about bias in the mainstream media. A vast majority of respondents, 64%, detected a liberal bias in the media, while only 28% believe there is a conservative bias. This poll joins a large and growing body of evidence that support the idea that the mainstream media is skewed left.

(Capital Research Center intern Matthew Hallam conceived of this article and conducted research on which it is based. Cross-posted at NewsBusters.)