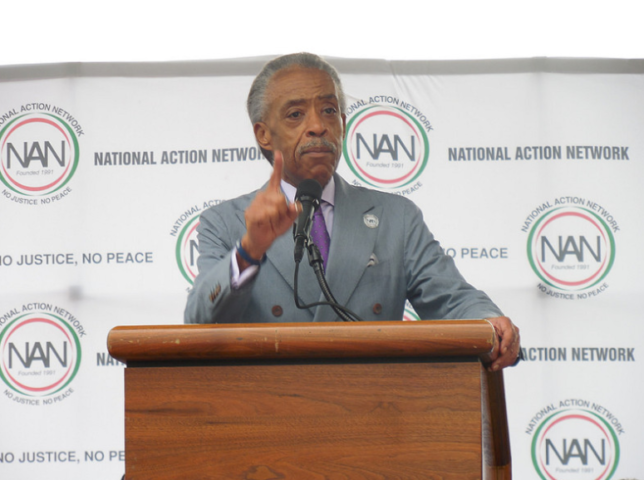 Whatever his associations may or may not have been with shady businesses, the National Action Network (NAN) is Sharpton’s supposedly legitimate enterprise.

It’s the civil rights organization that commanded respect and personal appearances from the last Democratic President and his administration.

It’s the organization that now induces groveling from most of those hoping to be the next Democratic President.

It’s the organization Nancy Pelosi says Sharpton used to “save” America in 2018.

And it has been a hot mess of financial controversies for decades.

Among the assets tossed in with his life story was reportedly video footage of Sharpton with Michael Jackson, an ironic reminder that the late pop superstar’s 1984 concert tour was but one of many alleged targets of Sharpton’s predatory fundraising model.

There is also Robert Curington’s description of his work with Sharpton, as told by TSG:

Curington said that he worked closely with the activist when Sharpton was “young and stupid and broke” and seeking to pressure large music labels and concert promoters into spending more money in the black community. Sharpton threatened to organize pickets and boycotts unless a target handed over money—usually in the form of a contribution to the National Youth Movement, the predecessor organization to Sharpton’s National Action Network. Sometimes, a block of concert tickets could also quash a protest.

Similarly, a 2008 New York Post report was titled “Rev. Al Soaks Up Boycott Bucks.” It noted NAN’s many big-name corporate sponsors (among them Pepsi, GM, Anheuser-Busch, and Walmart), but then explained some difficult coincidences:

When the Post asked the reverend to address the suspicions, Sharpton blamed “anti-civil-rights forces” for spreading the “shakedown theory.”

And yet the Post noted that the year after Walmart began sponsoring NAN, the Rev. Jesse Jackson accused the retail giant of attempting to silence critics by throwing money at them.

The Rev. Jackson is many things, but probably not a stooge for what Sharpton called “anti-civil-rights forces.” Indeed, showing a crystal-clear understanding of who Jackson was talking about, Sharpton retorted: “Walmart has in no way tried to persuade me with money.”

Sharpton also challenged the Post reporter to find one of NAN’s corporate donors who was accusing him of shakedowns, as if the lack of complaints equals innocence.

It’s an argument that fails the Tommy Lucchese test.

The original godfather of the Lucchese crime family, Tommy ran a window washing business when he was a young man. His sales pitch to local merchants was very effective: The windows we wash never get broken! And sure enough, the local vandals … ahem … whoever they were … seemed to coincidentally never break the windows Tommy’s boys had cleaned. The fee was worth the peace. To anyone who asked, Tommy’s customers all raved about how pretty their windows looked.

Organized crime figures engage in shakedown scams directed at innocent victims. They also bleed their own supposedly legitimate enterprises dry with self-serving spending irregularities and lavish living. And they are notorious for cheating on their taxes.

Up until now our political media has mostly failed with regards to politicians cozying up to Sharpton. They’ve largely granted a free photo op and plush media placements for those who crave Sharpton’s attention. That’s as lazy as it is harmful.

The free pass should end. Politicians seeking Sharpton’s praises should be pestered with questions about the serious and convincing allegations regarding the reverend and the criminal underworld. They should also answer for his ongoing business affairs that so coincidentally resemble the irregularities of the gangsters with whom he claims not to have been associated.

The Speaker of the House said this man saved America. If he’s that important, then she and others like her need to answer some hard questions about who he really is.