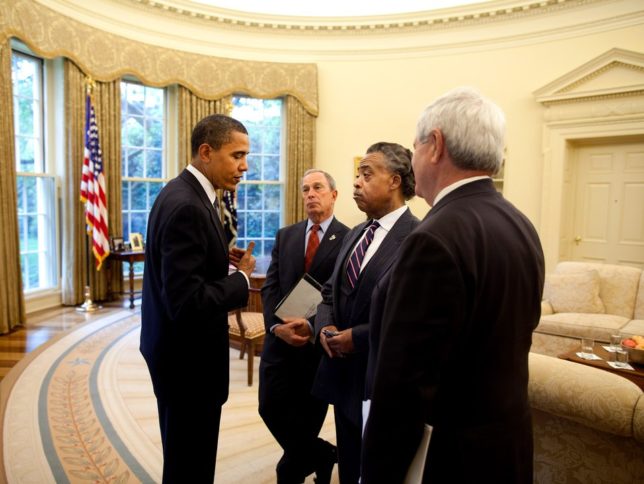 Sometime in the early 1980s, another mysterious twist of entrepreneurial fate placed Sharpton in a room discussing whether or not he would be purchasing cocaine for an unnamed acquaintance. On videotapes surreptitiously recorded by the FBI, an apparent high-end drug dealer named Victor Quintana offered Sharpton a 10 percent commission for facilitating the purchase of several kilos of “pure coke,” and the Rev. Sharpton—supposedly a preacher since before he learned to read—stipulated to Quintana that his associate would want “much more than that” if terms could be reached.

“Mr. Quintana” was really an undercover FBI agent hoping to worm his way into a relationship with Joseph Pagano, who the TSG investigation reveals as an acquaintance of Sharpton and a Genovese family associate. The FBI videotaped Sharpton’s tryout as a recreational pharmaceutical salesman.

The federal agents confessed to TSG they probably could not have convicted Sharpton from what they had on the video. But they were confident Sharpton didn’t know this, so they confronted him with their evidence (such as it was) and implied they would prosecute him if he didn’t cooperate. According to the agents, Sharpton didn’t even consult a lawyer, and “flipped”—agreeing to work with them to avoid prosecution.

There is the marvelous irony of the man accused of shaking down Michael Jackson himself getting bluffed into cooperating with the FBI to save his own hide. It should come as no surprise that Sharpton has a more “nuanced” explanation.

Speaking with Vanity Fair in 2016, Sharpton conceded the drug deal negotiations caught on the video occurred, but he never thought himself in legal jeopardy: “They tried to entrap me on tape—and by their admission, they didn’t—to commit a crime.” In his interview with TSG, Sharpton claims a lawyer did advise him of his strong legal position, but he wouldn’t name the lawyer.

According to the New York Observer, a defiant Sharpton admitted to taping conversations for law enforcement, though not as a “rat,” but instead as part of some heroic role as a crime fighter: “I wasn’t with the rats. I’m a cat. I chase rats.”

Whether one believes Sharpton or the FBI agents and the legal paperwork unearthed by TSG, the rest of what TSG reveals portrays the reverend—aka: “confidential informant number seven”—to have been a peculiarly well-placed asset for the government.

In early debriefings, before sending Sharpton out to secretly record FBI targets, the FBI discovered just how useful he would become. They already knew about his alleged connections to Joseph Pagano (through Sharpton’s friendship with Pagano’s son, Daniel, also a reputed underworld figure), but then they discovered his relationship with Robert Curington.

According to TSG, Curington received a two-year federal prison sentence in 1978 on a narcotics-related charge, and was professionally connected to an alleged Gambino crime family figure named Joseph Buonanno.

In Curington’s telling, he was also the “vice president of industrial affairs” for the National Youth Movement (predecessor to Sharpton’s National Action Network). The business model back then was to persuade concert and music promoters—under threat of pickets and boycotts from Sharpton—to spend more in the black community. As with the Michael Jackson tour arrangement, the TSG/Curington account says this often translated into contributions to Sharpton’s organizations.

Either Curington or Daniel Pagano would introduce Sharpton (now carrying recording equipment for the FBI) to Joseph Buonanno of the Gambino crime clan. Another mysterious twist: multiple crime figures disputing who exactly it was that introduced the reverend to yet another crook. TSG notes Curington claims credit, but that “several” Genovese family members argue it was Daniel Pagano.

In any case, the FBI really wanted to get Buonanno talking, and Sharpton delivered. Buonanno gabbed on and on about all manner of murder plots, crookedness, and wickedness committed from within both his own crime family and the Genoveses.

The details would give the government probable cause to obtain wiretap authorizations for many suspects, among them the legendary “Oddfather”—Genovese boss Vincent “The Chin” Gigante—and top men in his organization. Gigante had eluded suspicion of involvement as a mob boss for many years by pretending to be senile, and forbidding mobsters within his own family and others from even mentioning his name out loud—under penalty of death. This helped keep Gigante’s involvement hidden should law enforcement happen to be listening.

No matter: Buonanno, with the tape rolling, told Sharpton all about “the Chin” and the Genoveses. The resulting evidence even led to the tapping of phones at the residence of Gigante’s mistress—Olympia Esposito—who is not to be confused with Olympia Gigante, Vincent’s wife. The many wiretaps led to indictments and guilty pleas of several mob suspects.

Organized crime figures have often remarked on the similarity between their line of work and that of politicians. On turning against Gambino boss John Gotti in 1991, Sammy “The Bull” Gravano announced to law enforcement: “I want to switch governments.” Lucky Luciano once described the purpose of government as organizing “public virtues,” while his job was to do similarly with “private vices.”

TSG reports some in the law enforcement task force as being amazed at how easily Sharpton established such a trusting relationship with Buonanno.

But was it so surprising he could succeed in smooth-talking a gangster, when sometime within the year after the TSG report Sharpton would rack up his 61st visit to the Obama White House?

Or, when two years earlier, the U.S. Attorney General was praising Sharpton in a speech reproduced and still posted on the U.S. Department of Justice website?

Once upon a time the White House was a hard place for Sharpton to get into. The secret taping of Buonanno occurred alongside Sharpton’s convoluted business arrangement with the Michael Jackson tour, which included a visit by Jackson to meet President Reagan. The investigators speaking with TSG couldn’t recall how (or whether) they prevented Sharpton from tagging along, but did recall great discomfort at the notion of letting an active confidential informant bounce around in the White House.

The TSG report shows Sharpton to be so close to the gangster that the Reverend was receiving favors from him.

In 1984, as he was befriending and betraying Buonanno to the FBI as a paid informant, TSG says he borrowed money from the reputed mobster so as to travel with the Jackson tour.

And as late as 1988, according to an Englewood, N.J., police officer quoted by TSG, Buonanno acted as an enforcer to help both Sharpton and Curington collect a debt allegedly owed to them from a multi-million-dollar record deal gone bad. The officer was called to the scene by a studio owner claiming he was being hassled, and found Buonanno who “didn’t look like” the sort of person the detective expected to find at a rapper’s studio. TSG reproduces a letter sent by Sharpton to the officer, detailing his (and Curington’s) version of the dispute.

Sharpton told TSG he had no recollection of sending the letter nor of any enforcers sent to the studio, while Curington told TSG that he—along with Buonanno, Daniel Pagano, and one other man—did indeed make the menacing visit.

In October 2013, James “Jimmy Henchman” Rosemond was sentenced to life in prison for cocaine trafficking. Rosemond was then best known as a hip-hop music mogul, but the U.S. Attorney supervising the case, Loretta Lynch, declared the music business a cover story for a mere “thug in a suit.” (Ms. Lynch would later be named U.S. Attorney General by President Obama.)

During Rosemond’s trial in 2012, court transcripts posted by TSG report at least two allegations of business dealings between Sharpton and the so-called “thug in a suit.” The defendant himself told an investigator he had given a $10,000 contribution to Sharpton (a donation the reverend could not remember, according to the New York Post). Another witness stated that in 2009 Henchman unsuccessfully attempted to help Sharpton secure a place as host of a “Judge Judy”-style TV show. The TV show assistance reportedly included paid travel expenses for a trip to Los Angeles.

In the conclusion of The Left’s Street Boss, learn how Sharpton’s organization, the National Action Network, helped him earn his reputation as a Democratic kingmaker.