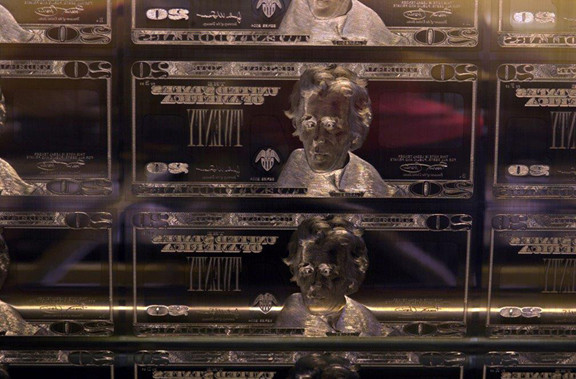 A $20 engraved plate. Credit: U.S. Department of the Treasury, Bureau of Engraving and Printing.
by Sarah Lee

Back in 2018, the left-leaning think tank Brennan Center for Justice wrung its hands over the possibility that Democrats might begin to embrace super PACs leading into the 2020 election, calling such a move hypocritical and lamenting that the super PAC path was the purview of the GOP, “a party untroubled by any ideological commitment to campaign reform.”

Well the future is now: The Brennan Center’s prediction has come to pass as The Hill reports in the run up to the 2020 election that “liberals embrace super PACS they once shunned.”

The Reality of Leftist “Principles”

The general narrative is that liberals are extremely disappointed they’ve had to sink so low as to embrace the fundraising tool they railed against for years during the Citizens United fight, demonizing the notion of “money in politics” as the root of all evil.

But they’ve been left with no choice because the 2020 election is just that important. As The Hill reports, “the decision to form a super PAC appears to stem more from a sense of urgency than a genuine comfort with such groups, which can raise and spend unlimited amounts of money so long as they do not coordinate with a candidate or campaign.

In a memo issued on Friday, [Biden campaign senior advisor Jeff] Weaver warned that lagging support and enthusiasm for Biden’s candidacy among progressives could sink the former vice president’s chances of ousting President Donald Trump in November. America’s Promise PAC, he wrote, could help Biden “make up that ground.”

They’ll hold their noses and do it to win, they seem to be saying.

Actually, the future was long ago. As Capital Research Center pointed out in 2018 the Left’s interest in super PACs is neither a new phenomenon nor particularly alarming. It’s not alarming because super PACs aren’t the cause of all problems in politics as the Left has repeatedly insisted. Nor is the political donation apparatus the nefarious thing suggested by the Left’s preferred term of art: “dark money.”

CRC’s Michael Hartmann wrote in 2019 that the etymology of the word “dark money”—the pejorative term used to describe super PAC donations—stemmed from the Sunlight Foundation’s attempt to categorize “outside organizations” that are tax exempt under Section 501(c)(4) of the Internal Revenue Code:

These “social welfare” groups are permitted to engage in partisan political campaign activity and lobbying, as long as it’s not their “primary” purpose or activity. And when these groups spend money on politics, they report that spending to the FEC. But Sunlight was unhappy with the fact that (c)(4) groups do not have to publicly report who originally gave them the money. The identity of those donors remains private.

Hence the adjective in “dark money.”

So the term was designed to give a negative connotation rather than accurately describe the donations themselves. More to the point, Hartmann notes, some “lonely liberals,” eager to not shoot themselves in the foot post-Citizens United, even offered early and open support for super PACS:

They knew that their side uses and will want to keep using the same type of funding. There “is a very real risk that if donors on the left become squeamish about supporting new 501(c)(4)s, the progressive community will lose the huge advantages of social-welfare organizations in the era of Trump, the worst possible time to sacrifice any tool in the toolbox,” wrote the Alliance for Justice’s Nan Aron and Abby Levine in 2017.

Frankly, this makes The Hill’s reporting—and anyone suggesting Democrats weren’t always going to make use of the newest tool in the fundraising toolbox—little more than old news repackage as a public relations push to help candidates once critical of super PACs embrace them without criticism. The desperation is so great even the guillotine must be rolled out to the public square.

But the truth is simpler: Liberals have always embraced super PACs. They just weren’t eager to admit it when conservatives were using them to great effect. The new narrative of last resort gives them cover and helps them avoid, as the Brennan Center rightly acknowledged two years ago, looking like a bunch of hypocrites.