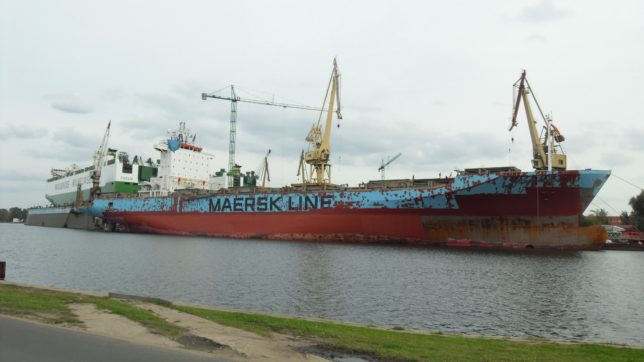 A strange thing happened on December 6th, 2018, when President Donald Trump signed a waiver that allowed the American business, Fishermen’s Finest, to sail its 80.5-meter fishing boat, America’s Finest, out of a Washington State shipyard over objections from special interest labor unions and trade associations. The ship was held in the harbor because its hull was made with too much Dutch steel.

This violated the century-old protectionist law, the Jones Act, a little-known law passed in 1920. Even many of those who are hurt by it are unfamiliar with how this cumbersome law that likely costs the American economy millions of dollars every year. Simply put, the Jones Act demands that any merchant ship that is trading between two U.S. ports must be an American ship, made in America, and manned with an American crew (defined as consisting of at least 75 percent of U.S. citizens).

Technically, the Jones Act deals with “cabotage,” meaning the power of a government to decide who can transport people or objects within the country. The Jones Act sets regulations on cabotage between U.S. shipping ports and secures privileges for groups who have been granted exclusive access to all domestic maritime shipping by the U.S. government. A small handful of U.S. corporations benefit from this law.

But labor unions also have a vested interest in the Jones Act.  Since compliance with the Jones Act states that ships traveling between U.S. ports must be built within the U.S., using (mostly) U.S. products, with a U.S. crew, then it shouldn’t surprise anyone that American labor unions want to continue their monopoly on the maritime shipping labor market. These requirements also subsidize other union interests in the steel and shipbuilding industries.

Labor unions like the Seafarers International Union of North America (SIUNA) (a member union of the the AFL-CIO) and other special interests like the American Maritime Congress and the American Maritime Partnership claim the law is crucial for national defense. The economic costs are very clear: it is six to eight times more expensive to build a U.S. ship! But there are other concerns beyond cost to consider. That’s why these special interests appeal to two factors affecting national security.

First, Jones Act proponents believe that the U.S. is at risk when foreign sea powers can regularly travel between U.S. ports. Second, the law is meant to ensure that U.S. civilian ships are available in case of a naval invasion.

The Jones Act supposedly ensures that the country has enough ships to form a strong merchant fleet, which would be essential in the event of a naval blockade or embargo from an opposing nation. It also limits the threat of invasion by a foreign power by ensuring all port-to-port sea traffic in the United States is directed by Americans.

According to proponents, thanks to this law, the Dutch could now only conduct a naval invasion of the U.S. directly from their own ports, and when that happens, we’ll have the SIUNA to thank for protecting American waters.

However, this appeal to national security falls short.

The U.S. only produces a small number of ships with American-produced steel. Over the past decade, the U.S. has consistently produced low, single-digit numbers of Jones Act-approved ships annually, typically ranging from zero to only as high as six. These U.S. ships aren’t being replaced fast enough either, so the whole of the U.S. commercial fleet is steadily aging.

Since it is illegal to use anything other than these overpriced and under-supplied boats, the Jones Act artificially inflates demand for American ships, and makes transportation universally more expensive. Producers of consumer products—particularly smaller companies—must cut costs by congesting coastal roads and railways or shipping goods via airplane to avoid exclusion from the market altogether. (This leads to ridiculous work-arounds, perhaps best illustrated by one farmer who transports his cattle by plane from Hawaii to the west coast.) Ultimately this raises the price of whatever is being sold to consumers, assuming the product can even get to the market.

This was a particularly salient issue for Puerto Rico after Hurricane Maria hit the island in September 2017, when the devastated U.S. territory needed supplies. But special interests would only allow American-made ships to arrive from the U.S. This severely hindered the recovery efforts. The pro-Jones Act lobby blamed Puerto Rican ports and suggested the country was, in fact, receiving enough aid from Jones Act-approved ships. This has been categorically disproven by independent studies. President Trump issued a temporary waiver after the hurricane, a tacit concession that in tough times the nation cannot afford the Jones Act. Nevertheless, the Jones Act persists and disproportionately harms non-contiguous U.S. land (Alaska, Hawaii, and the insular territories not exempt from the Jones Act), leaving such places at the mercy of union and trade association interests.

So, who are these special interests really? American Maritime Partnership, formerly known as the Maritime Cabotage Task Force, was the main lobbyist against the late U.S. Sen. John McCain’s (R-Arizona) efforts to repeal the Jones Act in 2015; this group has continued to be an active and powerful voice for this law. According to its website, the partnership includes the shipping industry corporations who have personally prospered from the rent-seeking status quo: U.S. Shipping Corporation, American Petroleum Tankers, and the Dredging Contractors of America are just a few. Since 2013, the group has paid nearly $5.6 million  to  K&L Gates, a law firm and lobbying shop which currently employs 15 lobbyists to push the Jones Act on behalf of the American Maritime Partnership. Furthermore, the American Maritime Congress, which also has actively lobbied congress for years, includes transportation corporations like Crowley, Cargotec, and the U.S. flag transportation fleet company Maersk Line, Limited (MLL).

And that brings us back to the story of the President and the fishing boat. One group which has actively advocated for keeping the Jones Act, on the premise that great ships can be built affordably within the U.S., is Fishermen’s Finest. It went  so far as to announce plans in 2016 to build a new 80.5-meter fishing boat. Not long after, the group completed its newest ship, America’s Finest.

The Jones Act has a unique way of creating strange allies, whether by uniting both unions and corporations to protect their exclusive access to the U.S. domestic shipping market, or by uniting the left-wing economist and New York Times columnist Paul Krugman with Republicans like the late Senator John McCain in opposition. President Trump, despite his reputation as a “Tariff Man” and a vocal advocate for domestic manufacturing and protectionist trade policies, has illustrated with waivers to the Jones Act that the maritime industry doesn’t need special treatment. Hopefully this trend continues, and the American people can see the end of this law that has served so few at the expense of so many.