The Gurus Behind The Left’s “Wealth Inequality” Talking Point 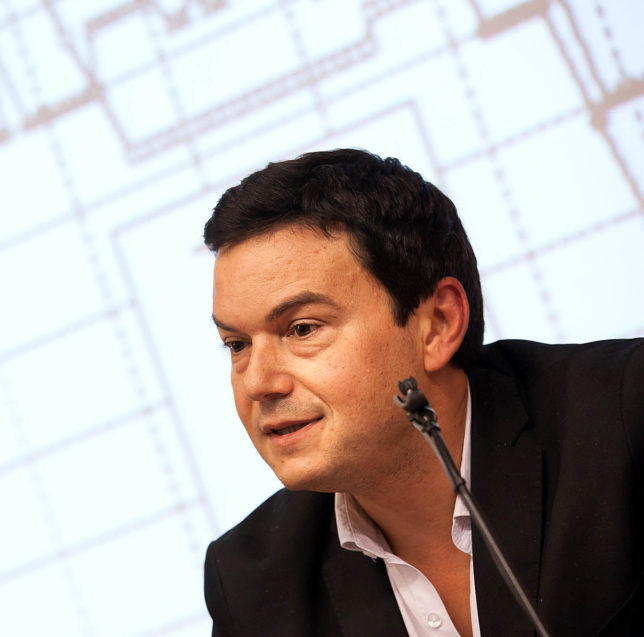 French economist Thomas Piketty has wielded substantial influence over the global conversation between progressives in the field of economics ever since the publication of his book Capital in the Twenty-First Century in 2013. His basic thesis: ever since roughly 1975, especially in the United States, wealth has become increasingly concentrated among the richest members of society, leading us back to a social state not seen since the Gilded Age. Piketty maintains that inequality stems from capitalism itself, and it can only be thwarted using government power via taxation. According to Piketty, when classes become stratified, the economy becomes weaker, everything becomes polarized, and the political order tends to decay.

Piketty proposes a solution of a global wealth tax that would tax the net wealth of those worth $50 million or more. Since this would be a global tax, wealthy individuals would no longer be able to hide their money in offshore accounts. “Reaganism has shown its limits: Growth has been halved, inequalities have doubled. It is time to break out of this phase of sacredness of property. To overcome capitalism,” Piketty said.

The Center for American Progress, a highly influential left-of-center policy research group in the U.S., cites Piketty and his fellow socialist economics scholars Emmanuel Saez and Gabriel Zucman (his former student) in multiple reports, including in one posted as recently as August 2019. Saez and Zucman are just as important as Piketty in the proliferation of the rhetoric of “wealth inequality”: progressives often cite their paper as a shorthand to show the year-over-year trends that Piketty discusses at length.

When the Center for American Progress cites their work, the group promotes it as data-backed evidence providing a basis for every subsequent claim (and rant) about wealth inequality and our unfair economic situation. For left-wing nonprofits and policymakers, wealth inequality serves as a justification for steep, “confiscatory” (Piketty’s term) taxes that will drive the governmental engine that would be required of a progressive presidential administration seeking to implement policies like the Green New Deal, tuition-free college, and Medicare For All.

Richard Wolff, a professor of economics at The New School and founder of the academic journal Rethinking Marxism, owns and operates a think tank known as Democracy at Work, which has sung the praises of Piketty numerous times. Wolff has expressed his deep admiration for Piketty—along with Piketty’s colleagues Saez and Zucman, whom he references in many of his lectures available on YouTube.

Demos, the progressive nonprofit formerly chaired by Elizabeth Warren’s daughter Amelia Tyagi Warren, believes that we need to be “rethinking American capitalism” and consider the real possibility that large-scale changes to the structure of the U.S. economy are needed in order to achieve a “sustainable, just, and democratic future.” It should come as no surprise that Demos’s leadership and staff are fans of Piketty, having criticized former President Barack Obama for not leaning left enough in the rhetoric used in one of his State of the Union addresses, one which they also argued clearly influenced by Piketty’s work. In June 2014, Demos reposted an article by Sean McElwee (now of Twitter and #Resistance fame, at one point having gone by the username “we’re going to abolish ICE”) which lauds Elizabeth Warren and Piketty for tireless efforts to spread the notion that we live in a period of extraordinary wealth inequality partly manifesting itself in credit card debt.

In 2014, Sen. Elizabeth Warren (D-MA) was joined by Piketty on stage to talk about wealth inequality. Currently, both Warren’s and Sanders’ presidential campaigns are being advised from the outside by Saez and Zucman. Bharat Ramamurti, Elizabeth Warren’s economic policy adviser, contacted Saez for help on designing her policy on a wealth tax. Saez worked with Zucman to create a spreadsheet to show Warren’s team the various options she would have, and they wrote a letter to her which she later uploaded to her website. Warren’s team has decided to pursue a wealth tax that would only apply to those making over $50 million annually. Her campaign website explains:

To drive home the point that Zucman and Saez are influencing (or at least providing post-hoc excuses for) Warren’s policies, the entire web page on economics plans and her wealth tax, not just this excerpt, is filled with graphs, references, and links to Saez and Zucman’s work, grounding her whole economic platform in their research.

Brookings Institution, certainly not as fringe as professor Wolff’s Democracy at Work, also takes kindly to Saez and Zucman, having published them before and commonly writing articles about the academics. Brookings even invited Saez and Zucman to present a paper on the wealth tax with a focus on how the government would go about putting a wealth tax on nonprofit organizations and policy groups at the annual Brookings Papers on Economic Activity.

At the Brookings conference, Zucman claimed that Piketty’s next book—entitled Capital and Ideology following common Marxist terminology and published by Harvard University Press—will advocate for a ninety percent wealth tax on billionaires, according to the New Yorker. “Really,” Zucman told a New Yorker reporter, “you could abolish billionaires if you wanted to.”

Two questions remain: first, are the analyses of Piketty, Saez, and Zucman even correct? This has been disputed in many (though admittedly fiscal conservative and libertarian) publications and events since the release of Piketty’s Capital In the 21st Century. In fact, dozens of essays arguing against his analyses and solutions having been collected into a book, “Anti-Piketty,” published by the Cato Institute.

Second, even if their analyses are correct and far too much wealth is being concentrated at the top, causing the destabilization of society, why is soft socialism through a massive wealth tax the only answer? For instance, in the United States, moving money around in a calcified and stressed economy will not fix the fundamental problem of the productive sectors of the economy having all been shipped overseas. Job growth, wage growth, and the ability to be solvent and pay debt on both the individual and national levels will truly aid us. But socialism is not guaranteed to bring any of that, and historically has brought the opposite: