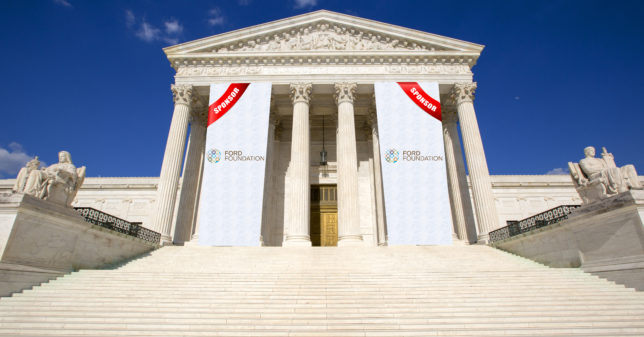 The Ford Foundation has long sought to use its vast wealth to reshape the legal landscape. But until recently it has focused on influencing various left-wing nonprofit law firms and indoctrinating the nation’s law students.

But after the recent death of Supreme Court Justice Antonin Scalia, the foundation’s passive indoctrination transformed into an aggressive campaign to permanently change the landscape of the nation’s jurisprudence.

The nomination of Mr. Garland could upturn a court whose many 5-4 decisions reinforced basic rights such as religious freedom, free speech, and the right to bear arms. If the Ford Foundation gets its way, those decisions could become 5-4 in the other direction overnight.

We know that, in recent years, The Ford Foundation has used its vast sums of money (2014 assets: $12.4 billion) to ensure that individuals become weaker and smaller, while government becomes larger and stronger. While building up collectivism, solidifying inequality, and promoting the government’s status quo, the foundation has created precedents that outline its true goals and mission.

With this understanding of the Ford Foundation, we can infer that its support of confirming a judge like Merrick Garland comes purely in the name of ensuring a left-wing legacy for the nation’s highest judicial body.

The Ford Foundation has moved from misinforming young legal minds to aggressively trying to change the future of our nation. This could indeed be a threat to many of the basic freedoms we hold dear.

For more on Ford’s machinations at the high court, you can read the June edition of “Foundation Watch” here.

This blog post was adapted from the June edition of Capital Research Center’s “Foundation Watch,” by Fred Lucas.