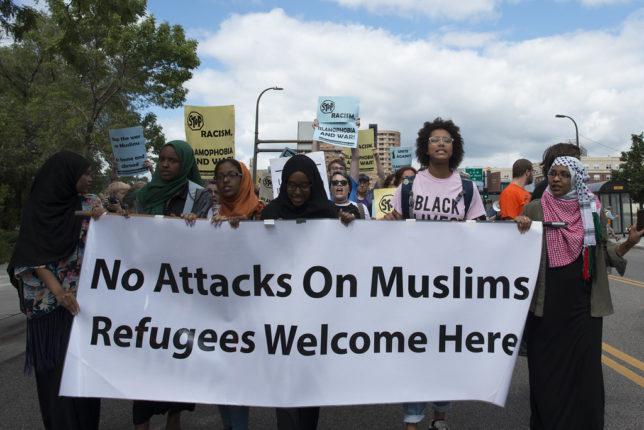 The Rights, Faith, and Democracy Collaborative (RFDC) is the Proteus Fund’s newest donor collaborative, launched in March 2017. RFDC might be considered the successor to the Civil Marriage Collaborative; where the CMC helped guide the campaign to legalize same-sex marriage nationwide, RDFC funds litigation groups to support lawsuits against religious exemptions to laws requiring businesses to serve gay marriages or recommend abortions. As Proteus puts it, the RFDC “fight[s] against discrimination under the guise of religious liberty.”

Between 2017 and 2018, RFDC distributed nearly $1.9 million to a slew of left-wing policy and litigation nonprofits, including the ACLU and state affiliates of the union-backed Jobs With Justice, Religious Coalition for Reproductive Choice, Catholics for Choice, Center for Civic Policy, Interfaith Alliance, and Planned Parenthood.

RFDC doesn’t tag which lawsuits, if any, its grants are intended to be used for. But many of its grantees push the limits of religious freedom and free speech.

The ACLU, for example, sued the 86 hospitals in the Roman Catholic-run Trinity Health System in 2015 for allegedly using “their religious identity to discriminate against, and harm, women.” Its complaint stemmed from the pro-life provisions of the Ethical and Religious Directives created for Catholic hospitals by the United States Conference of Catholic Bishops, which “reaffirm the ethical standards in healthcare that flow from the Church’s teaching about the dignity of the human person [and] provide authoritative guidance on certain moral issues that face Catholic healthcare today.” The ACLU alleged that Trinity Health System discriminated against women with pregnancy complications by not providing them abortion services. A federal judge dismissed the case in 2016.

When the case began in 2012, same-sex marriage was prohibited in Colorado. Nevertheless, a gay couple who planned to marry legally in Massachusetts ordered a wedding cake from Masterpiece Cakeshop; the owner, Jack Phillips, declined on the grounds that as a Christian he did not bake cakes for gay weddings. The gay couple sued the shop under Colorado’s anti-discrimination laws, and the Colorado Civil Rights Commission ordered Phillips to change his business practices, train his staff on avoiding discrimination, and make quarterly reports regarding steps Masterpiece Cakeshop had taken towards compliance with the commission. In June 2018, the Supreme Court ruled 7-2 in favor of Phillips that the commission had violated his First Amendment freedom of religion.

RFDC itself receives significant support from the Arcus Foundation, which gave it $300,000 in startup funding in 2017. Arcus spends heavily on pushing LGBT activism; in early 2019, the foundation consolidated its four “social justice” programs into a single fund emphasizing gay and lesbian advocacy. It now pushes three goals: pro-LGBT education, gay and lesbian rights, and support for LGBT activism. Arcus is the main philanthropy of Jon Stryker, a billionaire Democratic donor and husband of Democracy Alliance co-founder Patricia Stryker, who is widely credited with orchestrating the Democratic Party’s takeover of Colorado in the mid-2000s.

The Themis Fund is Proteus’s contribution to the campaign to abolish the death penalty. Themis was created in 2007 to direct funding to litigation groups, such as the Center for Death Penalty Litigation and the Death Penalty Information Center. The name is derived from the Greek goddess Themis, who represented divine law and is often depicted holding the scales of justice.

Funding for the Themis Fund comes from Atlantic Philanthropies, the Tides Foundation, Voqal, Wallace Global Fund, the Fund for Nonviolence, and the Butler Family Fund (which receives substantial funding from the Swiss-based Oak Foundation).

Themis itself is managed by Rebecca Rittgers, a former LGBT program director for the Arcus Foundation who also worked as a consultant to the Civil Marriage Collaborative. The fund is also connected to the 8th Amendment Project, a project it created in 2014 and transferred to the Center for Death Penalty Litigation in 2018.

According to a 2015 Buzzfeed article, Themis gave the 8th Amendment Project a $1 million annual budget and six full-time staffers led by Henderson Hill, an attorney who led the Center for Death Penalty Litigation in the mid-1990s and a North Carolina anti-death penalty group before that. (Hill left the project in April 2019 but remains on its advisory board.)

As its name suggests, the 8th Amendment Project’s goal is to bring a lawsuit against death penalty policies to the U.S. Supreme Court as a violation of the U.S. Constitution’s prohibition on “cruel and unusual punishments,” enshrined in the 8th Amendment. Until then, the group attacked death penalty policies at the county and state level. To that end, it supplied talking points to at least one state official: Florida 9th Circuit Court state attorney Aramis Ayala, who announced in March 2017 that her office would stop seeking the death penalty in applicable cases.

In April, it emerged that Ayala took advice from “justice reform groups”—including the 8th Amendment Project—as far back as January, even though the state attorney claimed she had made the decision not to seek capital punishment shortly before her March announcement. That “advice” included talking points from the 8th Amendment Project which bore a close resemblance to Ayala’s own announcement.

Since the transfer of the 8th Amendment Project to the Center for Death Penalty Litigation, it isn’t clear what Themis Fund does without its flagship project. Data from the service FoundationSearch suggests that Proteus hasn’t made a grant via the Themis Fund since 2015, though it did transfer $270,000 to the Proteus Action League’s Themis Action Fund. (However, no other information exists about the action arm.)

But Proteus did move $1.5 million between 2014 and 2015 through the Themis Fund to fund such efforts as using “the tools of communications and media to erode public support of the death penalty in the U.S.”; developing “analysis of the cost of the death penalty in Washington state as an advocacy tool to advance repeal”; and backing efforts to “educate, organize, and mobilize lay Catholics as advocates working to end capital punishment.”

RISE Together and the RISE Together Action Fund are Proteus’s national security-oriented donor collaboratives. They were founded in 2009 as the Security & Rights Collaborative; in 2019, the sister collaboratives were renamed “RISE,” an acronym for “Rights, Inclusion, Solidarity, Equity.”

RISE is one of Proteus’s larger collaboratives; in 2017, Proteus reported spending just over $2.6 million on the program for that year. Since 2015, RISE distributed $5.6 million to left-wing groups. The largest recipient of RISE grants is ReThink Media, a combination nonprofit public relations group and pass-through entity that specializes in developing messaging techniques for other left-wing groups to criticize U.S. national security policy. (For reference, ReThink is heavily funded by the Ploughshares Fund, which Obama National Security Advisor Ben Rhodes hailed in 2016 as an effective “echo chamber” in drumming up support for the 2015 Iran Nuclear Deal.)

While RISE is a Proteus Fund project, ReThink receives Proteus grants to manage the project’s activities. ReThink (through RISE) teaches activist groups how to write pro-Muslim, pro-refugee letters to the editor, op-eds, and social media posts, even providing groups with specific wording it considers effective.

RISE promotes Islamic art and culture in its campaign to popularize Islam with Americans, providing talking points for potential questions from hostile interviewers. “If confronted with media questions on ‘the Muslim view’ of homosexuality,” one of the group’s statements reads, “we suggest the following”:

The Muslim faith is very diverse and views on homosexuality are just as varied and complex as they are among Jews, Catholics, Evangelical Christians, and other denominations. There is no such thing as a ‘Muslim view’ of homosexuality, but any decent person from any faith tradition should denounce this horrible hate crime—just as they should denounce any hate crime.

Disturbingly, RISE assembled damage-control fact sheets following multiple terrorist attacks by radical Muslims in Paris in 2015 and the 2016 Pulse nightclub shooting in Orlando, Florida. To that end, the group called the Paris terrorist attack “an attack on our collective community” that cannot be allowed “to divide us against each other,” calling for solidarity with “Muslims in France and the rest of the world.” The fact sheets framed the terrorist attacks as detached from Islam itself, criticizing instead unnamed individuals for supposedly using the violence to foster “bigoted statements [that] often lead to hate crimes against innocent community members.”

“Every religious tradition explicitly condemns the killing of innocent people,” the group wrote. “Murder knows no faith.” The fact sheet then encouraged readers to join one of ten “Peace4Paris” vigils in the U.S. organized by the agitation group MoveOn.org (which failed to identify the perpetrators as Muslims).

It also recommends the discredited Southern Poverty Law Center (SPLC) as a factual source for commentators to draw upon. In October 2016, ReThink co-published the SPLC’s Field Guide to Anti-Muslim Extremists, a heavily criticized document which included in its blacklist Muslim political activist Maajid Nawaz for his criticism of radical Islamists. Nawaz sued the SPLC, which settled with him in June 2018 for $3.4 million.

While no clear list of RISE’s donors exists, grant descriptions suggest it has received significant funding from the Ford Foundation, Soros’s Foundation to Promote Open Society, the Akonadi Foundation, and Firedoll Foundation.

In the next installment of The “Dark Money” Shape-Shifter, learn how Proteus plans to get involved in the 2020 election.