The Court of Memes: Why people believe fake facts

A meme, as it’s called by experts in communications theory, is an idea that spreads in the manner of a virus from one person to the next. You may be familiar with the use of the term to describe a particular sort of meme, a graphic commentary of the type often posted on Facebook.

People can be infected with false memes as they are infected with viruses. How many of us believe that 97 percent of scientists believe in Global Warming theory, or that Columbus was warned he might sail off the edge of the world, or that the United States was responsible for wiping out most of the American Indians and taking their land, or that Thomas Jefferson, who was in favor of slavery, probably fathered one or more children with Sally Hemmings? All false memes.

In the worlds of politics and public policy, false memes often have very real effects, providing the basis for bad laws that hurt people, or twisting people’s view of history to make them easier prey for extremist politicians.

As I write this, the radio in my office is carrying news from the funeral of Michael Brown, the convenience store robber who, on August 9th in Ferguson, Missouri, assaulted an Indian-American store clerk half his size.  The attendees reportedly include three White House officials (three more than attended the funeral of Margaret Thatcher, who helped Ronald Reagan save the world; http://www.foxnews.com/politics/2014/08/25/more-white-house-officials-at-michael-browns-funeral-than-thatchers) and prominent anti-Semite and anti-immigrant activist Al Sharpton (http://www.wnd.com/2012/03/sharpton-whacks-homos-n-word-chinamen; http://www.realclearpolitics.com/articles/2010/08/05/newsweek_whitewashes_al_sharpton_106619.html).

Outside the church, a vendor sold tee-shirts with the catchphrase “Hands Up Don’t Shoot.”

►The Baltimore Sun (http://www.baltimoresun.com/entertainment/music/midnight-sun-blog/bal-schwarz-releases-ferguson-inspired-hands-up-dont-shoot-baltimore-club-track,0,1865928.story) reported on a record producer who created “ ‘Hands Up Don’t Shoot,’ a political Baltimore Club track that not only samples Blaqstarr’s classic ‘Hands Up Thumbs Down,’ but also source material straight from Ferguson. You can hear protesters chanting ‘Don’t shoot,’ tear gas grenades being fired and the uncomfortable high pitch from the police’s Long Range Acoustic Device.”

►In an NBC story (http://www.nbcnews.com/storyline/michael-brown-shooting/missouri-school-kids-chant-hands-dont-shoot-n184691):

Children on a school bus held their hands in the air and chanted “Hands up, don’t shoot!” as their vehicle passed the spot where two St. Louis city police officers shot and killed a black man brandishing a knife Tuesday.

The gesture has gone viral after being used by protesters demonstrating against the police killing of Michael Brown, an unarmed black teenager, three miles away in the suburb of Ferguson.

The ripple effects of Michael Brown’s death and the subsequent community response in Ferguson, Missouri, have been felt and talked about in Indianapolis and left the seat of one city county councilman very hot.

The Kheprw Institute held a forum Sunday based on the catchphrase, “Hands Up. Don’t Shoot,” which has come to symbolize the reaction of the St. Louis suburb after the unarmed teenager was shot to death by a police officer.

►When the Washington Redskins defensive backfield took the field for a game on Monday Night Football, they raised their hands in the Hands Up gesture. Brietbart.com reported  (http://www.breitbart.com/Breitbart-Sports/2014/08/19/Redskins-Hands-Up):

“We just want to show our supporters what’s going on in St. Louis,” safety Brandon Meriweather said after the game. “We just wanted to show support.” Meriweather, hardly known for hands-up passivity, fired at several thieves in 2006 who had shot a friend in the buttocks. . . .

The on-field demonstration was the brainchild of Meriweather and cornerback DeAngelo Hall. Second-year safety Phillip Thomas told the Washington Post that in raising his hands he was “just going with the program.”

►The Huffington Post reported on a cover of the New Yorker magazine (which, as we noted last week, lied blatantly in its account of the Brown shooting):

The latest cover of The New Yorker is a bold statement about recent events in Ferguson, Missouri, a city roiled by the shooting of unarmed black teenager Michael Brown.

The image, which is on the front of the magazine’s Sept. 1 issue, shows people holding up their hands under the glow of headlights from a police vehicle. 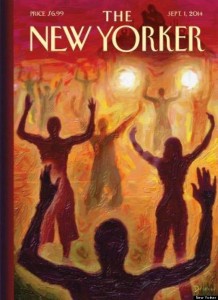 The “hands-up” gesture has come to be a symbol of protest after a police officer shot Brown earlier this month. His death has sparked demonstrations in Ferguson and violent confrontations as police crack down on protesters.

Artist Eric Drooker told The New Yorker that the cover has a personal meaning for him.

“An artist friend of mine was killed by a cop in lower Manhattan, back in 1991,”Drooker said. “He happened to be black, and the police officer was never indicted.”

Tellingly, neither the New Yorker nor the Huffington Post seem to have checked out Drooker’s story, or whether the shooting of his friend was justified. For some people, journalism is just too hard.

►Here are the covers of Time and Bloomberg Businessweek: 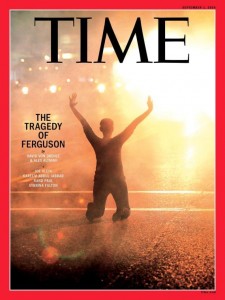 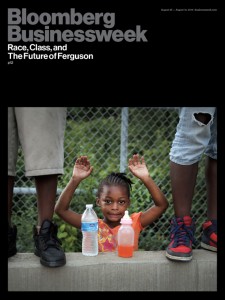 What actually happened in Ferguson: Within 10 minutes of committing robbery and assault at the QwikTrip store, Brown, together with his accomplice, Dorian Johnson, encountered a police officer. An altercation took place, and Brown was shot and killed under circumstances that are currently under investigation.

The accomplice, Johnson, claimed later that Brown had been shot from behind while he held up his hands in surrender.  Two other witnesses later backed Johnson’s account, although at least one of the two changed her story when it was reported that an autopsy showed Brown was hit in the front.  Johnson, it should be noted, has served jail time for lying to the police. Other witnesses said that the 6’4”, almost-300-pound Brown hit the officer in the face, possibly breaking his eye socket, and tried to take his gun away (which would have put the officer in mortal danger).  At this point, no one seriously claims that Brown was running away with his hands up when he was shot.

Yet the Hands Up image is the one people remember, and probably the one that people will remember decades from now.

This was like many other tragedies–the shooting at Columbine (in which two victims of bullying by athletes shot a girl for saying she believed in Jesus, except that none of that was true); the murder of Matthew Shepard (who was killed for being gay, except that he wasn’t); the shooting of Trayvon Martin (he was an innocent who looked 12 years old and was assaulted by a white guy, probably a wealthy Jew, except that none of that was real). In each case, most people heard a version of the story that they continued to believe, in whole or in part, even after it was proven false.

Once an idea is formed in our minds, it’s hard to get rid of it, for reasons that have to do with how the brain works.

It’s said that the human brain operates on only 15 watts of power, and that it gets about 400 gigabits of input per second, of which it can fully process (to the point of awareness) about 2K—in other words, half of one percent of one percent of one percent of one percent.  People can only remember about 34 gigs of information per day, the input of about 1/12 of a second. So the brain uses algorithms and other tricks, other shortcuts to handle all that info. We see patterns where none exist, from the Man in the Moon, to the Martian canals seen by oldtime astronomers (’twas the scientific consensus!), to the faces many people see today in pictures of Martian rocks. Indeed, there’s a part of the brain dedicated to finding faces; it’s so powerful that we can’t stop ourselves from seeing faces in drains, automobile grilles, and smileys. A circle, two dots, and a partial circle, and we see a Have-a-Nice-Day face!

Our pattern-recognition ability allows us to recognize a famous image from just a few pixels, or to see a wild beast moving through the tall grass.

When our brains detect a pattern, we actually get a little high, a shot of the brain-chemicals with which we are rewarded for activities such as sex. When a pattern is revealed to us, it becomes hard-wired. For example, if you play a garbled audio tape of a person speaking, with the words just below the level of decipherability, people will be unable to guess the words that were spoken. If you then tell them the words, they will henceforth hear the words clearly, even if you do nothing to change the audio.

Similarly, babies’ brains process the sounds of the surrounding world, sorting sounds into speech and non-speech. This wiring is hard enough that people’s accents—which are largely grounded in the fact that each language has sounds that are absent from some other languages—persist for life. Henry Kissinger, an immigrant at age 12, still speaks with an accent.

This recognition of patterns, if repeated, eventually becomes hard-wired. The wiring of our brains dictates that the more often a “fact” is repeated, the more we accept it.

As noted on a History Channel program by Natalia Mehlman Petrzela of the New School, most people have heard this poem:

And gave her mother forty whacks.

When she saw what she had done,

She gave her father forty-one.

…and, as a consequence of hearing that poem, most people know that Lizzie Borden was convicted of killing her parents with 40 whacks for her mother and 41 for her father.

In fact, it was her stepmother who was “whacked,” and it was 18 or 19 times, and her father was whacked 11 times, and Lizzie was acquitted.

Lizzie Borden was ultimately found guilty, though, in the Court of Memes. That’s a court about which Officer Darren Wilson of Ferguson, Missouri is just beginning to learn.