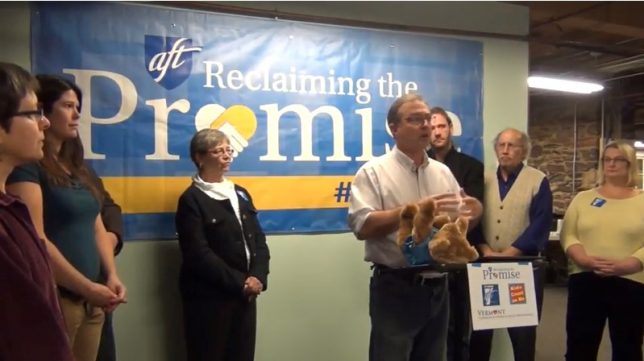 The hearings dragged on for more than ten weeks—long enough for opposition to form. Long enough for extremely popular groups like the Boys and Girls Club and the YMCA to decide they didn’t like our plan because it might lead to their folks being organized too. A caucus of anti-union providers began to form in the field and came to the hearings to voice their opinions. In other words, the grease came off the pig and it was slow roasted.

Time to switch to the piñata strategy, get ready to take some blows. We began a pressure campaign that forced the bill out of that committee and onto the House floor. Early results showed us more than 20 votes shy of a majority. More pressure, more phone calls from providers. Wait, this bill doesn’t create a union, our providers argued; this bill merely gives us the chance to decide if we want a union. Who wouldn’t support such a mild piece of legislation? A handful of true believer ECEs made hundreds and hundreds of calls to swing votes forcing the bill out of the House in the last days of the session. To AFT Vermont, it felt like we had won the marathon; in reality we hadn’t progressed past mile five. The Senate loomed before us and we would still need a signature from the governor. The Vermont Senate at that time was the place where labor bills went to die, turned into zombies that unions had to kill themselves. Vermont legislative sessions last for two years. The House struggle took up the first year; we needed to get the bill out of the Senate in the spring of 2012 or start the miserable process all over again.

Then the Senate President came out against our bill. I went in to talk to him about the project personally; sure he would see the value of bringing thousands of new members into the union. There, they might be efficiently mobilized and brought to serve our own political ends. But I quickly realized he was dead set against our plans, that he saw only votes against him in the shape of those potential voters. The meeting went wrong as it became clear he would fight us every step of the way. He then increased my “Big Union Boss” street cred by accusing me in the press of threatening him and attempting to extort his vote. I owe the man that small bump in my perceived machismo.

A bruising fight loomed to get the bill out of the Senate. We used the time-honored bedrock union strategy: Agitate and Polarize. These twin fists animate every union organizing fight. The Senate president would be the bad management Boss in our union smackdown and the rest of the Senate would be like our shop floor. We would agitate until we knew we had 16 votes out of the 30 senators. When we did, then we would polarize the workers (excuse me, senators) by getting the bill to the floor for a vote. Not until the last few days of the session did we reach a paltry 16 votes. But just as in most union drives, the bad management Boss can be the best organizer. The Senate president spoke too often and too flippantly about our “Ladies in Blue,” the caregivers coming to the statehouse every day, and thereby alienated several female senators. This fight had turned ugly, by parliamentary standards, with both sides using every trick in the book. When we made it onto the legislative calendar for the session, the Senate president just skipped over us! Then came points of order and rulings and votes to overturn the rulings. At last, late one night we got the vote we needed to declare a rhetorical victory: We had prevailed in a heroic struggle, won the vote on the Senate floor over the Senate president’s vocal opposition.

The reconciliation process would have to wait until next session; climbing the next mountain would happen next year. Still, we had made our point: we were a union that would fight until we won.

Unfortunately, problems in the field only grew more difficult with each passing week. Suddenly, at public events we could always count on an energetic “vote no!” contingent showing up. By this time, our organizers were exhausted; many of them had been working long hours for years; keep in mind most organizing drives last about 12 months! We were now in the fifth year of our drive, with no end in sight. Our straw house now began to shake and quake in the wind.

Then, about this time, two other very powerful unions, AFSCME and SEIU, started their own projects to organize home healthcare workers—another unit of about 7,000 quasi-public employees. These unions quickly took advantage of the chaos we had created. The Senate president wanted to rehabilitate his pro-union credentials while sticking it to AFT Vermont at the same time. Just to spite us, it seemed, he made sure the home healthcare worker drive went forward on greased tracks. This, while we were starting our drive all over again. Of course we supported the efforts of AFSCME and SEIU, and knew our suffering had paved the way toward what seemed like an easy victory. Still, it burned to see the smooth path available to them, a path worn flat out by our fight.

As the 2014 session came to an end, the U.S. Supreme Court issued a decision that gutted both projects. SCOTUS wisely declared these kinds of quasi-public employee unions would have no right to collect agency fees, the money that even non-members have to pay to the union. Suddenly, similar organizing projects deflated all over the country, the hiss of escaping hot air could be heard in union halls from Maine to Oregon.

The reason is simple. Autonomous workers and small business people simply aren’t genuine bargaining units. Organize like hell and maybe we could achieve something like a 20 percent membership rate; the remainder would be paying agency fees. The sheer manpower needed to reach these workers all across the state made any such projects unfeasible. Also, the stressful work fostered a high turnover rate. Really, there’s no way around the bottom line: mass identification with the union did not exist among childcare providers.

Even making use of agency fees, the union wouldn’t have been able to fully fund even a single staff position. We would always need subsidies from other locals in the state. Without agency fees to prop us up we might have dragged down the rest of the union. Many reasoned we were in too deep to get out. More sunk-cost rationalizing. But how could we abandon the workers and the dreams we had forcibly implanted in their minds?

In the conclusion of The Babysitters’ Union, see how the AFT’s effort to unionize childcare providers fared after a grueling political battle.