The Babysitters’ Union: A Big Idea for the AFT 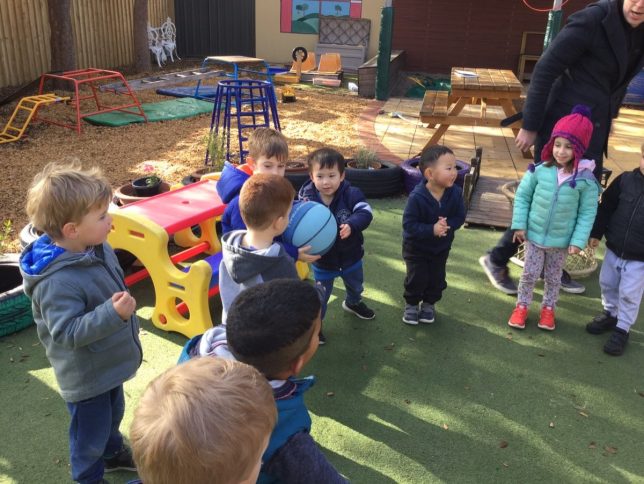 Babysitters. The Ladies in Blue. Childcare workers. ECEs, Early Childhood Educators. Whatever name you use, they dominated my life from 2009 until 2014. Not that I was a toddler in need of care, rather I had become treasurer of AFT Vermont in 2009 and the quest to organize childcare workers and bring them into the union became my chief concern. Naturally, I was thrilled the national union was offering to fund a new organizing director position for that purpose—even though I’d never heard the terms “early childhood educators” and “unions” mentioned in the same sentence before or given two seconds’ thought to organizing them.

I was a rank-and-file activist then, not a professional organizer or union revolutionary. Far from it: I’d grown up in a conservative evangelical home in Oklahoma. But life’s vicissitudes led me to Vermont, and I raised my hand to volunteer as treasurer of the statewide union at the convention in 2007. I didn’t know a lot about either the blunt business end of the union nor the pointy organizing end. I was about to grasp onto both.

Eventually, I came to consider ECEs from three different complementary angles, all of which intersected at the union: First, unionizing ECEs offered a way to professionalize and lift up the important people who did this work; second, they represented the next front in the effort to organize all workers, everywhere; and third, enlisting ECEs beneath the union banner was a way to radically increase our union’s political power.

Regarding professionalizing the childcare workforce, we in the union made an analogy to public schoolteachers from around the turn of the twentieth century. We reminded people that a century ago, teaching was a marginalized vocation. Teachers were herded around the school system like cattle, paid little and respected less. Mass unionization changed that, we said, and now teachers, well respected, could expect reasonable compensation for their work. But where could we find the modern-day equivalents of the harassed teacher circa 1900? Certainly not among the pampered university professoriate with their unassailable tenure and their summers off. No, our new category of put-upon workers desperately in need of a union existed at the far end of the spectrum; they were the people who watched children from ages 0-3. This field, overwhelmingly female, performed vital work and earned little respect and low wages.

PULL QUOTE: Our new category of put-upon workers desperately in need of a union were the people who watched children from ages 0-3.

Target fixed; propaganda campaign launched: Ages 0-3 are the most vital years of a person’s life, we repeated ceaselessly to all who would listen; and during these years the most important controllable factor is the adult in the room, the ECE. We argued that organizing would do for the average ECE what it had done for K-12 teachers. Of course, we were vague on the details, on how exactly unionizing would bring about an anticipated ECE status-rise, but very insistent that it would. Indeed, one of our central strategies was to present ourselves as the only viable agents for the professionalization for ECEs. This insistence made a sharp hook to draw childcare providers, slowly, inexorably, like reeling in a line, to the idea of a union.

The second angle of our strategy acted like cat-nip on the professional organizer types. Like the drunk man who walks along with a wall on his left and wonders why he keeps falling over to the right, unions just had no where else to expand: Most public sector workers were about as densely organized as possible, at close to 30 percent; meanwhile private sector union density fell and keeps falling and is now below 9 percent. Theoretically, that leaves 50 percent of the workforce available for union organizing efforts, but that’s about as useful and relevant as the tens of thousands of tons of gold inside the earth’s core. It just doesn’t matter because you can’t get to it. Organizing wins in the private sector will continue to happen only fitfully.

So, on this sparse terrain childcare providers became tempting targets for hungry unions. But how were you supposed to organize these elusive creatures anyway? They inhabit a darkish sector of the economy. Beyond direct rearing by immediate or extended family, the union organizer finds a mixture of cash-under-the-table neighborhood babysitters (the high school girl next door) and amateurish childcare centers both licensed and non.

Needless to say, untold thousands of childcare providers exist in every state; with no actual employer of record an organized opposition to the union seemed unlikely. Compared to organizing nurses, the childcare unionization effort would be a cakewalk, right? Indeed, for those unions that got in early, pickings were good; unfortunately, AFT wasn’t one of the early birds. Too late to win and just in time to be gutted by Harris v. Quinn, the Supreme court case that called unions’ bluff on the whole notion. But I’ll come to that matter in due course.

Then, the union found a fertile field for its efforts: childcare workers who participated in a publicly funded program that subsidized childcare for families meeting an income threshold. Eureka! We argued that since these workers were paid by the state they were really a bargaining unit of public employees. Granted, a special type of public employee, a public employee nonetheless. Except that, of course, they weren’t. These childcare workers, independent contractors, and small business owners, received 1099s from the state at the end of the year, not W2s like real employees. But we left the sticky details up to the lawyers and drafters of bills. The solution was simple: pass a law that simply defined the state the employer of ECEs and they become employees, with a wave of the magic governmental wand. If we could create the political will for that kind of union overreach, no stack of 1099s in the world would stop us from finding a way to make it work legally.

Did I say creating the political will? Exactly. Here comes the third angle: The campaign to organize ECEs was as much a political campaign as an organizing campaign. We would have to pass a very finely stuffed legislative sausage that would first define the state as the employer, then define the bargaining unit, and set out narrow limits to define what we could bargain over—basically ECE pay rates, then create the election protocols and tell the state labor board how to treat these people. Oh, and since the average ECE was a contractor or small businessperson, we’d need to give them all an explicit exemption from anti-trust laws.

This kind of union offers a direct political payoff: Unions can communicate with their members on political issues and even about candidates, just as any other membership organization can. So here were thousands of folks who could be manipulated for political gain. And consider this: the average ECE saw five or six families twice every day. By bringing these other folks into our political fold, we could make a powerful political machine that touched every corner of the state. All this political chicanery got better with every fresh analysis: ECEs tended not to vote in high numbers; we would thus be bringing new voters to the polls, bulking up turnout vis-a-vis the nurses and professors who made up most of our membership.

In the next installment of The Babysitter’s Union, find out how the AFT’s organizing strategy led to sunk-cost analysis and circular logic.