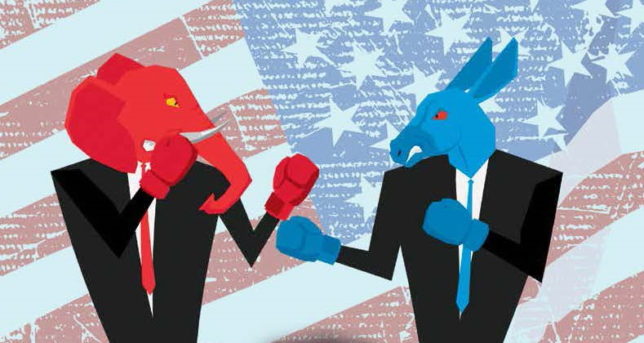 The age of misinformation and the division of Americans along party lines is headed down a slippery slope as partisan politics has led to the inclusion of more polarizing far-left and far-right ideas, and the exclusion of any alternatives.

If current events are proving anything, it’s that blind allegiance to parties in a two-party system can be dangerous.

Due to social pressure, there are fewer opportunities to be independent of political affiliation. Political ideology is associated with morality and individuals attach themselves to a political party as single-issue voters dedicated to narrow policy ideas on abortion or healthcare, for example.

Americans are told they must associate with a certain political party as a matter of morality. This leads people to choose a political party—or worse, an ideology—based solely on what they are told is right or wrong.

People choose political candidates and affiliations based on individual beliefs but are left with officials who may make decisions with little to no regard for the beliefs of the constituents that got them elected.

The two-party system is partly to blame. It gives people a sense they have only two choices. Since most people only vote within their party, politicians have the freedom to push as radical an agenda as they would like so long as they are consistent within their party.

Political parties create a platform for certain agendas, often influenced by donors and politicians influenced by those donors, that seek only to compete with the opposing party candidate and his/her agenda.

However, since there are only two parties viewed as having opposing ideologies, and people already have determined which of those ideologies is moral, politicians are often not representative of the constituents that elected them.

The positions politicians take are, to an extent, guided by public opinion; or at least exist in the confines of what is considered accepted by the public. However, we live in a time where false information has more influence than factual information.

In 2018, MIT conducted a study suggesting false news is 70 percent more likely to be retweeted and reaches 1,500 impressions six times faster than real news. False news spreads faster and reaches more people than real news. People are being misinformed at a greater rate than they’re given facts.

Unconditional party affiliation is what George Washington warned about. People struggle to find agreement but still believe in political parties that magically match each individual ideology and require no scrutiny.

In fact, people criticize opposing political parties without batting an eye at their own. Parties, therefore, have absolute power over the base and it’s a problem spiraling out of control.

People are voting, rioting, and campaigning based on lies and misinformation instead of thinking for themselves and supporting candidates that best represent them rather than parties and big pocketed donors.

This article first appeared in InsideSources on October 8, 2020.