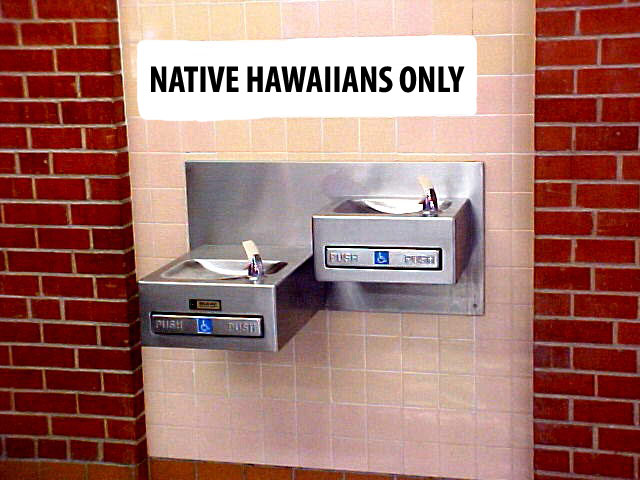 Is this Hawaii’s future?

A real-life secessionist movement seizes a historic American landmark and major media outlets treat the uprising as a curiosity of mere passing interest. Meanwhile, that same media gives a thumbs-up to a seditious, balkanizing plan for Aloha State apartheid.

AP’s Mark Niesse reported yesterday, “Native Hawaiian sovereignty advocates” who are members of the group known as the Hawaiian Kingdom Government occupied the grounds of the palace of Hawaii’s final monarch, Queen Lili`uokalani. “Hawaiian activists have long used the palace as the site for protests of what they call the United States’ occupation of the islands, but never before had they physically taken control,” wrote Niesse.

Pacific Business News reported that the “protesters” surrounded the Iolani Palace in Honolulu, chained palace gates, posted no-trespassing signs, and told “palace officials that the palace is their rightful seat of government.” The PBN story noted that “Only those with Hawaiian blood, as well as news media, were initially allowed onto palace grounds.”

The Honolulu Advertiser reported that the “sovereignty group” claimed its actions were “not a protest or demonstration but a reoccupying of its legitimate seat of government.” CNN called the occupiers simply a “group of native Hawaiians.”

Are members of groups like the Hawaiian Kingdom Government serious insurgents or fringe-element kooks who are best ignored? Only time will tell, but one thing is for certain: a Hawaiian segregation bill will only make things worse, guaranteeing more such occupations and perhaps future violence.

Many mainstream media outlets have treated the pro-segregation, pro-secession bill, sponsored by Sen. Daniel Akaka (D-Hawaii), that would create a new government for “Native Hawaiians” in Hawaii, as just another bill. A sunny piece called “Freshman senators hold key to Native Hawaiian bill’s hopes,” appearing in The Hill, a Capitol Hill newspaper focused on Congress, noted cheerfully that “the bill has a fighting chance.”

Both Honolulu papers, the Advertiser and the Star-Bulletin have editorialized in favor it.

Der Stürmer The New York Times salivated over the bill (which Akaka keeps reintroducing with each new Congress). In an editorial called “A Chance for Justice in Hawaii,” the NYT says fears about the bill are all hype:

The bill’s central aim is protecting money and resources – inoculating programs for Native Hawaiians from race-based legal challenges. It is based on the entirely defensible conviction that Native Hawaiians – who make up 20 percent of the state’s population but are disproportionately poor, sick, homeless and incarcerated – have a distinct identity and deserve the same rights as tribal governments on the mainland.

The Akaka bill does not supersede the Constitution or permit Zimbabwe-style land grabs. It explicitly forbids casinos, a touchy subject in Hawaii. Any changes a Hawaiian government seeks would have to be negotiated with state or federal authorities. As has always been the case on those eight little islands, everyone will have to find a way to get along.

Of course, to find out what’s really in the bill it’s necessary to read George Will. Will scathingly criticized the legislation and pointed out that Akaka doesn’t even deny the bill could set the stage for Hawaii to exit the Union. Will wrote:

Today, the Native Hawaiian Government Reorganization Act, when accurately described, is opposed by a large majority of Hawaiians and supported by only a bare majority of the approximately 240,000 Native Hawaiians in the state. The legislation, sponsored by Sen. Daniel Akaka, is a genuflection by “progressives,” mostly Democrats, to “diversity” and “multiculturalism.”

It would foment racial disharmony by creating a permanent caste entitled to its own government — the Native Hawaiian Governing Entity — within the United States. The NHGE presumably would be exempt, as Indian tribes are, from the Constitution’s First, Fifth and 14th amendments. It would, Akaka says, negotiate with the state of Hawaii and the United States concerning “lands, natural resources, assets, criminal and civil jurisdiction, and historical grievances.”

Reparations? We shall see. Independence — secession? “That could be,” Akaka, 83, has said, depending on “my grandchildren and great-grandchildren.”

Predictably, Akaka himself denounced Will for writing the op-ed, calling the factually accurate column “disgusting.” Will had noted in the column that the racial purity panel the bill creates will determine who is a Native Hawaiian and therefore eligible to receive any entitlements or programs created by the new office.

My guess is Will got Akaka’s goat when at the top of the op-ed he inserted this entirely appropriate quotation that associates the bill with Nazism:

“I decide who is a Jew around here.” — Hermann Goering in 1934, when told that a favorite Munich art dealer was Jewish.

Just about anybody who’s anybody in the Hawaiian establishment supports this bill, including Hawaii’s Republican Gov. Linda Lingle, who has visited Washington, D.C., repeatedly to lobby federal lawmakers. The Republican In Name Only (RINO) governor has been pushing for the legislation for years.

Passed in the fall of 2007 by the U.S. House of Representatives, the proposed Native Hawaiian Government Reorganization Act of 2007 (a companion bill to Akaka’s legislation), introduced by U.S. Representative Neil Abercrombie (D-Hawaii), could be taken up by the Senate as soon as this month. According to http://www.nativehawaiians.com/, the measure is endorsed by: the Mexican American Legal Defense Education Fund (MALDEF); the National Council of La Raza; the League of United Latin American Citizens (LULAC); and the National Association for the Advancement of Colored People (NAACP).

Senator John Kyl (R-Arizona) is the Senate’s foremost opponent of the legislation. He calls it a “recipe for permanent racial conflict … motivated by a desire to immunize government preferences for Native Hawaiians from constitutional scrutiny.” Senator Lamar Alexander (R-Tennessee) said the legislation “is about sovereignty. It is about race. We are taking a step toward being a United Nations and not the United States.”

Contrary to an article in The Nation, the GOP presumptive presidential candidate, Senator John McCain of Arizona, does not support the bill (though in 2005 he did send out confusing signals about it). Democratic Senators Hillary Clinton and Honolulu-born Barack Obama both support it.

It should also surprise no one that Hawaii’s Kamehameha Schools, arguably the most powerful private entity in Hawaii, wants to safeguard its privileges and racially discriminatory admissions policy by supporting the measure the Akaka bill.

For more on the Akaka bill, the racial separatism of the Kamehameha Schools, and accusations of abuse of power that surround the Schools, read “Racial Separatism in the Aloha State: The Bishop Estate Trust and Hawaii’s Kamehameha Schools,” by Phil Brand, James Dellinger, and Karl Crow, which Capital Research Center (my employer) just published.