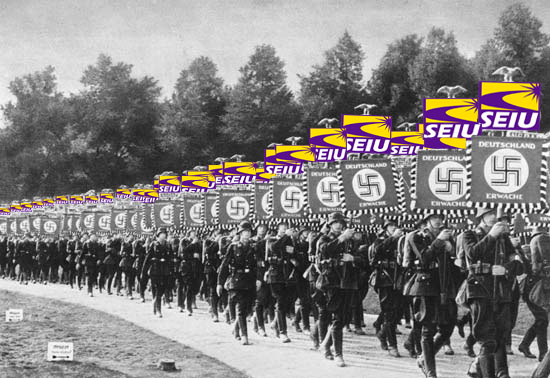 A bit of an exaggeration perhaps, but you get the idea.

Long after purple shirt-wearing SEIU goons beat up conservative activist Kenneth Gladney outside a Missouri healthcare town hall meeting, not much has happened.

Almost three months after the incident the wheels of justice are spinning VERY slowly, Glenn Beck said on his TV show earlier this week.

the incident happened August 6th. Charges were filed. Gladney went to the hospital. Immediately, the Democrats brought in a high-powered attorney to defend the SEIU thugs who were charged with assault and it just kind of disappeared.

Flynn noted that the case has “disappeared within the jurisdictions of those individuals who are part of Buffy Wicks’s truth squad.”

Flynn is referring to Wicks, now deputy director of the White House Office of Public Engagement. As the leader of the Obama campaign in Missouri, Wicks organized an “Obama truth squad.” Flynn said she

Wicks also helped to oversee the infamous National Endowment for the Arts teleconference in August in which the Obama administration openly encouraged artists to produce pro-Obama art as political propaganda.

Naturally, the left has responded with vicious attacks on the victim, a diminutive black man with diabetes. Perhaps in the eyes of leftists Gladney hasn’t learned his “place” in society.

Watertiger at firedoglake calls Gladney “Joe the Dumber” and describes him as a “teabagging wingnut who tripped and fell while getting in the face of an SEIU member.”

Wndycty at Democratic Underground calls Gladney a “fraud” and a “fool.”

TBogg mocked Gladney and his injuries, calling him a “Teabagging Drama Queen,” and adding, “If the teabagging people weren’t such rage-filled imbeciles they would be the most adorable slow children on earth.”

Bronte17 at the far left hate site Daily Kos refers to Gladney as a “‘Don’t Tread on Me’ dork” and as ” a mouthy dork in a dark tan polo.” (That sounds a lot like “uppity” black, doesn’t it?) The blogger also suggests Gladney is suing SEIU because it has deep pockets. “[H]mmm… wonder if they think union money is easy pickin’?”

Oliver Willis, who works for the George Soros-backed slime factory Media Matters for America, inverts the perpetrator-victim relationship calling  Gladney “the black conservative who is the current poster boy for the thug right.” Willis can’t get the sequence right on his blog’s tagline either, “Like Kryptonite To Stupid.”

Wonkette derided Gladney as “the biggest whore in history. Like 100 times more whorish than Joe the Plumber and the world’s entire collection of actual street-walking prostitutes combined.” [emphasis in original]