Spinning the Iran Deal to the Media: Elite Philanthropy Disguised as Grassroots Activism 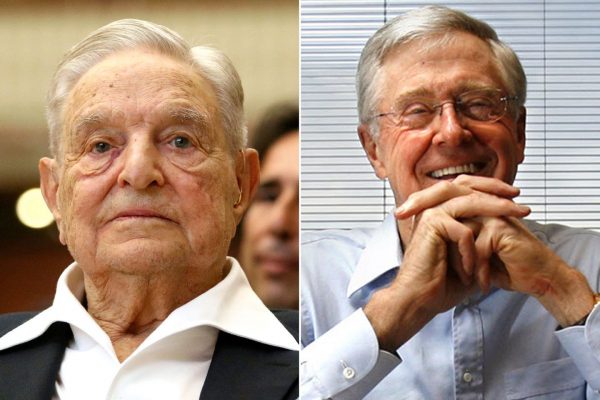 Flying slightly under the radar—eclipsed by the new dismal jobs report and the continued debate over COVID lockdowns—are the high-level talks to reenter the Joint Comprehensive Plan of Action (JCPOA), better known as the Iran deal.

The light media coverage means that many Americans may be unaware of the heavy funding—and strange bedfellows—pushing the Biden administration to reenter the Obama-era Iran nuclear deal. Curiously, Iran seems determined to violate the provisions of the agreement to create leverage to convince member nations to lift sanctions.

One weirder aspect of this almost certain return to Middle East diplomacy of the early 2010s is the aligning of ostensible political enemies under a new foreign policy think tank called the Quincy Institute for Responsible Statecraft.

Two of the best-known funders of the Quincy Institute are progressive billionaire George Soros and libertarian icon Charles Koch. This alliance makes it quite reasonable that Tablet Magazine recently referred to the new think tank—which purports to embrace the idea of restraint in foreign policy—as something of a strange chimera.

According to its application for tax exemption filed with the Internal Revenue Service in July 2019, which Tablet has obtained, Quincy’s purpose would be “to educate the public about ‘restraint,’ a foreign policy grand strategy developed by interdisciplinary academic thought-leaders,” and to support scholars who “generally argue that in regions where the US possesses vital interests, it should lead with diplomacy.” The institute’s titular director and president is Andrew Bacevich, a historian, former U.S. Army colonel, and a widely respected if sometimes overwrought proponent of the idea that a military-industrial complex has hijacked American society. The IRS document identifies Trita Parsi, head of the National Iranian American Council [NIAC] until 2018, as another one of Quincy’s co-founders and as its executive vice president. The tax exemption application lists Parsi’s estimated compensation at $275,000 a year, compared with $50,000 for Bacevich—a fair indication of who is actually running Washington’s weirdest and most intriguing foreign policy shop.

The new brain trust seems to have grown out the “echo chamber” Obama adviser Ben Rhodes bragged about to the New York Times Magazine back in 2016. Rhodes said in that interview the Obama administration went to great lengths to identify “who was going to be able to carry our message effectively” and how to leverage “outside groups like Ploughshares” to facilitate the “legions of arms-control experts [that] began popping up at think-tanks and on social media, and then became key sources for hundreds of often-clueless reporters.”

Parsi was the founder and leader of NIAC for 16 years, an organization that was the focus of a January 2020 letter from Sens. Ted Cruz (R-TX), Tom Cotton (R-AR), and Mike Braun (R-IN) to the U.S. attorney general asking for an investigation into potential Foreign Agents Registration Act violations by NIAC. “NIAC’s relationship with the Iranian regime and its role amplifying regime propaganda in the United States have been the subject of discussion in Washington D.C. for years,” the senators wrote.

Perhaps most interesting is NAIC’s tendency, as detailed by Dominic Green in the Jewish Chronicle, to present itself “as a grassroots organization but [that actually] depends on large donations from the Rockefeller Foundation and none other than the Ploughshares Fund. Similarly, the Quincy Institute claims to represent a groundswell of popular opinion, while taking donations from the Koch brothers and George Soros.”

Like J Street, the Soros-funded left-wing group that the Obama administration embraced, these groups claim to represent a constituency in DC. In reality they’re “astroturf” groups, reflecting the political ambitions of their founders and the often misplaced idealism of their funders.

While Quincy does have respected non-interventionist scholars in their stable, such as Andrew Bacevich and Stephen Walt, Green’s concern is that Quincy has adopted Rhodes’s strategy of spinning the media using elite philanthropy disguised as grassroots popular opinion.

“In the Quincy echo chamber, everyone agrees that Israel is a problem and that the Abraham Accords are bad,” he writes. “The goal is to spin first the media and then public opinion towards agreeing that a nuclear Iran is a great idea. If that’s responsible statecraft, then Trita Parsi has a civilian-use nuclear program to sell you.”

by Robert Stilson on November 30, 2022
Philanthropy