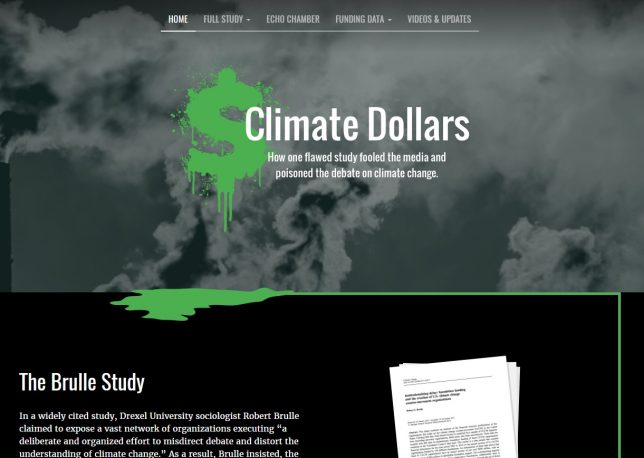 Capital Research Center is proud to launch ClimateDollars.org, a new website debunking the widely cited Brulle study on so-called climate deniers and revealing the truth about who really funds the debate on climate change.

“For years, global warming alarmists have claimed a massive conspiracy works against them. At every opportunity, activists like Brulle misrepresent the work of those who take a scientific approach to the issue of climate change and exaggerate their impact on the public debate. With this analysis, we attempt to correct for Brulle’s inflated numbers and sloppy assessment, and we more accurately analyze the relative size of advocacy on both sides of the debate. This is the beginning of an ongoing effort to better understand what we’re fighting about.”

In a still widely cited study, Drexel University sociologist Robert Brulle calculated that from 2003 to 2010 right-leaning organizations funded the “climate change counter-movement” with an average of $900 million annually. This led the mainstream media to suggest that conservative organizations spend nearly $1 billion each year to combat climate change action.

ClimateDollars.org reveals serious flaws in Brulle’s study. Instead of using Brulle’s sloppy methodology of measuring the income of right-leaning organizations, ClimateDollars.org measured their spending—and found a radically different result. Dr. Allen finds that the inflated Brulle Number of $1.51 billion (for 2010) plummets to $0.1 billion—a decrease of 93 percent.

For more information, to download the study or our data, or to watch the video series on this debate, please visit ClimateDollars.org.