Should We Be Bear Food?

Update: A version of this story ran in the American Spectator on 10/22.

You remember this age-old story, I’m sure.

Environmentalists harass man for defending himself.

Jim West, of British Columbia, Canada, was attacked by a bear on October 4th as he inadvertently walked between the bear and her cubs.  The bear knocked West down multiple times before he was able to grab a large stick and bludgeoned the bear to death.  Conservation officers later put down the bear’s cubs.

Since the attack, emails impersonating West have been sent to members of the local press by animal rights activists claiming that he maliciously killed the bear and that he could’ve easily escaped the situation.  He’s also been receiving phone calls.

“One woman asked me why I killed the bear and why I didn’t run away. Well, you can’t outrun a mother bear,” said West who is recovering from the 60 stitches to his skull, upper lip and left arm he received in the attack.

“It was a matter of survival and I’m sorry people are upset about it, but it was live or die.”

Apparently, the animal rights activists involved in this smear and harassment campaign believe that human beings would make better bear food than healthy, contributing members of society.  This is an excellent example of environmentalism gone crazy.  Even PETA (People for the Ethical Treatment of Animals), typically the vanguard of such ridiculous campaigns, has denied any involvement in West’s case.  It’s scary when even PETA is on the side of common sense. 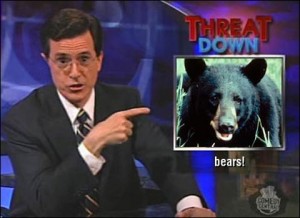